New Anchorage 'social club' cares for those with Alzheimer's 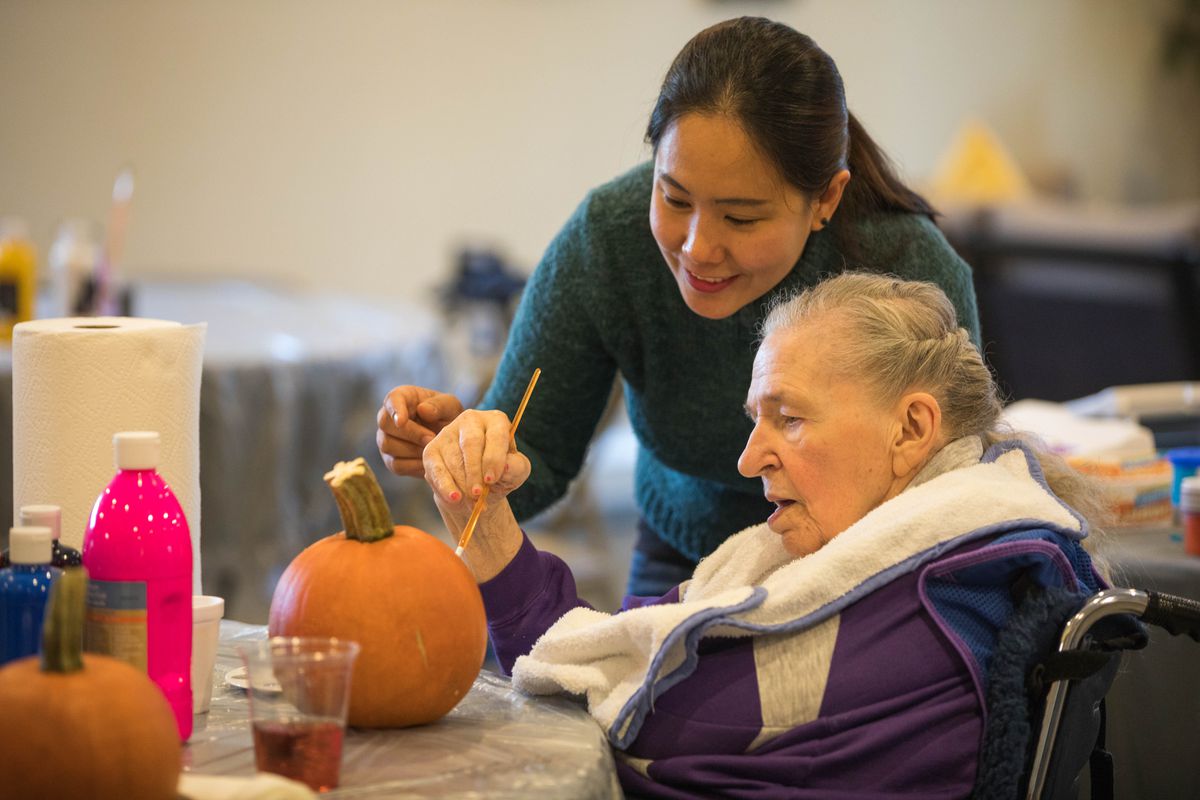 On a recent Thursday morning, inside a building that used to be a church, a handful of seniors and caregivers gathered around a table to decorate cookies and paint pumpkins. In a computer room next to where the group had congregated, a 3-month-old pig named Bacon zigzagged about.

Kori Mateaki opened Turnagain Social Club — a new adult day-services facility — because she said she saw a need for a social gathering place for the elderly where staff also cared for people with degenerative disorders like Alzheimer's disease. The facility is nestled in a West Anchorage neighborhood, located a few blocks away from the Rustic Goat restaurant.

Mateaki has years of experience working as a nurse and running assisted living homes. Alzheimer's has also touched her family. Her grandmothers both developed the disease.

"I really saw that we needed more cognitive programs. A lot of them just are sitting in their chairs watching TV the entire day, and it's just getting worse and worse," said Mateaki of people with Alzheimer's, the most common form of dementia. "And now that the baby boomers are here, it's only going to multiply."

Roughly 6,800 Alaskans 65 and older suffer from Alzheimer's disease or related dementias, according to a proclamation from Gov. Bill Walker's office that made November 2016 Alzheimer's Disease Awareness Month.

"Advanced age is the greatest risk factor, and Alaska's older population continues to grow at a rate faster than that of any other state … " the proclamation reads in part.

Turnagain Social Club, which opened earlier this month, currently has 15 members and is looking to bring in more.

Play is a cornerstone of the club. Mateaki says she wants members to feel like they're in the midst of an enjoyable retirement and not stuck at a day care. Members' relatives are also encouraged to hang out at the club if they choose.

Jackie Frenzel's parents both have some form of dementia and have been going to Turnagain Social Club. She says she likes that staff tailor activities to specific people.

There's an array of games and entertainment inside the club, including a "man cave" outfitted with air hockey, shuffleboard, foosball and three TVs. Gardening will take place out back when the snow melts. Meals and snacks are also provided. Transportation service to and from the club is in the works.

Tools designed to help people with dementia are also scattered across the 7,200-square-foot space. Light therapy, said Mateaki while standing next to a bright light used for that purpose, can help reduce insomnia or daytime sleepiness that often accompany Alzheimer's.

Next to her was a realistic-looking baby doll in a crib. Doll therapy is sometimes used to calm people with Alzheimer's, who can experience anxiety and agitation because of the disease, she explained. Some people know it is a doll while others will care for it as if it's a real child.

"It's not for everybody, but the difference is just really profound," she said of people who find comfort in the dolls.

Living things are also incorporated in caring for members at the club. During a Thursday tour of the building, Bacon the pig meandered around the facility, wagging her skinny tail.

Mateaki will also bring in a dog, rabbit and hamsters for emotional support, but "it depends on who's allergic to what on what we bring in for the day," she said.

Turnagain Social Club's 12 full-time staff members are trained to help people with Alzheimer's, but Mateaki says the space — open 8 a.m. to 5 p.m. Monday through Friday — should appeal to all seniors. Private pay rates are $90 for four hours and $23 for each additional hour, but she says most long-term care insurances pay for their services. The club also has Medicaid certification.

The club was made for seniors, but Mateaki says she hopes it provides some respite for caregivers and families.

"Caregiving is so taxing. And here they can either come and enjoy this time and not be responsible for them or they can leave and go to work," she said. "They can go home and do the laundry. Take a nap."

For Frenzel, a place like Turnagain Social Club also provides her some peace of mind regarding her 90-year-old mom and 89-year-old dad.

"With this, I know that they're gonna be safe and taken care of and washed and they get some interaction with people, their peers," she said.