'No greater gift': Alaska Airlines captain will donate a kidney to one of her flight attendants 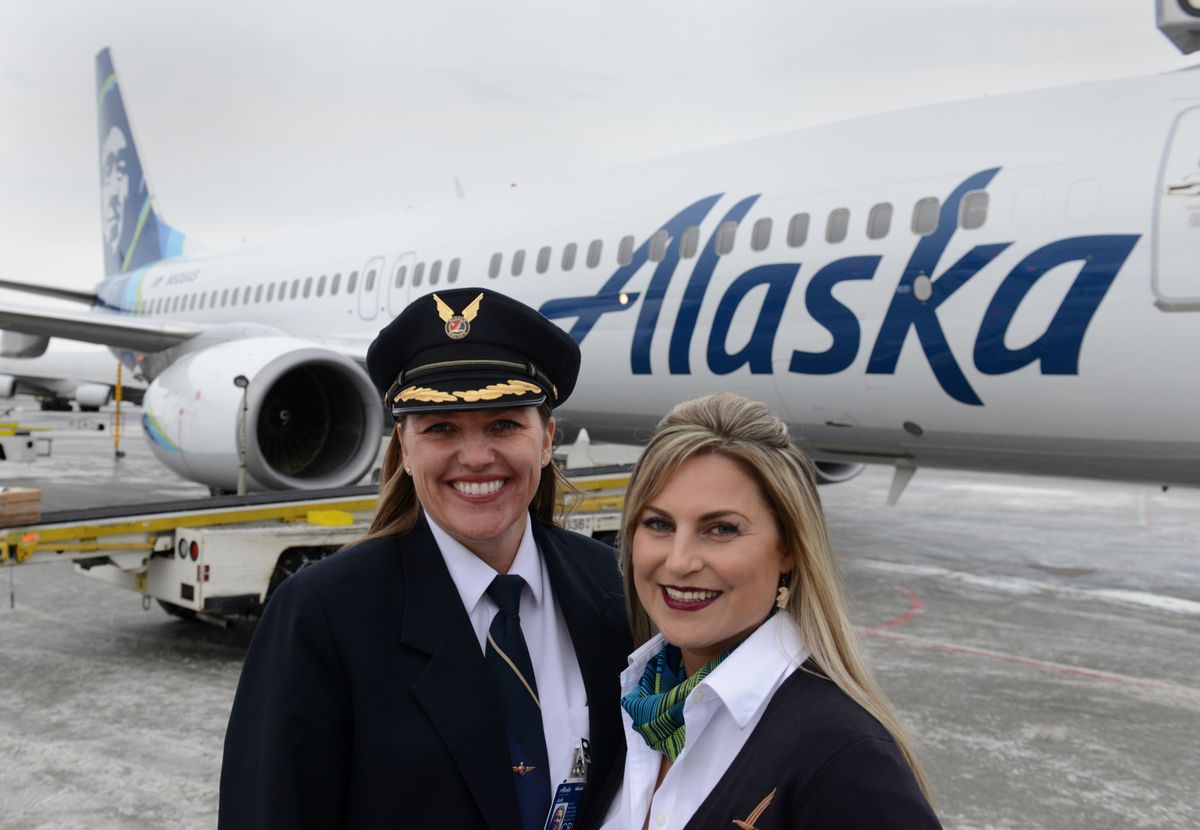 Jodi Harskamp and Jenny Stansel sat side by side Friday afternoon in a terminal at the Ted Stevens Anchorage International Airport, speaking in quick, free-spirited banter.

Stansel's kidneys are failing, but you'd never know it. You also might not guess that the excited, upbeat conversation between the two Anchorage-based Alaska Airlines employees involved a major surgical procedure.

On March 13 — almost exactly a year after Stansel learned how sick she really was — the two will again be side by side. This time, they'll be on operating tables at the Swedish Organ Transplant Center in Seattle.

Harskamp is donating one of her kidneys to Stansel, which will both prolong and vastly improve Stansel's life.

Stansel, 38, is a flight attendant with three teenage children. She's originally from Fairbanks, and moved to Anchorage in 1999. Chronic kidney disease spurred by lupus has affected Stansel's life for 15 years.

Harskamp, 41, is a captain, married with two young children. She moved to Anchorage in 2006 from the Bay Area in California.

On Friday, the pair considered what name to give to the life-saving organ.

"Maybe Jo-Diva," Harskamp said, a combination of her first name, "Jodi," and "diva."

"We haven't decided yet," she said.

"We'll name it when we see it, 'cause we actually haven't seen it yet," Harskamp said, and the two laughed, half-joking, but also serious that they wanted to see pictures and video of the now tentatively named "Jo-Diva."

They first met in December 2012, when Stansel knocked on Harskamp's door, lasagna and wine in hand. Harskamp's house had just burned down and she was staying in temporary housing. Alaska Airlines had asked employees to help out, and Stansel was one of the first to show up, Harskamp said.

Ultimately, that house fire was what brought Harskamp to her decision to become an organ donor, she said.

"When you survive something as horrific as that … you have to look at yourself in the mirror and say, 'What am I doing? Why am I ignoring all of the suffering in the world?' " Harskamp said.

When Stansel asked for a kidney, Harskamp knew it was her calling.

'I had been sick for a long time'

Stansel doesn't remember what it feels like to be healthy. For more than a decade, she's managed her kidney disease through diet, exercise and self-care.

"I had been sick for a long time. I was just hiding it really well," Stansel said.

On March 10, 2016, Stansel went from working on a flight, to sitting in a passenger chair, to the emergency room. Her doctor told her that had she not come in, she would have had three days to live.

After that, Stansel stopped working. She began ongoing dialysis — hooked up to a machine that performs some of the kidney's critical functions, flushing waste from the blood — for more than 10 hours every night.

"It's like being in prison," Stansel said. Her current condition is end-stage renal disease — the last leg before kidney disease leads to death.

Kidneys are vital to sustaining life. The organs — about the size of a fist — remove waste, regulate salt and potassium levels, and control red blood cell production, among other roles, according to the National Kidney Foundation.

When kidneys stop functioning property, waste and excess fluid can build up in the body, creating a wide range of problems.

There are more than 98,000 people in the U.S. waiting for a kidney transplant, according to national Department of Health and Human Services data. Kidneys make up the bulk of the major organ waiting lists.

Luckily, you only need one healthy kidney to live. That makes transplants possible, with a high success rate, according to the foundation.

After Stansel learned of her diagnosis, she decided not to sign up for the national waitlist. Instead, she let every Anchorage-based Alaska Airlines employee know she was looking for a kidney donor. She told the airport vendors. She carried donor applications in her purse.

"I did ask everybody. I would ask people what their blood type is. You would be surprised, a lot of people don't know," Stansel said, who is O-positive.

Harskamp was one of the first people to sign up. She was adamant that she would be the one to donate, the women said.

Many others signed up to donate their kidney, but Harskamp ended up being the only viable match.

Risk, cost and the greatest gift of all

But all surgery comes with the potential for complications. Harskamp talked to dozens of kidney donors, including seven other pilots who have all been able to return to work, when making her decision to donate. Her family supports her, she said.

"There is a risk, and I've done a lot of soul searching. And I find that the reward in all of this is far greater than the risk, for sure," she said.

The only dark cloud that hung over the conversation Friday was when Stansel was asked about costs.

Dialysis equipment alone costs $30,000 a month, she said. Insurance covers most of it, but not all. There's also blood work, urine tests, doctors visits.

"I don't want to talk about the costs because it's very overwhelming, and I'm trying not to think about that. That's going to come later," Stansel said.

As the donor, costs are limited for Harskamp. Stansel's insurance pays for the preoperation tests and the procedure itself. She will pay for her hotel stay as she recovers in Seattle.

She noted that potential donors without the means to donate can request reimbursements through the National Living Donor Assistance Program.

Despite the risks, costs and potential complications, the two women were excited Friday, and full of joy.

"It's going to be life-changing for both of us. And I get to watch (Stansel) live her life," Harskamp said.

"Yeah, and I get to live," Stansel said.

"There's no greater gift than to see somebody walking around with your organ," Harskamp said.

Information about organ donation can be found at the United Network For Organ Sharing, www.unos.org.