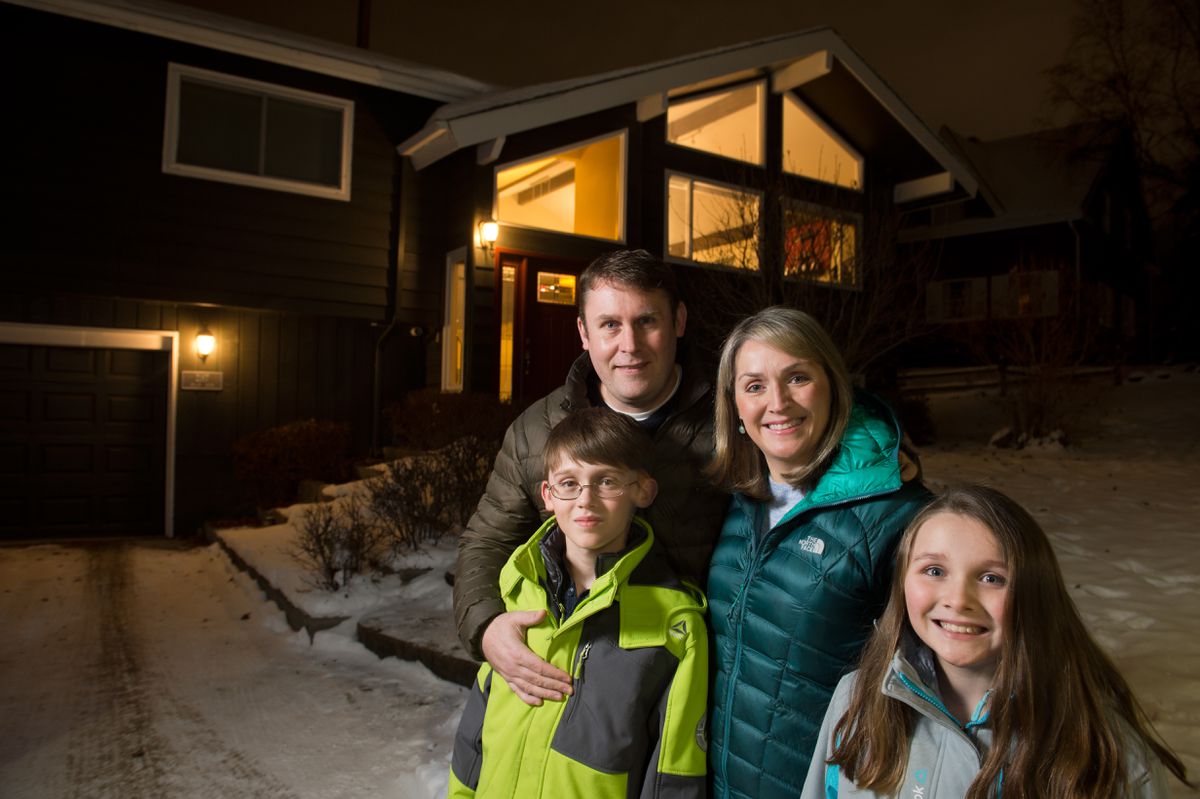 Laura Oates Butcher and her husband long dreamed of starting their own communications consulting business in Anchorage, but there was always one big obstacle: health insurance.

They had insurance for 20 years through Clay Butcher's work with the state. Going on their own meant trying to do a temporary continuation of her husband's plan or buying it on the individual insurance market. Both options for their family of four were as high as a mortgage payment and provided far less coverage, she said.

"It was basically unaffordable," she said.

Then someone told her about Liberty Healthshare, a Christian health care cooperative associated with the Mennonite church in which members directly pay a portion of one another's medical bills. It isn't health insurance, but people who sign up don't have to pay a penalty to the IRS for being uninsured. In Alaska, 19,000 people paid $12 million in penalties in 2016 on their 2015 taxes, according to Alaska Division of Insurance.

The monthly cost for Butcher's family was less than $500. The coverage was more limited than traditional insurance, and they had to sign a pledge that said they believed in God and would follow certain lifestyle guidelines, including exercising and refraining from smoking and heavy drinking. Butcher and her husband launched their business in May and signed up. Their first motivation was practicality, she said.

"I am not a super religious person. I was raised really Catholic and my kids go to Sunday school," she said. "The (religious) community, it's just a bonus."

Butcher and her husband are part of a growing number of Alaskans opting out of the state's individual health care market, where premiums for people who don't qualify for subsidies are among the highest in the country, to join faith-based cooperatives. The Division of Insurance estimates that 10,000 Alaskans are now members of "sharing ministries," said Lori Wing-Heier, division director. Once a niche type of health care for devout religious people, the co-ops are moving into the mainstream.

[Here's how Alaskans get their health insurance]

"We have seen people who all of a sudden have been joining not because they support the health care ministry or the tenets but because it's cheaper in Alaska than the Premera bill," she said.

How the co-ops work

The co-ops, like Liberty, Samaritan Ministries and Christian Healthcare Ministries, do offer a lower-cost alternative to health insurance and allow people to avoid the IRS penalty, but the potential problems with the co-ops are multifold, Wing-Heier said.

They are unregulated, so they can exclude prospective members for pre-existing conditions, cap the maximum amount that one member can receive, and refuse to cover services like birth control or mental health care that don't fit with a group's moral framework. They offer a cheaper sort of coverage to healthy people who would otherwise be participating in the marketplace, she said. When you remove healthy payers from that pool, prices go up for everyone else.

"This market is never going to survive if we don't all pay. We need every Alaskan we can in the individual market for it to support itself and bring premiums down," Wing-Heier said.

When something very costly and serious happens, the part not covered by the healthshare can end up being paid by the government or written off by the hospital, which raises costs, she said.

"If you have a catastrophic injury or chronic illness, it doesn't take long to get to that max," Wing-Heier said.

Each health care co-op has its own set of requirements and way of paying out. Some require members to get letters from their pastor verifying church attendance. Some require members to say they agree with biblical positions on abortion and gay marriage. Some offer members the opportunity to write personal notes to the people whose bills they pay and suggest praying for them.

Most members are responsible for a small amount before their benefits kick in, similar to a deductible in traditional insurance. Certain plans cover some preventive care, others do not.

Co-ops exist to get government out of health care and let people practice a religious approach to paying their medical debts, said Matthew Bellis, chief communications officer for Liberty. The co-op isn't insurance, he said. Rather it's more like crowd-funding or passing a hat in church.

"We want to give people as much freedom and options and opportunities as possible," he said.

He wasn't concerned that some members might be agreeing to the spiritual requirements when they weren't truly held.

"If some people are fudging it, well, that sounds more like thought policing," he said. "If they are signing our statement of shared beliefs, then they are our kind of people."

Though certain pre-existing conditions are excluded, people who are overweight or smokers can join Liberty, but they have to be part of a health tracking program, which includes goal-setting and counselor check-ins, he said.

'We trust in God and we don't do drugs'

Tara Horton and her family of four use Samaritan Ministries to help cover medical expenses. They attend Response Church, a small Christian congregation that gathers in an office building on Northern Lights Boulevard. They were asked about church attendance during the interview to be part of the co-op, she said. They pay $450 to $475 a month directly to another member.

"We get a statement with their address, their name and a little blurb on what their health care need was," she said. "They ask that we say a prayer or write a card of encouragement and we just mail it directly to that individual."

They are both self-employed and have been using the co-op for about a year. Basic medical appointments under $300 aren't covered, and they've yet to have an expense that they need help with, though a friend had her pregnancy and birth covered by Samaritan, she said. They have covered costs from people all over the country including, by chance, those of a friend in Anchorage who was in a car accident.

"It was really neat to pay $450 to a friend and then write a card that says get better soon," she said.

Kristin Platt, 33, just gave birth to her second child. Her husband works in construction, and when she decided to stay home with their children, they bought high-deductible insurance on the marketplace, she said. They qualified for a subsidy that brought the cost of their insurance to around $500 a month. But she watched her husband's pay stubs and pretty soon, she began to fear he was going to make too much money to qualify, which would bump their insurance cost up to $1,500 a month and might require them to pay back some of the subsidies they'd received. So they dropped the insurance. That's when she decided to sign up with Liberty Healthshare.

"You just check the boxes that say that we trust in God and we don't do drugs," she said.

When she pays the monthly premium, an online "share box" lets her know where the money goes, she said.

"I feel like these are God-loving people, whereas insurance companies I honestly feel like are out to screw you."

Platt is still waiting to see how the co-op will pay for the costs associated with her pregnancy and birth. Her midwifery clinic allowed her to bundle all the costs into one bill that she submitted directly, she said, so she did not have to pay up front out of pocket. Many doctor offices don't accept that kind of arrangement, however.

Nancy Baisinger, director of revenue cycle at Medical Park Family Care, a large primary care clinic that sees as many as 400 patients a day, said that they are seeing more patients who are co-op members. Directly billing to co-ops has not worked for them, she said.

"We have a lot of trouble with them," she said.

The co-ops pay doctors' rates that they determine, based on Medicare rates, without any opportunity for the doctors to negotiate, she said. They then assume the doctor's office will write off the rest of the cost of care. The clinic now has a policy that patients who are co-op members must pay their bills in full and wait to be reimbursed.

"It's not that we don't want to work with them. They are not upfront with the providers on how they do business," she said.

Butcher said that deciding to leave the individual market came with "some guilt." The choice is better for her family but not great for the system overall. Her family has the means to pay smaller medical bills up front, she said. That's a barrier for some people, and, if the bills are serious, it will be a barrier for her too. There just aren't any perfect options for self-employed Alaskans, she said.

"Do I deny my family great health care and an opportunity to launch our own business? … I don't live in a bubble and think that this isn't coming without consequences," she said. "I know the system is broken because it doesn't work for everybody."