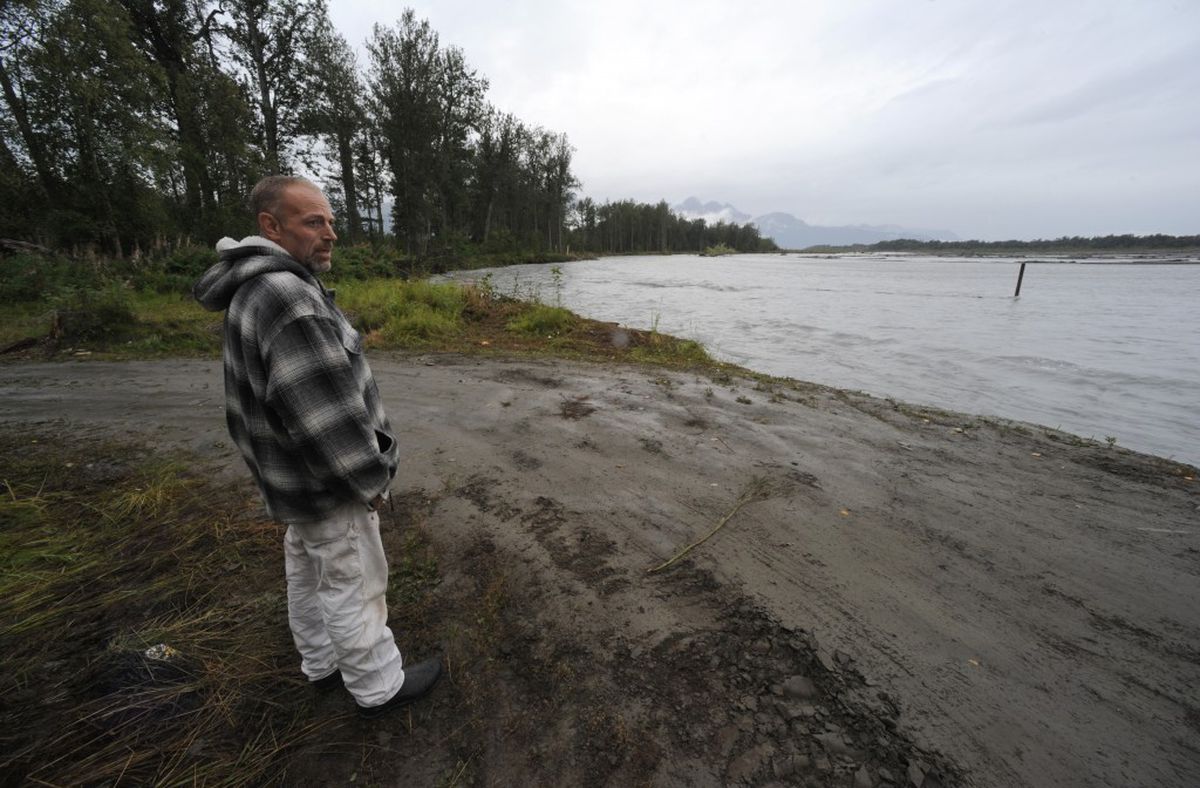 PALMER — Gov. Bill Walker on Monday declared a disaster in the face of potentially destructive flooding along the Matanuska River in Butte.

The declaration came following a request from the Matanuska-Susitna Borough for state assistance because "the severity and magnitude of the imminent disaster are beyond the timely and effective response of local resources."

The Matanuska isn't running high, officials say. Instead, it is quickly eroding a soft bank near Maud Road and poses a potential for rapid flooding with little notice.

Authorities are warning people with homes in the path of the river to consider putting an evacuation plan in place. The river is threatening homes from Mile 12.5 to Mile 15 along the Old Glenn Highway, as well as utilities — including a 6-inch natural gas line — and a bike path.

Roughly 40 properties could sit in the path of potential flooding including 15 with structures on them, according to a flood model developed by the borough.

The borough asked the governor to declare an emergency and assume control of any response. The declaration allows the Alaska Department of Transportation and Public Facilities to protect "critical resources" such as the Old Glenn Highway, according to a statement issued by the governor's office Monday evening. It also taps into federal resources such as the U.S. Army Corps of Engineers and U.S. Department of Transportation.

Mike O'Hare, director of the Alaska Division of Homeland Security and Emergency Management, was on the river Monday afternoon and met with borough officials.

Mat-Su Assembly member Jim Sykes, who represents an area including Butte, said the governor's declaration would give the state and the borough access to emergency funds. He said priorities to stave off further erosion include protecting the river bank on borough-owned land with fallen trees; that appears to have helped downriver. Other potential fixes could include a DOT revetment or gravel-filled bags placed on the eroding bank.

The best-case scenario is the river flows naturally, or with a little help from diversions, moves back to the middle channel and away from land. Worst case is it keeps eating into the bank, dumps into a lower-elevation channel, and floods a few miles of land.

"If it breaks through, it's game over," Sykes said.

The same area suffered flood-related property damage in 2012 when the rain-swollen river threatened the Old Glenn before state transportation officials dug a trench to protect the road. About a dozen homes flooded or fell in the river.

About two-thirds of a flood dike installed in the 1980s washed out years ago. The remaining section is vulnerable to the main river's force, as is a long section of unprotected bank.

Pat and Dan Huddleson, who own property near the river and maintain an active Facebook group watchdogging government response, stood near the eroding bank in the rain Monday afternoon.

"What really needs to happen is they need to put rip-rap down here," Dan Huddleson said. "And it needs to be maintained."