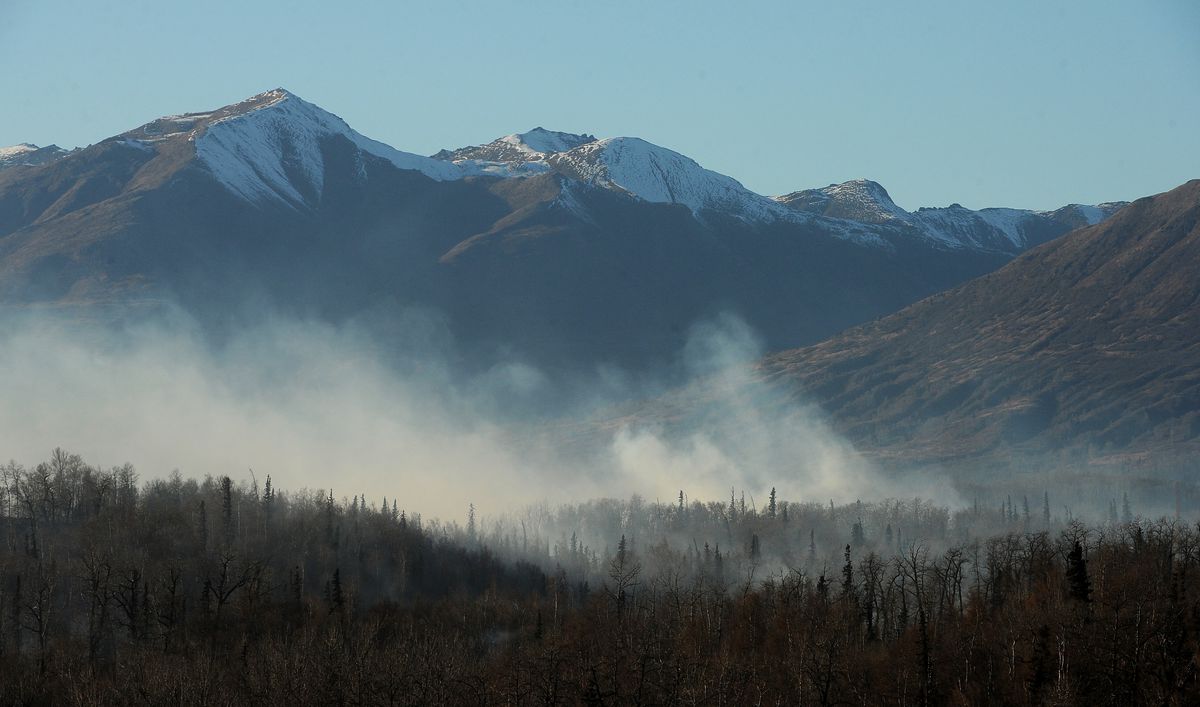 PALMER — Firefighters spent Saturday battling a late-season, wind-driven wildfire near Sutton that was estimated at 215 acres and burning alongside the Glenn Highway.

Two structures near Mile 56 of the highway were threatened but as of late Saturday had been protected by fire crews, state fire officials said.

The blaze, named the Moose Creek fire, is in the area of the Palmer Correctional Center. Though the facility wasn't in danger as of late afternoon, officials evacuated all the inmates and bused them to other Southcentral facilities, said Corey Allen-Young of the Department of Corrections.

The medium- and minimum-security facility had held more than 200 inmates before they were moved.

Another challenge: The state laid off its wildfire personnel in the last couple weeks, with the end of the official fire season.

"All our firefighters, technicians, were just laid off in the last couple of weeks," Mowry said. "We're just scrambling, trying to beat the bushes."

By late afternoon, fire managers were hoping to use a bulldozer to create a firebreak line to prevent the flames from spreading to the Moose Creek drainage, the Alaska Division of Forestry said in a statement.

The fire was about 10 acres when the forestry division was alerted a little after 2 a.m. By daylight, it had grown to around 100 acres, said Palmer-based fire management officer Norm McDonald. A helicopter flyover later in the day provided more accurate mapping, said Matanuska-Susitna Borough spokesperson Patty Sullivan.

By nightfall, the size was estimated at 215 acres.

Borough crews from Sutton, Palmer and Butte responded initially. Ultimately Saturday, 40 to 60 firefighters were mobilized from local, state and federal agencies, said Sarah Saarloos, a spokesperson for the forestry divison.

Firefighters have come in from a wide geographic area, from Fairbanks in the north to Moose Pass in the south, she said.

Aside from the residents of the two threatened homes who briefly left to let firefighters protect their structures, there were no evacuation notices as of late afternoon.  Still, fire officials were "asking people to just keep their ears open," McDonald said.

They were also asking residents to stop any open burning due to the wind and check any existing burn piles. There were four smaller fires reported overnight in the borough. Dry conditions and winds are expected to continue through the weekend.

The state asked Southcentral and Interior residents to avoid burning for the next few days given windy and dry conditions in both regions.

The next closest residential areas near the fire are at North Mile 58 and Buffalo Mine roads, he said. Those areas were not threatened yet.

"The good thing is it's in an area with not a lot of structures," McDonald said. "If it gets bigger as long as it just bumps into roads and creeks, it's OK."

For the Palmer Correctional Center, the fire was just one factor in the decision to move the 209 inmates. The facility had already been slated for "repurposing" – part of a cost-cutting program started earlier this year – so the inmates living there had been scheduled for transfer, Allen-Young said.

"Rather than wasting extra money by evacuating and then returning the inmates ahead of the planned move, the decision was made to move them permanently before an evacuation could be ordered," he said in an email.

There were no road closures, but officials are asking drivers to to use care in the smoky conditions, to allow fire equipment to move around and to "help us out by not speeding through that area," Saarloos said.

Caption
Fire officials discus the Moose Creek Fire at a staging area near Sutton, Alaska, and the Glenn Highway on Saturday, October 15, 2016, on Friday, October 14, 2016. A burned area can be seen in the background. (Bob Hallinen / Alaska Dispatch News)
Wait 1 second to continue.

The Federal Aviation Administration has imposed temporary flight restrictions in the area.

The fire was burning in an area of dried grass and hardwood trees, mostly cottonwoods and birch, Saarloos said. "Some of that grass is up to 3 feet tall. It's dry and dead," she said. The grass is "almost freeze-dried, and that is carrying the fire through the forest canopy," she said.

In some ways, conditions are similar to those in spring. But there is an important difference: The ground is dry, lacking any of the snowmelt, Saarloos said. That makes the fire different from those usually tackled in Alaska, she said.

"It's not in the trees and it's not burning in tundra or black spruce," she said. "It's unusual, but unfortunately, our fire seasons are getting longer and longer. It's what is being called the new normal."

Even though fire season is supposedly over, conditions around parts of Alaska are dry and flammable.

There's been little rain south of the Alaska Range this fall, and snow has yet to arrive, Mowry said. "When there's no snow and there's an ignition source and things are dry, you can have a fire."

Aside from the Moose Creek fire, there were six other active wildfires in Alaska on Saturday, including a new 350-acre blaze near the village of Noorvik, according to the Alaska Interagency Coordination Center.

Alaska's fire season has gotten longer over the past half-century, following a trend in the Lower 48, according to a study released last year.

The study, by the science consortium Climate Central, found Alaska's fire season has expanded by about 35 days since the 1950s.

A previous late-season wildfire in Palmer in November 2012 forced some evacuations and a brief closure of the Glenn. That fire, which also burned areas of dry grass, was whipped by winds that gusted up to 50 mph. It was sparked by a burning truck that crashed on Palmer-Fishhook Road.