'Somebody knows': Parents of missing Palmer teen desperate for answers 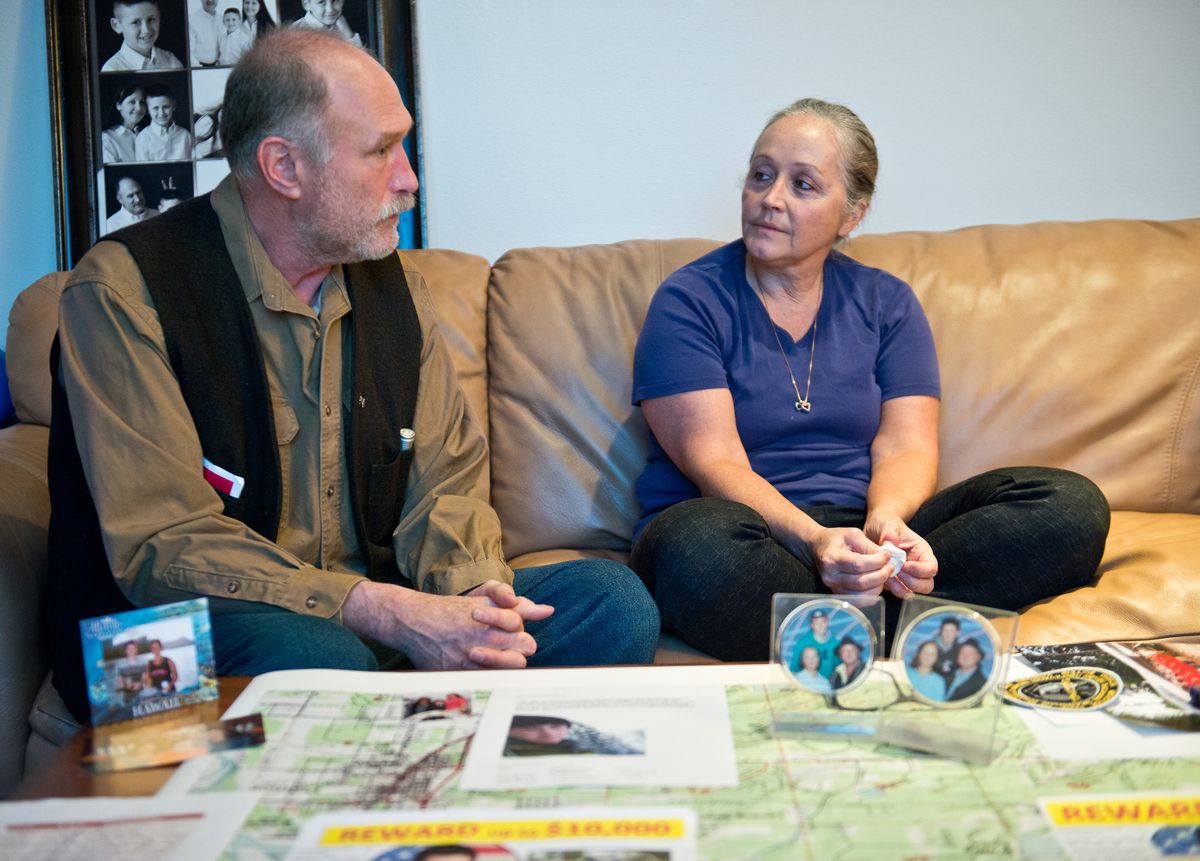 Ben and Edie Grunwald are searching for answers about what happened to their 16-year-old son, David Grunwald. The teen was last seen in the Palmer area on Nov. 13. His Ford Bronco was found abandoned and burned outside Wasilla the following day. (Marc Lester / Alaska Dispatch News)

Ben and Edie Grunwald are searching for answers about what happened to their 16-year-old son, David Grunwald. The teen was last seen in the Palmer area on Nov. 13. His Ford Bronco was found abandoned and burned outside Wasilla the following day. (Marc Lester / Alaska Dispatch News)

PALMER — David Grunwald's disappearance remains a near-total mystery more than two weeks after the 16-year-old from Palmer was last seen. His parents, Ben and Edie Grunwald, spend their days in a desperate quest for a clue to what happened to their normally responsible son.

They don't sleep much at night.

"The bottom line is, we want him back," Ben Grunwald said Tuesday during an interview at the family's home above the Palmer Hay Flats. "We want him back alive. I can't fix the other way."

Edie Grunwald sat on the couch next to her husband with a tissue in her hands, though neither was crying.

They both looked exhausted, but resolute.

The coffee table in front of them was filled with search maps, "missing" posters and pictures of David as a young child.

David dropped off his girlfriend near Butte the night of Nov. 13. Alaska State Troopers say they found his 1995 Ford Bronco before noon the next day, burned to its frame up a dirt track at the base of the Talkeetna Mountains outside Wasilla.

Hundreds of searchers, dogs, horses and even drones combed a wide area — Palmer, Jim Creek, the trail up Bald Mountain Ridge where the Bronco turned up. They found nothing.

The formal searches are over. But authorities are still searching for anyone who knows what happened — and is willing to share that information.

A $10,000 reward paid through Victims for Justice is being offered for information leading to Grunwald's recovery "and/or the arrest of any person(s) responsible for his disappearance." Crime Stoppers is offering a $1,000 reward.

A nonprofit private investigation firm is offering an anonymous tip line where anyone who knows anything — especially other teens or young people — can leave a message at 907-290-8999.

Troopers are still investigating Grunwald's disappearance and seeking any information from someone who saw him or his Bronco Sunday night or Monday morning. The number for Mat-Su troopers dispatch is 907-352-5401.

"Unfortunately, there's nothing new that I have to share about the case," troopers spokeswoman Megan Peters said Tuesday. "I can't imagine how horrible this is for his family and friends."

Brenda Paradise, a private investigator donating the work of her nonprofit to the family, says numerous tips are coming in on the anonymous message line.

None have come from anyone who saw David that Sunday night, Paradise said. But several people advise searchers to "check out" certain names. Others point fingers on social media, a practice she urged people to stop for safety reasons.

"Unfortunately, nothing I'm getting in gives me any idea of where to find David," Paradise said.

Part of the problem, investigators say, is that the few clues they have are widely scattered.

The Bronco turned up about 21 miles and 33 minutes from the house on Smith Road where David dropped his girlfriend, according to a route search by Ben Grunwald and a buddy. Also, at least one cellphone "ping" from David's phone was tracked to a tower near Palmer in the hours after he went missing.

"Somebody said, 'This is a needle in a haystack,' and I said, 'No, I can't even find the haystack at this point,' " Paradise said.

The night David disappeared started off normally, his parents say. Their last words to him as he went out the door were, "Love you."

"Love you too," he responded.

Edie said David called around 6:30 p.m. to say he was dropping off his girlfriend, Victoria, and might be late. His mother factored in the icy roads and said 9:20 p.m. was good.

Adam Mokelke, Victoria's father, has said that David dropped her off around 6:30 or 7 p.m. that night at the house on Smith Road.

The Grunwalds started to worry when David wasn't home at 9:20. Edie called Victoria around 9:40 p.m. and apparently woke her up, she said. Victoria said David had left about an hour earlier. That would have been 8:40, Ben Grunwald said.

So the couple got into the car and drove up and down Smith Road. They thought maybe David had rolled his car or gotten into some kind of trouble on the way out.

They drove the road twice. Then they drove to the troopers post in Palmer and reported their son missing.

Victoria, not long after the first conversation, remembered David had said he might go to see a friend in Palmer.

He never showed up there, Edie Grunwald said.

His parents are stuck with guesses. Maybe he stopped to pick up somebody? Maybe he broke down?

David "talked smack" sometimes, bragging, as his mother put it. But he also checked in often and followed routines.

They are getting few updates on the official investigation, though Edie said she was "hopeful" for resolution after a trooper stopped by Tuesday.

Both are leaning on the resilience of a military background in the U.S. Air Force and Air National Guard; Edie has 31 years of military service and Ben has 21.

David helped friends with rides and advice, his parents say. At least one, they say, thanked David for helping him avoid drugs.

David is an aviation student at Mat-Su Career and Technical High School, where he belongs to the engineering club. He built his own computer and is an avid skier. The Bronco was a fixer-upper, bought from a friend of Ben Grunwald's for $700. David got a code reader and fixed the "check engine" light, replaced the throttle position sensor and the radiator hose. He planned to sell it.

The Grunwalds — with help from friends, neighbors and their extended military family — were spending this week posting missing-person fliers and continuing the search for David.

They urged Mat-Su residents to look for any sign of their son — "Let's just call it a backpack," Edie Grunwald said, rather than something more grim — on dog walks or in rarely used buildings on their property.

They also urged anyone with any information to come forward.

The Bronco was abandoned down a road with just one way in. It's unlikely whoever dumped it walked out alone. That makes at least two people, maybe, who know something, Ben said.

"Somebody knows something," Edie said. "Somebody burned his truck up. Walked away from it. Where's the phone? Where's David?"