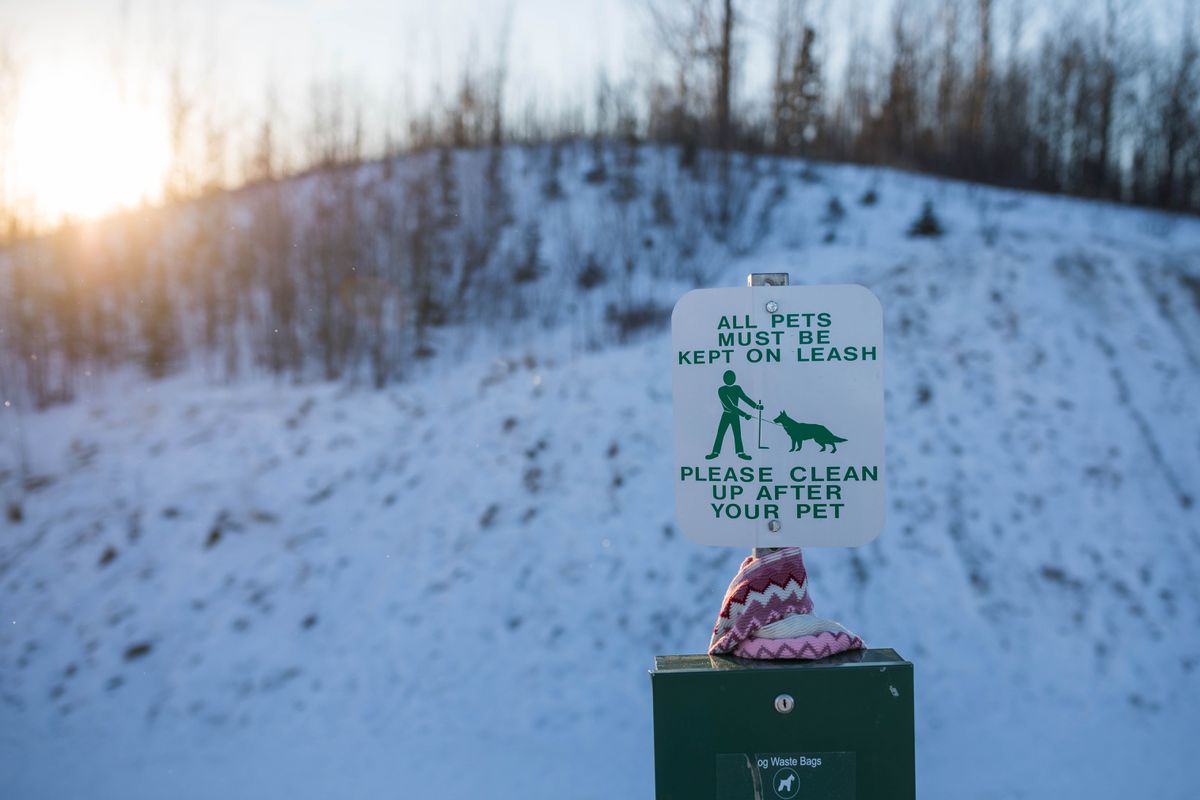 On Friday, Jan. 6, 2017, a sign at the Crevasse Moraine Trailhead in Palmer reminds pet owners to leash their pets while using the trails. The trails are adjacent to areas used by trappers, and occasionally dogs can be caught in a trap or snare. (Loren Holmes / Alaska Dispatch News)

On Friday, Jan. 6, 2017, a sign at the Crevasse Moraine Trailhead in Palmer reminds pet owners to leash their pets while using the trails. The trails are adjacent to areas used by trappers, and occasionally dogs can be caught in a trap or snare. (Loren Holmes / Alaska Dispatch News)

PALMER — Matanuska-Susitna Borough officials are considering a historic ban on traps and snares at schools and along trails popular with dog owners.

The conflict between trailside trapping and pets is on the rise in this growing municipality with frontier roots that's given way to expanding suburbia. The population of Mat-Su topped 100,000 last year, making it the second largest municipality in the state behind Anchorage.

Progress on the proposed borough law comes as winter's trapping season gets well underway and residents report several dogs caught in snares or traps since December in the Knik River Valley and off Archangel Road in Hatcher Pass.

A draft ordinance proposed by borough Assembly member Dan Mayfield of Big Lake and co-sponsored by Matthew Beck from Palmer would ban all trapping on school grounds except for educational demonstrations. It would also bar traps or snares on borough property within 100 feet of the sinuous, hilly trails at the 360-acre Crevasse Moraine trail system near Palmer.

The proposal calls for $150 fines for a first offense, $300 for the second offense and $500 for the third and any subsequent offenses. Violators forfeit their traps.

Numerous Alaska towns and cities already restrict trapping in some way including Anchorage, Valdez, Fairbanks and Juneau. But efforts to address trail conflicts outside city limits have run into opposition around the state.

If Mat-Su does adopt some form of the proposed law, it would mark the first time the borough restricts trapping.

Right now, if a loose dog gets caught in a trap or snare on borough property, the dog owner is breaking the law. The trapper isn't.

Not popular with anybody

The proposed Mat-Su legislation has roots in a petition presented to Mayfield last year by a nonprofit called Alaska Safe Trails Inc. More than 3,500 signers urged the borough to ban trapping on school grounds, at Crevasse Moraine and at Government Peak Recreation Area near Hatcher Pass.
Government Peak isn't included in the proposed draft because of what Mayfield described as "convoluted" land management questions because the area includes state land that the borough manages.

The proposed ordinance that emerged a few months ago isn't supported by either trails advocates or trappers.

"Trappers are kind of giving some pushback because they think this ordinance may be the first step in several steps of outlawing trapping," Mayfield said. "And the folks who are really engaged in providing safe trails in the borough are against it because they don't think it goes far enough."

The ordinance is expected to be introduced for a public hearing at the end of the month, with hearings to begin in February or March.

It's already gone before several borough boards: the Mat-Su School Board; the animal control board; and the Parks, Recreation and Trails Advisory Board, which took public testimony at three meetings and will hold another later this month.

Mayfield said he expects the legislation to change as it moves through the process.

"The idea here is to get it in front of the Assembly and to get the people of the Mat-Su to provide us with testimony … and make good, sound decisions on what we have to do, taken in light of the fact that we've got an immense amount of growth happening in our area," he said.

Alaska Safe Trails founder Lynn Mitchell said in an email that the group is "withholding support" for the proposed ordinance because it was "gutted under pressure from the trapping community."

The ordinance at this point only serves to sanction trapping with setbacks rather than an outright ban at Crevasse Moraine, Mitchell said.

Potential exemptions for underwater sets or tree sets for marten further erode the intent of the ordinance and make for confusing, hard-to-enforce provisions, critics say.

Bill Mohrwinkel, a Knik River resident who works as a wilderness guide in summer and concert promoter in winter, signed the petition and now is working with Mitchell.

Mohrwinkel said his 30-pound husky mix got caught in a leg-hold trap in December at a popular walking area near the river but he managed to free her without injury. He's equally concerned about an old trap he found behind Swanson Elementary School just 2 feet off a well-used Matanuska River trail.

It's "disingenuous for trappers to use leash laws as an excuse" when several Assembly members have agreed most people don't keep their dogs on leash at all times, especially in parks and on trails, Mohrwinkel wrote in an email to Mayfield, Beck and Lazy Mountain Assembly member Jim Sykes.

"This borough has grown considerably since I moved here 24 years ago and continues to grow," he wrote. "We have a problem now with dogs getting trapped. It's going to get worse and it's time to be proactive. It's time for the trapping community to share."

Trappers say they're able to police themselves.

The Alaska Department of Fish and Game posts signs at trailheads warning trappers to abide by the Code of Ethics found on the back of Alaska's trapping regulations. Among other things, the code recommends trappers "(p)romote trapping methods that will reduce the possibility of catching nontarget animals" and get landowner permission before trapping on private property.

When the Mat-Su ordinance first surfaced, the Alaska Trappers Association met with Mayfield to push voluntary measures — like avoiding popular trails — that "worked so well in Fairbanks, before we enshrine something in borough ordinance," said Pete Buist, a hunting guide and former state Game Board member who represents the statewide association.

Buist agrees that most trappers don't make sets close to busy trails, so it's the less ethical ones who can ruin it for everyone else.

Trappers don't want to catch dogs, he said: It's bad for the trap, bad for the dog and bad publicity overall.

"Smart trappers don't set traps where they're going to catch a dog," he said. "Then again, if somebody's just letting a dog run it's really difficult to make sure those two things don't come together."

Asked about the 100-foot setback at Crevasse Moraine, Buist shared an anecdote. A friend was skiing with his dog off-leash in Fairbanks. He got back to his car at dark but the dog wasn't with him. It had been caught in a trap more than 100 feet off the trail and the skier struggled to find the animal, Buist said.

"The dog ended up dying because it was set back," he said. "If it had been closer to the trail, then he might have been able to find it."

There's no comparison between Fairbanks and Mat-Su, according to Todd Estey, who moved to the Valley from the northern community nearly six years ago.

"She never had one issue," he said Friday.

Then the Esteys bought 26 acres on the Knik River and moved down with 12 dogs, mostly Alaska huskies.

Since then, six dogs have been caught in six traps including one last month. All survived, though one nearly died and cost thousands in vet bills. Estey wonders if traps had anything to do with two other dogs that disappeared completely.

Two of the traps were on the Esteys' own property. Two more were illegally set on private property next door. Two sat near trails.

"I just can't believe what the trappers are getting away with out here," he said, blaming a few unethical trappers making the whole community look bad. "They roll in with their $50,000 pickups and their $30,000 side-by-sides and I can see their tracks in the snow. You can see where they just literally put one foot down and set their trap. It really is about laziness in my view."

Trappers say pet owners who keep their dogs restrained don't have to worry about traps — ethically set or otherwise.

Dog owners in the Mat-Su are required to keep dogs on leash at all times on borough land unless the dogs are participating in an organized activity like dog sledding or hunting dog trials. Owners are allowed to keep animals under voice control, but only on their own property.

The law can be hard to enforce along the Valley's increasingly popular trails.
Matt Hardwig, the borough's chief animal control officer, said his "hand would fall off" if he wrote tickets for off-leash dogs at Crevasse Moraine.

Animal control has four officers to patrol a borough the size of Ireland. They don't have the time — or the desire — to patrol trails for loose pooches, Hardwig said.

"We're trying to enforce the intent of the law, not the letter," he said.

Hardwig said he's received no reports of leashed dogs caught in traps. He knows of only one incident where the owner was near the dog, and that was at least 40 yards away.

Loose dogs accounted for 180 aggressive dog cases in 2016, according to animal control statistics. The department fielded nearly 1,000 reports involving some degree of "danger of life and safety," Hardwig said.

Asked what the borough does to enforce leash laws on popular trails like Crevasse Moraine, he said the department mostly assumes people police themselves.

The Crevasse Moraine trails have become "an unofficial dog park area" where Hardwig said traps haven't historically been a problem.

"But I think people want to make it a safe haven for their animals," he said.