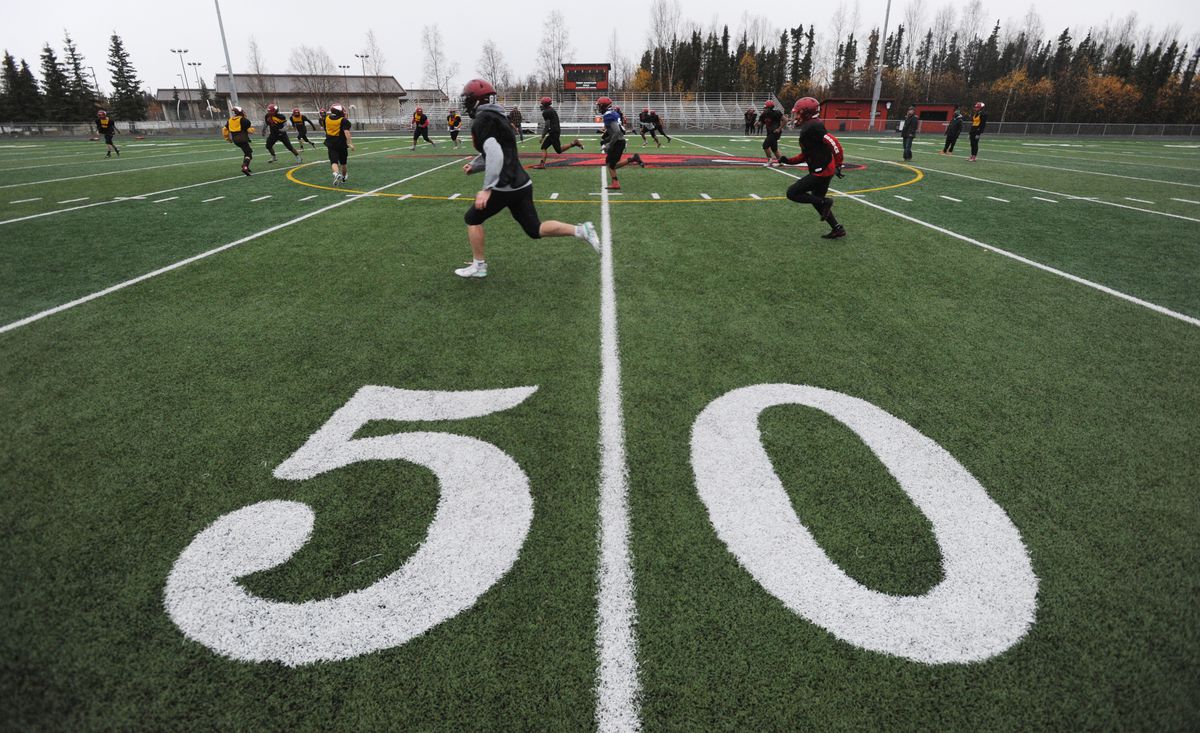 The undefeated Houston Hawks practice in the rain on Wednesday in preparation for their small schools playoff game against the Eielson Ravens on Friday night. (Bill Roth / ADN)

The undefeated Houston Hawks practice in the rain on Wednesday in preparation for their small schools playoff game against the Eielson Ravens on Friday night. (Bill Roth / ADN)

The 34-member Houston Hawks squad last weekend wrapped up the team’s first undefeated season since the sport debuted at the high school in 1997. The Hawks on Friday night face defending Division III champs Eielson at home.

Given the team’s unprecedented October, January must have been great.

That was the month Houston students finally returned to school after a powerful earthquake damaged Houston Middle School to the point it wasn’t safe to occupy and sent hundreds of displaced students to the suddenly crammed high school.

Every inch of space is precious at what’s now called Houston Junior Senior High School. Fifteen portable classrooms surround the building. Cheerleaders practiced Wednesday on a padded blue carpet in the lobby. All athletic gear is stored in one cramped room.

The team had to vacate the space where they watched game films and ate team dinners. They rotated through three rooms before ending up in an English class with a sometimes balky Promethean projector board to watch footage of upcoming competitors. Staffing shake-ups led to a series of different athletic directors at the school.

The adversity of the months following the quake made the team stronger, Nelson said.

“Take away our classroom, gear room, switch ADs — that’s all fine," he said. “We’re just gonna do what we do.”

The team is looking ahead to the playoffs and a possible state championship berth.

But this historic season is already remarkable for a small team set in a community of roughly 2,000 scattered in subdivisions and side roads along the Parks Highway, a place without a real town center that some outsiders may know more for Southcentral Alaska’s only legal fireworks stands than a winning athletic program.

Nelson, who had coached for established football programs at Colony and Wasilla, started in Houston in 2013. Like the rest of the coaching staff, he doesn’t actually teach at the school. He finishes his U.S. history classes at Wasilla and drives up for practice.

The school fielded its first football team in 1997 but didn’t actually win a game until the next year: the so-called "bear game” against Glennallen that featured a persistent grizzly that needed shooing off the field.

It wasn’t that many years ago that Houston Hawks games drew maybe a half-dozen fans to a grass field. Every touchdown was cause for celebration.

Houston’s stats this season show the team’s progress. The defense has allowed only 42 points, the best in the state at any level, according to The Mat-Su Valley Frontiersman. The 316 points scored by the Hawks so far this season leads all Division III programs.

The team includes a female kicker — Denali Whitted, who also plays soccer and volleyball — who probably became the first girl to kick a field goal above the Arctic Circle during Houston’s 31-6 win against Barrow in late August. The others gave her a nickname after that kick: “Legacy.”

The team created a spirit award to honor the memory of Jackson Loveless, the team’s manager born with a brain mass that caused a series of health issues. Loveless suited up and walked in a touchdown against Eielson in 2016 before his death the next year.

The team relies on community support that they try to return in kind, backers say. The principal of nearby Big Lake Elementary helps take tickets at the gate. A former coach still helps train snappers.

The Hawks booster club has raised about $12,000 this year in sponsorships mostly from companies within the Houston, Big Lake or Wasilla area, according to club president Jim Mulhaney. Fireworks stand owner and local businessman Robert Hall puts on a pyrotechnical display.

A half-dozen Hawks stacked wood for a local resident last Saturday, the day after the team extended its undefeated status with a home victory over Redington. The players decided to donate the $600 they earned to the booster club instead of pocketing the money.

“Everything’s clicking with the coaches and the booster club and the players,” he said. “There’s really really good chemistry.”

Meanwhile, the high school will remain cramped through next season. The Mat-Su School Board earlier this month passed a resolution to retrofit the middle school as a high school, which will in turn house middle school students, district spokeswoman Jillian Morrissey said. The project is predicted to be finished in time for the start of school in 2021.

The team on Wednesday watched replays of Eielson at Barrow last weekend before the players suited up for practice ahead of Friday night’s big playoff game. Nelson and his assistant coaches tolerated a certain level of jokes and rowdy behavior. Most players answered “yes coach” or “yessir” to questions.

The projector hiccuped and the images stopped.

“You guys remember the good old days when we used to have an actual film room?" Nelson said.

Problem solved, the team wrapped up the viewing session, unfolded themselves from the chairs in the English classroom, and left to suit up for practice.

The significance of the season and what lies ahead doesn’t seem to weigh on the Hawks, their coach said. “They just don’t seem affected by it.”