Because of earthquake damage, Houston Middle School won’t open this year — or probably next 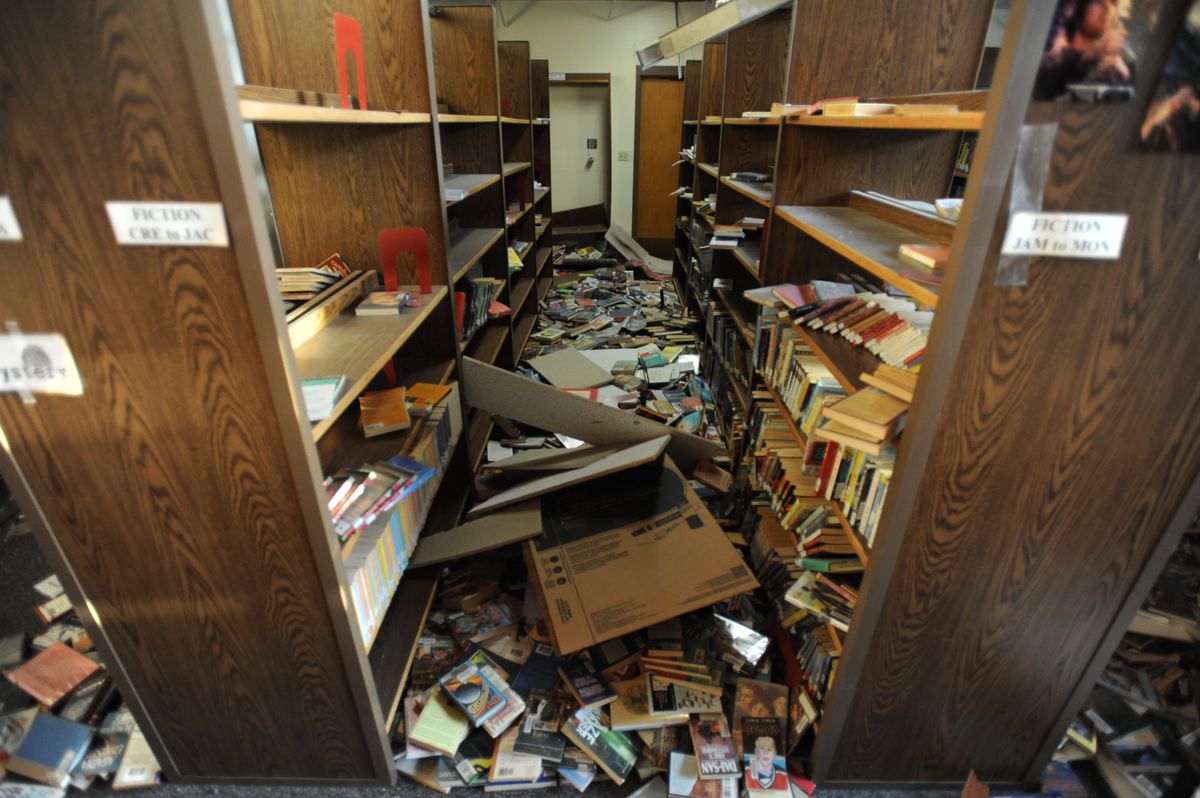 Books were shaken off the shelves in the library at the earthquake damaged Houston Middle School on Monday, Dec. 3. 2018. (Bill Roth / ADN)

Books were shaken off the shelves in the library at the earthquake damaged Houston Middle School on Monday, Dec. 3. 2018. (Bill Roth / ADN)

PALMER -- Some Mat-Su schools now won’t open to students until Tuesday, others have undetermined opening dates and Houston Middle School is closed not only this school year but perhaps the next as well.

That’s the latest update from the school district as officials work to sort through the damage form Friday’s magnitude 7.0 earthquake.

Many schools reopen this week, 33 of them by Wednesday when a handful already open are joined by a few dozen more that open to staff and teachers before opening to students Thursday.

The middle school with nearly 400 students in the small Parks Highway city north of Big Lake will “probably not” reopen next year either, Fulp said. It’s not clear whether the school will be rebuilt or need to be demolished.

The district plans to create a junior-senior school based at Houston High School, he said.

The Mat-Su Assembly on Tuesday moved more than $11 million out of several reserve accounts so the money can start flowing toward repairs on schools and roads. Borough Manager John Moosey said he expects the total cost to be far higher.

[All our coverage of the 7.0 Alaska earthquake]

The borough suffered damage to several major roads including Vine Road and Point MacKenzie Road, a two-laner near the quake’s epicenter that leads to the borough’s quake-damaged port and a major prison, Goose Creek Correctional Center, that rode out the quake intact. A gas liquefaction plant about a half-mile from the epicenter also survived the quake, borough officials say.

But it’s also likely hundreds of other roads suffered as well as buildings and fire stations.

Hazard reduction work started on Vine Road on Monday evening and is expected to finish Wednesday, according to borough public information officer Erin Leaders. Then the borough will solicit bids.

A temporary repair including a gravel road across the damaged section of Vine is expected to cost about $194,000, public works director Terry Dolan said.

It’s not yet clear how extensive damage was to commercial and private buildings. Borough emergency managers are urging the public to report damage at one website: report-ak-matsu.orioncentral.com.

The Big Lake Library and Palmer pool, both closed following the quake, are expected to reopen Wednesday, Moosey said after the meeting.

The assembly failed to pass a waiver of fees at borough landfills through Sunday so residents can safely get rid of quake-related debris. The Anchorage Regional Landfill already waived fees and is allowing free dumping through Saturday.

Four members voted for the waiver — George McKee and Jesse Sumner voted no — but six votes were needed.

“We’re facing some extremely expensive bills here and I don’t think we need to be doing that,” Sumner said after the vote. “I don’t think we’ve failed by not offering a service for free. ... Everything costs money.”

A local disaster emergency issued Friday will now remain in effect until mid-January,