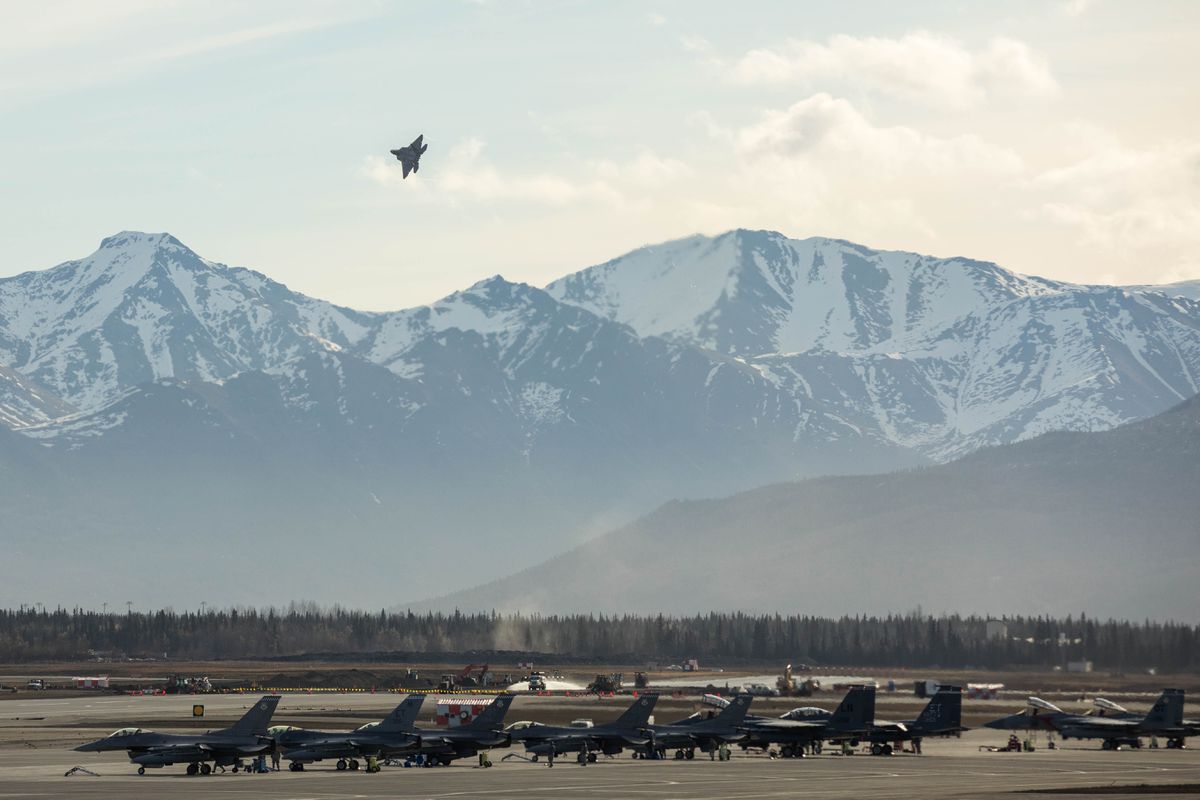 An Air Force F-22 takes off from its home base at Joint Base Elmendorf-Richardson on May 2, 2017 during the Northern Edge training exercise. On the tarmac are F-16s and F-15s. (Loren Holmes / ADN archive)

An Air Force F-22 takes off from its home base at Joint Base Elmendorf-Richardson on May 2, 2017 during the Northern Edge training exercise. On the tarmac are F-16s and F-15s. (Loren Holmes / ADN archive)

The Air Force said Friday that it plans to build a $150 million runway extension at Joint Base Elmendorf-Richardson that officials say will reshape air traffic over Anchorage while easing jet noise problems in the Mountain View neighborhood.

The plan, which recently got approval from the Pentagon, calls for extending JBER's north-south runway 2,500 feet to the north. It means the north end of the runway would become the main arrival point for aircraft, according to an environmental analysis. Right now, the main arrival runway for JBER aircraft is the base's east-west runway, with an approach that passes through the crowded Anchorage airspace.

Extending the north-south runway was one of several options that Air Force officials had explored in recent years to reduce airspace congestion and give pilots more training time.

"The most important takeaway for the Anchorage area is that this plan will relieve air traffic congestion over the city, which is some of the busiest airspace in the world," Col. Robert Davis, commander of JBER's 3rd Wing, said in a statement Friday. "If we can contribute to air traffic safety in our shared aviation community between JBER, Ted Stevens, Lake Hood and Merrill airfields, I'm all for it."

On top of a hefty price tag, the runway extension will involve moving huge amounts of earth and disturbing about 28 acres of wetlands, according to the environmental analysis.

But a less-expensive option that did not involve construction would have led to more noise over the Mountain View neighborhood, disproportionately affecting more than 400 minority and low-income residents, the environmental analysis said.

Keisha K. Lafayette, an Air Force public affairs specialist, said officials would work with the Army Corps of Engineers and the Environmental Protection Agency to mitigate the loss of wetlands.

In the statement, Davis, the wing commander, said the project would quickly pay for itself by saving the military up to $28 million each year in fuel expenses. Military planes will be taking more direct routes to and from range areas, according to Davis.

Davis also predicted the project would inject about $150 million into the local economy from construction contracts alone. He and other JBER officials weren't immediately available for further comment Friday.

A construction start date hadn't yet been set, because of budgeting within the Department of Defense, the statement said. But officials said in the statement that the runway was expected to be up and running by 2025.

[For some in Anchorage, it's been the summer of airplane noise. But just wait until next year]

The Federal Aviation Administration is conducting an airspace study to take in concerns from the local aviation community, officials said in the Friday statement.

At a September 2017 meeting with Air Force officials, Mountain View residents urged the Air Force to pursue a runway extension. Other proposals would have led to increased noise over Mountain View from the early moments of jets taking off north on the existing runway, away from the neighborhood.

Residents and community leaders complained the noise had disrupted classroom teaching for years and caused anxiety among those with noise sensitivity. They worried also more noise would hamper the neighborhood's economic revitalization efforts.

State Rep. Geran Tarr, D-Anchorage, who attended the meeting, said Friday that she appreciated the Air Force had listened to community concerns. She said the runway extension also made sense strategically for JBER as the base expands in future years.