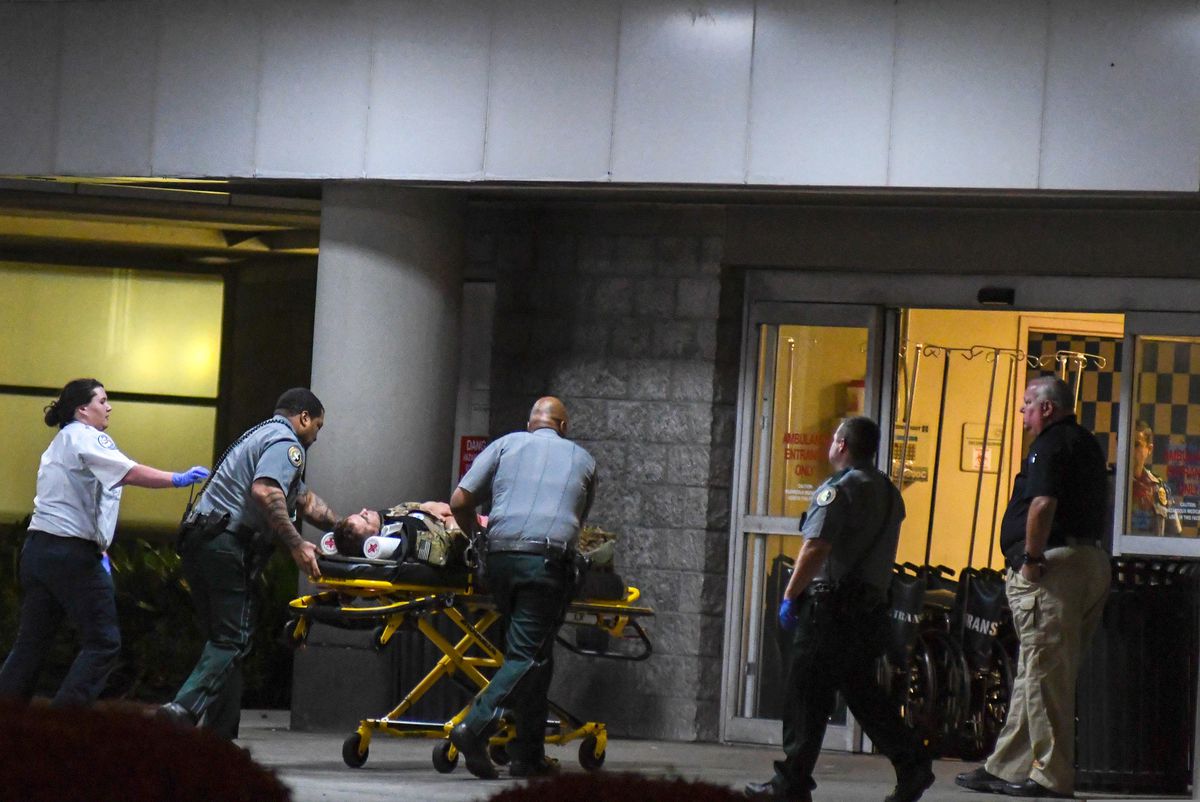 Editor’s note: This story has been updated. Find the most recent information here.

At least 20 Alaska-based Army paratroopers were injured, many seriously enough to go the hospital, during a night training exercise in Mississippi late Wednesday.

The paratroopers were all from the 4th Brigade Combat Team (Airborne), 25th Infantry Division, at Joint Base Elmendorf-Richardson. They were participating in an exercise at Camp Shelby south of Hattiesburg.

Eighty-seven soldiers landed in trees during a jump Wednesday night, according to the battalion commander. Some ended up so high up they needed “significant recovery support,” Lt. Col. Matt Myer, commander of the 1st Battalion, 501st Parachute Infantry Regiment said in an update to families.

Eighteen of them required medical care including one who needed surgery for a broken back, military and hospital authorities said. None of the injuries were life threatening. Several were also treated in the field.

Hospital officials in the area said Army officers advised them several weeks ago that the “risky” training procedure could lead to an influx of patients.

A Camp Shelby commander told a local television station the injuries occurred when wind blew the paratroopers away from their intended drop zone into a stand of pines after they parachuted from a C-130 during the exercise around 8:30 p.m. Wednesday.

A U.S. Army Alaska spokesman said he couldn’t comment on what happened during the jump. The incident is under investigation.

More than 20 paratroopers injured during training

BREAKING: More than 20 paratroopers were injured when they landed outside their target zone in trees during training at Camp Shelby in Mississippi. Forrest General Hospital holds a press conference regarding injuries at Camp Shelby.Details: http://bit.ly/3345cYr

All the soldiers came in conscious with injuries ranging up to significant fractures, according to the hospital’s trauma medical director, Dr. Duncan Donald, who spoke to the media Thursday morning.

At least one required transport by military helicopter. Two required emergency surgery overnight and were stable and doing well Thursday morning, Donald said. They should be able to return to active duty within three months.

Patients trickled in, he said, because of the time it took to extract some of them from the trees in which they were caught.

The hospital went into mass casualty mode after they were told to expect as many as 84 injured soldiers, officials there said.

A Mississippi National Guard statement said, “Forrest General Hospital was notified prior to the jump of the potential influx of patients and the types of injuries to be expected and emergency vehicles were on standby at Camp Shelby prior to the jump.”

Forward officers met with hospital officials several weeks ago to let them know more patients could be coming in than usual during the training because of the “significant number” of soldiers involved, Nelson said.

The hospital got another notification about four hours before the incident that the unit was “doing a somewhat risky procedure and they may bring us more patients than usual,” he said. “We were prepared and ready to go.”

The hospital had more than 200 staffers on duty Wednesday night including trauma, spine and neurosurgeons, as well as extra radiologists, anesthesiologists and a plastic surgeon.

About 650 paratroopers were jumping at the start of the 10-day exercise, the Army said. About 3,000 JBER-based soldiers were in Mississippi for the exercise, U.S. Army Alaska spokesman John Pennell said.

The Mississippi National Guard statement said once all of the paratroopers had been accounted for, the training would continue because “soldiers always place the mission first.”

Myer, the commander of the Alaskan regiment nicknamed “Geronimo”, praised the community around Camp Shelby as going “above and beyond” to care for the paratroopers. He specifically thanked the hospital doctors, the camp’s range control and assault strip fire department and the Mississippi Task Force Urban Search and Rescue.

“As I have said before, service as a paratrooper requires a level of toughness that most do not understand,” Myer wrote. “Despite the difficulty of this training jump, the battalion performed well and will recover well to continue our training mission.”

The unit will continue recovering equipment “over the next day” before continuing training, he said.