As the world warms, costs rise for Alaska military bases 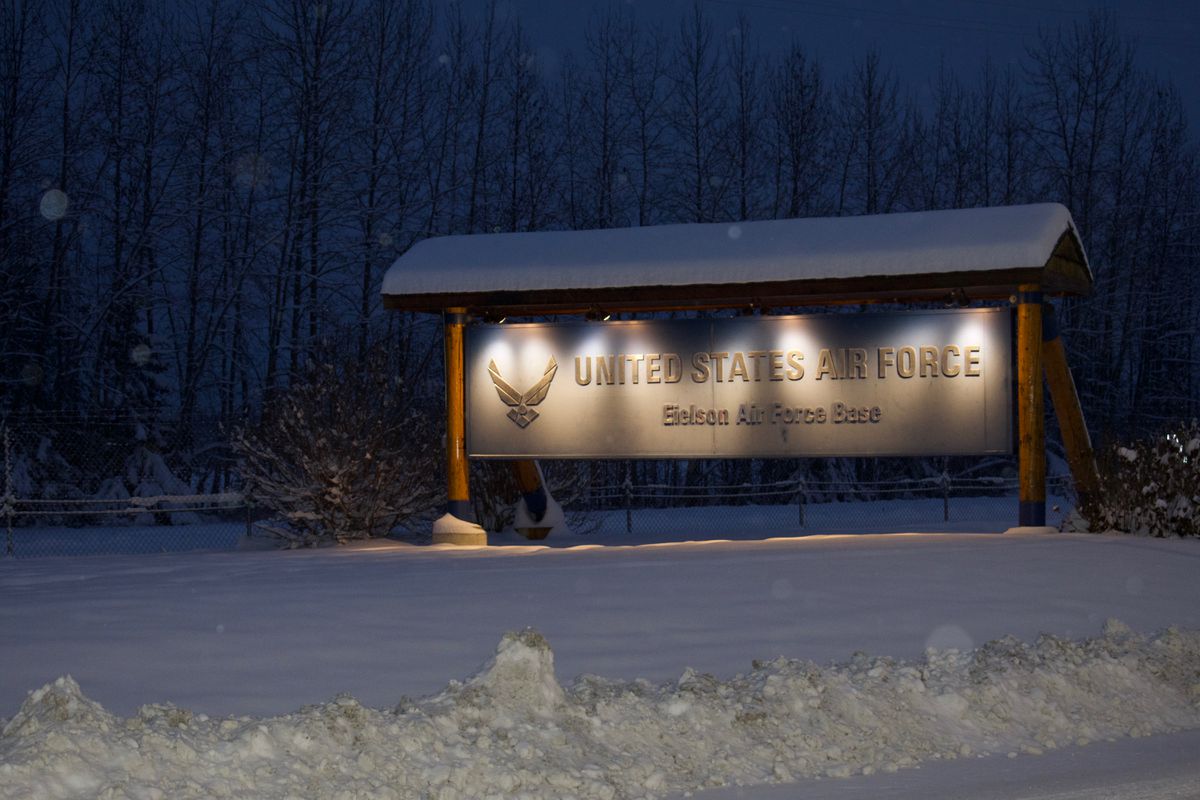 Entrance of Eielson Air Force Base. (Photo by Sara Karlovitch)

Entrance of Eielson Air Force Base. (Photo by Sara Karlovitch)

EIELSON AIR FORCE BASE — When warming temperatures melted the frozen ground under the munitions repair facility here years ago, the foundation shifted, causing deep cracks to spread across the thick concrete walls.

Over time, the repair bay for missiles and other explosives began to separate from the floor, forcing the 12-foot blast-proof doors out of alignment so they could not be properly closed, according to Defense Department documents and interviews with base construction officials.

Then the entire facility, built on a sloping hillside and hidden in a patch of dense trees, started slowly sliding towards the base of 10,000 people working and living below.

In Alaska, it is not only wildlife and Indigenous communities that are deeply affected by warming temperatures, but also Cold War-era U.S. military bases. Once facing closure, some of these bases, like Eielson, have become strategically important again for their proximity to Russia, China and North Korea and the vast Arctic resources that global warming has made accessible to competing nations for the first time.

“Alaska is the most strategic place in the world,” U.S. Sen. Dan Sullivan, an Alaska Republican, said this spring in a statement announcing the arrival of the first two F-35 fighter jets among the two squadrons of planes to be based here.

The detrimental effect of global warming is pushing up the cost of ongoing operations at three of Alaska’s four major U.S. military bases: Eielson, Fort Wainwright and Clear Air Force Base. All are located in a warming swath of Alaska where patchwork or “discontinuous” permafrost exists and is prone to melting.

Military planners have requested more than $1 billion over five years to fund construction needed to keep the three bases operational and to support the employees and families who work and live on them, according to a Howard Center for Investigative Journalism analysis of military service construction requests submitted to Congress from fiscal year 2015-2020. While only a portion of that spending was for climate-related work, that portion is expected to grow.

“You can at least postpone for several decades the severe consequences” of global warming, said Vladimir Romanovsky, a geophysics professor and permafrost expert at the University of Alaska Fairbanks. “It will just require more work and more money.”

Eielson was on the verge of closing when the Air Force decided in 2016 to station two squadrons of its fifth-generation stealth fighter jets there, revitalizing the base and surrounding communities just as the damaging effects of global warming were becoming clearly visible.

Over the years, as engineers watched the munitions repair facility, Building 6385, shift with the melting ground, they would patch the cracks and make other repairs in the hopes of saving it, said Jason Stormont, the project manager for the facility. “They filled it in over the years to try and preserve it,” he said in an interview, surrounded by four security escorts accompanying a visitor to the outside of the classified facility.

But new soil samples showed the permafrost to be deep and unstable.

“It wasn’t feasible to restore it so we’re going to (demolish) the entire building to the ground,” said Stormont. The cost to rebuild is $15.5 million, according to Air Force military construction budget documents.

The new building will require steel pilings that reach 100 feet deep to keep it from becoming unstable and unsafe once again, said Mark Hoague, the F-35 Facilities Program Planner at Eielson.

Due to the explosive content inside, the facility cannot be built anywhere else on base except the isolated hill of discontinuous permafrost where it now sits, he said.

Despite the decision to replace the munitions facility at Eielson, the defense department has no engineering standards that take into account the long-term impact global warming on military bases in Alaska, according to a May 2019 Defense Department “Report to Congress on Military Structures in Permafrost Areas” requested by the Republican-led Senate Armed Services committee.

“Unfortunately, there are no vetted design standards to provide engineers a method of calculating thaw depth or ice strength in the very long term,” the report said. “Developing an industry standard practice to estimate this project temperature increase is of high importance to resilient Arctic and sub-arctic construction.”

The Senate committee insisted that failure by the Defense Department to understand the impact of climate change on military installations built on permafrost “can over time put DOD military readiness, mission capability, military construction, and valuable taxpayer resources at risk.”

In the last three years, new construction and repairs to existing buildings on or around the permafrost under Eielson’s 63,000-acre base cost $164 million, according to Air Force budget documents. Much of the new construction is associated with the arrival of two squadrons of F-35s.

On Eielson, at least $5 million has been spent to dig out and replace permafrost with substitute material or to install cooling systems to keep the permafrost from melting, the report said. This included the ground underneath new concrete and earth-covered magazines that can store up to 500,000 pounds of explosives.

“I think that it’s important to recognize that the (global warming) issues are going to be unique to every single base,” said John Conger, former assistant secretary of defense for energy, installations and environment and now director of the Center for Climate and Security, a Washington-based institute that advocates policies to reduce the national security threat from climate change.

Military leaders have long recognized global warming as a threat to operations and to international stability. Under President Donald Trump, who disputes the overwhelming scientific evidence that global warming exists, the Pentagon has sought a low profile on the issue. For example, it has largely stopped using terms such as “climate change” and “global warming” or giving press briefings on the matter so as not to antagonize the White House, according to current and former military officials.

Nearly 85% of Alaska sits on permafrost, which is defined as ice, rock or soil that stays below freezing for at least two consecutive years. In far northern Alaska and the Arctic, the permafrost is more stable than in the warmer central region, which is characterized by patches of permafrost that have been melting and becoming more unstable.

Researchers from the U.S. Army Corp of Engineers who have studied permafrost say there are only three ways to deal with it: heat it to melt it then build on top of it, keep it frozen with underground coolers, or excavate it and replace it with a more stable material that won’t melt.

Alaska is warming twice as quickly as any other U.S. state and twice as fast as the global average, according to the Fourth National Climate Assessment. About a meter of permafrost melts in Alaska every decade, said Romanovsky, the permafrost expert.

A Cold War-era early warning radar site for incoming land- and submarine-launched intercontinental ballistic missiles, melting permafrost on Clear has been responsible for an increase in wildfires, according to a January 2019 Defense Department study titled “Report on the Effects of Climate Change to the Department of Defense.”

When permafrost melts, the result is more water in the soil than normal. When the water evaporates, it turns into clouds, which produce more rain and more lightning, said Thomas A. Douglas, the senior scientist at the U.S. Army Cold Regions Research and Engineering Laboratory.

Lightning, in turn, sets off more wildfires. “If you kind of look on Google Earth and you zoom out, you’ll see (Clear Air Force Station) surrounded by forests,” Douglas said. “So pretty quickly … you’re on the edge of what can burn right to your doorstep.

“Wildfire is a whole other piece … of the permafrost puzzle,” said Douglas.

Heat can also be a more direct accelerant for fire. In 2013, Alaska’s unusually hot summer resulted in fires that burned more than 1 million acres. In 2019, which was even hotter, fires burned over 2.5 million acres, according to state fire officials.

The fires, in turn, burn away the organic matter and vegetation that help keep the permafrost frozen, prompting even more melting, said Douglas. The smoke from fires also releases more carbon into the air, increasing global warming.

“We actually had areas that measured our annual air temperature above freezing last year, which is unheard of,” said Jeff Curry, north regions materials engineer at the Alaska Department of Transportation and Public Facilities Department in Fairbanks.

At Fort Wainwright, a 1.6 million-acre Army training post of 7,200 soldiers in Fairbanks, the Army Corps of Engineers has performed extensive soil and core sampling to map the discontinuous permafrost on much of the base so they can avoid building on top of it.

Base officials said they were unable to provide details of the additional cost required to avoid building on permafrost. But according to the 2019 Defense Department permafrost report, the cost associated with constructing just a building’s foundation in Alaska is more than twice as high as on bases outside Alaska with no permafrost.

“We’ve isolated and identified a lot of these (permafrost) areas, and what we try to do is avoid them if at all possible,” said John Wentz, project manager at the Department of Public Works on Wainwright. “It’s very expensive to have to deal with it.”

‘Not a proud moment'

Along the quiet road leading from the main Eielson base to the munitions repair facility, a large dip in the pavement is another tell-tale sign of melting permafrost’s ongoing degradation to road infrastructure.

The structural damage to the sand-colored facility where thousands of pounds of missiles and other explosive munitions were once disassembled, tested and repaired for the bases’ F-22 jet fighter squadrons took years.

“It happens over a long period of time,” said Hoague, “like 20 years, 30 years to get a couple three inches but it can break pipes and do all sorts of damage.”

The munitions facility was built to last 50 years but is being demolished after a little more than 20 years, he said. “Not a real proud moment for whoever did the design.”

The Howard Center for Investigative Journalism is part of the Philip Merrill College of Journalism at the University of Maryland. It is funded by the Scripps Howard Foundation. Karlovitch reported from Eielson. Grace Todd also contributed to this report.