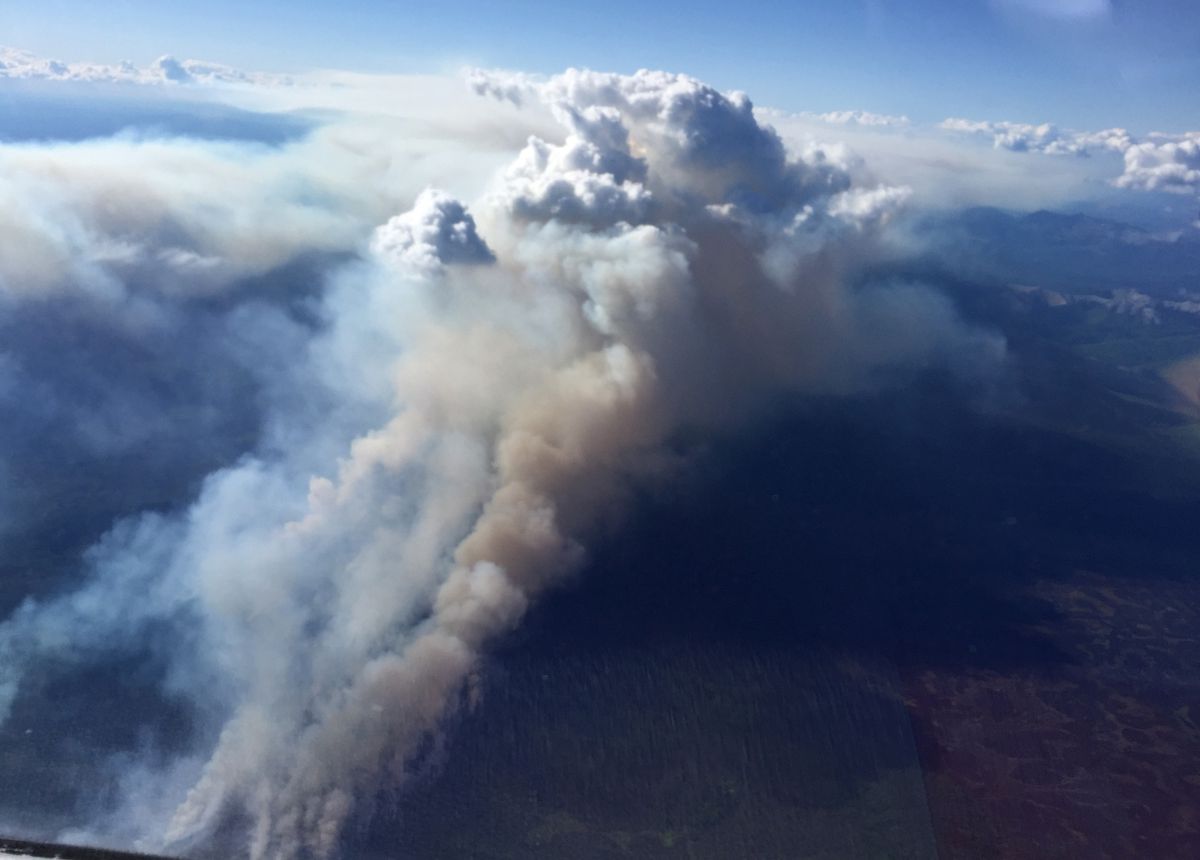 The smoke plume from the Medfra fire as seen on Monday. (Robert McCormick/Alaska Fire Service)

The smoke plume from the Medfra fire as seen on Monday. (Robert McCormick/Alaska Fire Service)

Last year was the second-largest fire season on record in Alaska and 2015 "is still smoking," officials said. One holdover on Sunday sparked the 8,130-acre Medfra fire now burning in remote Southwest Alaska.

Already 16 holdovers have been spotted, most of them on the Kenai Peninsula or Kodiak Island. Holdover fires are ones that firefighters thought were out, but come back to life as conditions dry out and temperatures rise.

"Most of them start out as just little hot spots," said Tim Mowry, the state Division of Forestry public information officer. "The term fire is sort of a misnomer. They are not really fires. They are usually a little bit of smoke coming out of a burned area."

The count of 16 that have signaled their presence as of Wednesday appears to be extraordinarily high. Some years there are none; some years just a few. There aren't records on holdovers, though. Mowry said officials may start tracking them year to year.

It also could be the holdovers are more exposed than usual this year, a state fire behavior expert said.

Fire officials warn people to be cautious in burned areas and to call in any smoke rising up from the blackened ground.

"It is definitely a safety hazard," Mowry said.

Alaska is prone to wildfires, and the threat may be worsening. Three of the top five fire seasons on record for Alaska have happened in the last 12 years. Fires are burning hotter and the fire season is starting earlier and lasting longer.

Holdovers also are common here, just not so many as this year, because of the deep duff layer of composting moss, twigs, leaves and spruce needles that blankets the forest floor or the rotting organic underlayer of the tundra.

"It's the nature of Alaska and the thick layer of duff that we are talking about," Mowry said. "It shows you Alaska wants to burn."

Once a fire is established, it is very hard to completely douse, said Robert Ziel, the forestry division's fire behavior analyst.

Fires burrow down and the duff above them absorbs the moisture.

"It's almost like an umbrella over that fire that keeps it insulated and dry," Mowry said.

Last summer, more than 5.1 million acres burned, the second largest expanse on record, according to the state. That big fire year combined with low snow last winter and a warm dry spring all may have combined to allow more holdovers.

Fire managers send in crews to try and put down holdovers at the perimeter of an already burned area but aren't as worried about those surrounded by charred land.

"Anything that has the capability to reach out and grab unburned fuel is a concern," Mowry said.

In Southwest Alaska, officials are attributing the big Medfra fire that started Sunday 50 miles northwest of McGrath to a holdover. It was called in as a smoke report in an old burn area, then quickly spread to fresh fuel. A helicopter from McGrath arrived to dump buckets of water on it within an hour, but by then it had spread over an acre. Smokejumpers stationed in McGrath attacked but it kept growing.

Tuesday night, the Medfra fire merged with the smaller Berry Creek fire, combining for an estimated 8,130 acres burned or burning. The two are among three Southwest Alaska holdovers from the Soda Creek fire that burned about 16,500 acres last summer in the same area near the Kuskokwim River.

About 80 firefighters in four crews were working to protect Native allotments and two cabins on Wednesday. White Mountain's initial attack crew and crews from Lower Kalskag, Upper Kalskag and Nondalton were on the scene.

On the Kenai Peninsula, all but one of the holdovers were found in the burn area of the Card Street fire that scorched almost 8,900 acres last year near Soldotna. The exception was a holdover from the Funny River fire, which burned almost 200,000 acres – two years ago.

There is also a holdover in the Mat-Su from last year's Sockeye fire.

Here are the five biggest Alaska wildfire seasons on record: