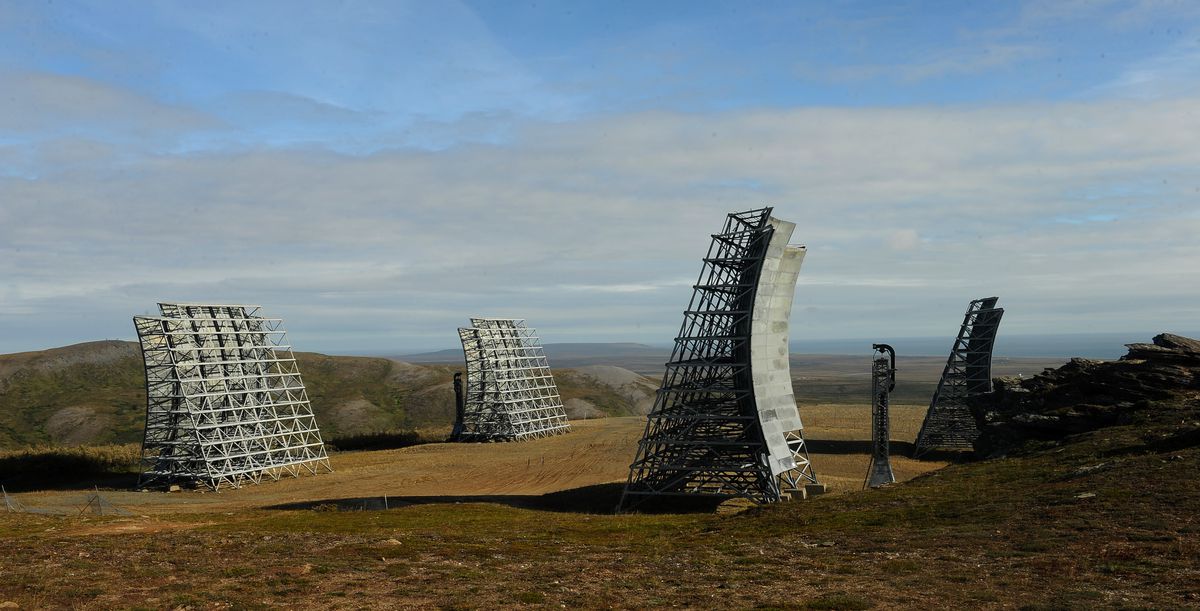 NOME — An otherworldly cluster of communications antennae, built decades ago to warn the nation of a missile attack by the Soviet Union, is set to become the permanent centerpiece of a recreation and tourist area overlooking this Northwest Alaska city.

The White Alice communications site on the curving crest of Anvil Mountain has not operated since 1979, and like the 30 other White Alice stations in Alaska with large billboard antennae, it was contaminated with asbestos, lead, polychlorinated biphenyl and spilled fuel.

Yet the city's fondness for the massive antennae and the history they represent endures. They symbolize connection to the rest of the country, and the outside world in general. They're a reminder — in case anyone needs reminding — that Nome is less than 150 miles from Russia, a major U.S. antagonist. And they provide reassurance that Nome, a town of 3,800 people on a remote shore of the Bering Sea, matters.

They're still useful, too. The assemblage of four antennae, which resembles a Stonehenge built by Martians, serves as a navigational aid for pilots, hunters, crabbers and many others in a region with few obvious landmarks. Built for a communications technology called "tropospheric scatter" that was soon surpassed by satellite, the antennae are among the last of their kind in Alaska.

Former Nome mayor John Handeland has been campaigning since the mid-1980s for the U.S. Air Force to preserve the nearly 60-year-old antennae.

"I probably would have chained myself to a tower had the Air Force come to take them down," said Handeland, who now manages Nome Joint Utilities.

Since the mid-1980s, the Air Force and Army Corps of Engineers have been dismantling and cleaning up many of the 71 White Alice sites throughout the state. More than 8 million pounds of contaminated soil was shipped from the Anvil Mountain White Alice site to Arlington, Oregon, in 2010-2011. Gone are the maintenance buildings and two 70,000-gallon fuel tanks.

Only the antennae are left.

The city's mission to take the site over is not quite complete. The land still belongs to the Air Force and Sitnasuak Native Corp. has first dibs on the 12-acre property under the Alaska Native Claims Settlement Act.

In 2012, Sitnasuak's board voted to request that the Air Force take down the antennae, according to documents presented to the City Council in March. The corporation did not want to be liable for personal injuries connected with the antennae and wanted to make room for the possibility of building new telecommunications infrastructure on the mountain.

To ensure the city can take ownership and preserve the antennae, the City Council in April voted to approve a land swap with Sitnasuak. In exchange for the White Alice site, with the antennae intact, the city will grant Sitnasuak title to parcels in Nome near the Bonanza Express gas station, which is owned by the corporation, and the Airport Pizza restaurant.

According to the travel website TripAdvisor, a visit to the White Alice site is the top-rated thing to do in Nome. Locals say they go to the mountain to gather berries, hike or gather ultra-warm musk ox fur, known as qiviut, which catches on willow shrubs as the shaggy animals pass by.

On a sunny day in August, people walked their dogs or jogged down the stony road connecting the antennae with the city. The panorama from the top includes Nome proper, Sledge Island, a wind farm and the backside of Anvil Mountain, where miners have upended large sections of tundra in search of gold.

"The White Alice site is beloved by all for sure," said Megan Alvanna Stimpfle, who was born and raised in Nome and is both chief of the King Island tribe and a commissioner for the Port of Nome. "It inspires mystery and reminds us of the past and our location in the world."

Should the land swap go through, the antennae would add historic interest and avant-garde flair to the city's envisioned recreation area, one that officials say might include barbecue grills, informational signs, picnic tables, a boardwalk, parking and — on days when the coastal wind abates — volleyball nets.

The plans are modest compared to the millions of dollars the federal government spent to erect and dismantle the site. With Alaska in a fiscal downturn, Anvil Mountain is unlikely to see a large government-sponsored project anytime soon.

"We're trying to do this on relatively inexpensive basis," Moran said. "The taxpayers would not be thrilled about throwing millions of dollars at this."

Editor's note: This story has been corrected to reflect that the structures are communications antennae, not radar towers. The distance from Nome to Russia has also been updated.