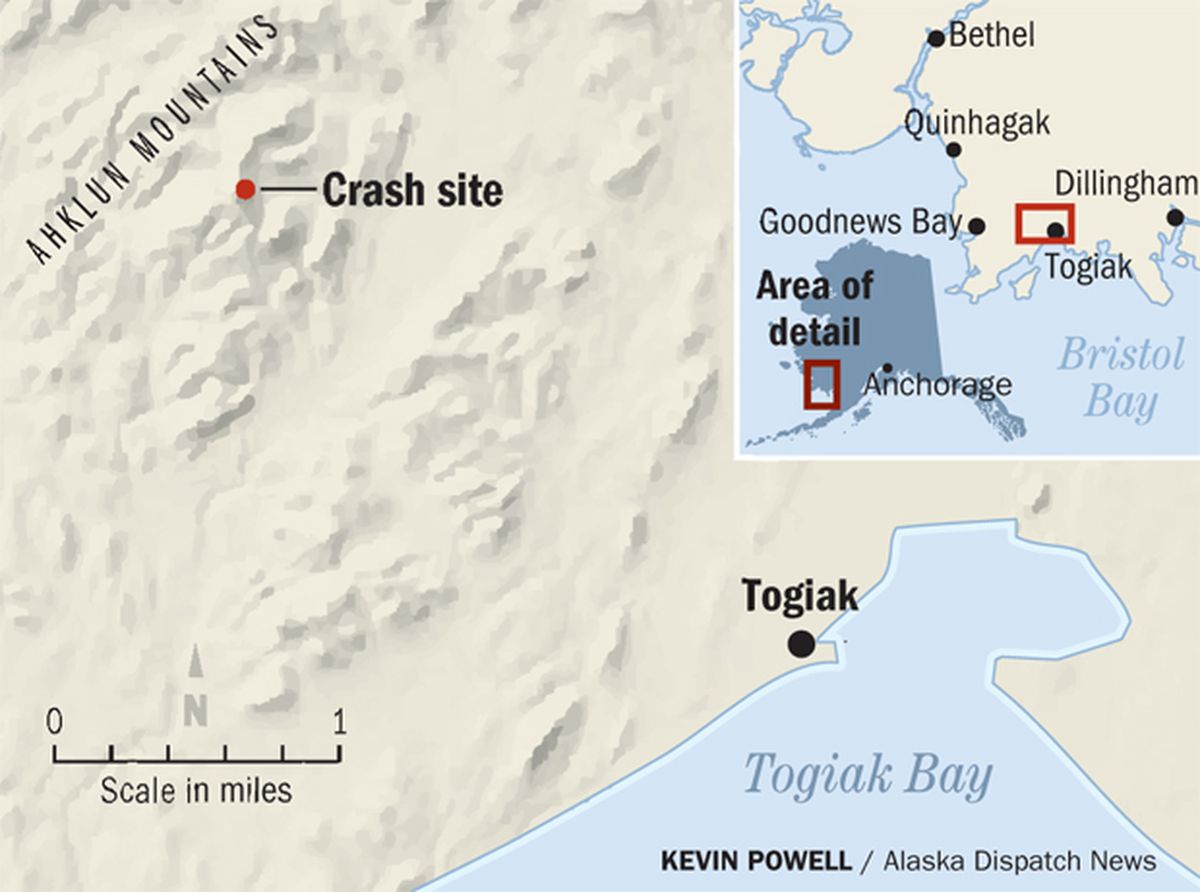 BETHEL – The Ravn Connect plane that crashed Oct. 2 was on an unusual route over the mountains between the Southwestern Alaska villages of Quinhagak and Togiak — a connection that only exists because of a U.S. Postal Service program that subsidizes the cost of air freight in rural Alaska.

It's a route that other air carriers didn't want. Yute Air, with smaller planes, considered it too risky. Grant Aviation, which flew it about a year before Ravn took over, says it didn't pay off.

Operators of stores that benefit from the postal subsidy say the routing doesn't work for them, either. Often, planes cannot fly over the mountains at all because of weather, which, in Quinhagak, means the shelves at the village store go empty.

The Postal Service designated Togiak as a hub for Quinhagak's goods in April 2014 to save money.

"That's something that the Post Office created," said Susan Hoshaw, director of cargo services for Everts Air Cargo. Once Togiak became a hub, Everts began transporting freight there twice a week direct from Anchorage in its big, Douglas DC-6s, she said. From there, Ravn picks up the goods for the rest of the journey to Quinhagak as part of the Alaska bypass mail program.

Before the federal agency acted, there was no regular commercial traffic between the two communities, according to air carriers. And there still aren't regularly scheduled passenger flights, though passengers can travel on the same small planes with the cargo.

The bypass mail isn't mail at all but rather bulk shipments – mainly groceries – going to rural villages and, as the name implies, bypassing the regular U.S. mail delivery system.

It's an expensive and controversial subsidy that dates to the 1970s, which supporters defend as the Alaska equivalent of government-funded highways. The lucrative bypass program, mandated by Congress, not only brings goods to Bush villages, it also keeps fares lower for passengers who otherwise often have no other way in or out.

So far this year, the service says it has delivered more than 83 million pounds of bypass mail across Alaska – and has lost almost $81 million doing so.

"Transporting mail to customers and post offices in remote areas of Alaska is a part of the Postal Service's universal service obligation," John Friess, a Denver-based spokesman for the agency, said in an emailed response to questions.

The route at issue is over the Ahklun Mountains, a far western range with small glaciers that are rapidly disappearing.

On Sunday, a Cessna 208B Caravan slammed into a nearly 2,500-foot peak near a GCI cell tower on what's known locally as Caribou Ridge, killing the two pilots and sole passenger on the flight from Quinhagak to Togiak.

The Ravn plane was operating under visual flight rules. When Alaska State Troopers arrived at the crash site later on Sunday, it was initially so foggy that they couldn't see the crumpled and charred fuselage.

Ravn officials have not answered questions about the purpose of the flight or the routing.

No mail was on the flight, according to the service. The plane was heading to Togiak to pick up store goods for a return trip to Quinhagak, according to Warren Jones, president of Qanirtuuq Inc., the village corporation that owns the Quinhagak store.

Stores: Not a good route for groceries

Back in 2014, the community of Quinhagak was caught unaware when the service decided to switch its freight hub, he said. Residents petitioned the service to keep it in Bethel, Jones said. Bethel still serves as the freight staging area for numerous other Yukon-Kuskokwim Delta villages.

"The move has cost us thousands of dollars because when the weather is bad, we don't get groceries," Jones said recently. "Our shelves are empty. We don't sell any of it."

Sometimes goods sit so long they run past their expiration date. Frozen chicken wings may arrive in what looks like a thawed-then-refrozen block, Jones said.

The service sent a representative to Quinhagak for a community meeting, but stuck with Togiak.

"All of a sudden we went from having three air carriers competing in hauling all the bypass mail from Bethel to Quinhagak to having one out of Togiak," said Dan Knesek, Yute Air's operations director.

After the community meeting, the service looked into the delivery concerns and made recommendations about product-ordering cycles, Friess said.

The Alaska Commercial Co., which runs the Togiak store, says the arrangement doesn't benefit its operation either.

Before, planes flew first to Dillingham, then went to Togiak. Dillingham, the hub for Bristol Bay, gets much more air traffic than Togiak, a village of about 800 people, so goods were assured of at least making it there, said Walt Pickett, AC's vice president of operations. It was a convenient staging area for the short flight to Togiak.

While Togiak is in the Bristol Bay region, Bethel and Quinhagak are tightly connected Yukon-Kuskokwim Delta communities. The route between them is over low tundra. There are multiple passenger flights a day. Quinhagak still gets regular mail through Bethel. Alaska Native organizations based in Bethel serve Quinhagak.

"To get to Quinhagak is just always a challenge for us because it's on the Bethel side of the world," said Susanna Henry, the Dillingham-based manager of the Togiak National Wildlife Refuge. "We nearly always have to charter or go through Anchorage."

Quinhagak and Togiak are only about 72 miles apart, but the route is challenging.

"If you ever flew between these mountains there are some areas where the plane starts hitting every turbulence," Jones said. Look out the windows and "there are mountains on both sides."

Yute Air, with its six-passenger Cessna 207s compared to Ravn's bigger nine-passenger 208s, decided not to compete for postal business to Quinhagak.

"For us flying the 207s, we didn't want to do the route for safety reasons," Knesek said. The weather can turn marginal fast. "It's a rough route."

Plus, the route didn't attract passengers, he said.

"All the passenger flow to Quinhagak comes from Bethel," said Bruce McGlasson, one of Grant Aviation's owners. "The Togiak-to-Quinhagak route was so inefficient that we just couldn't afford to fly it."

Ravn doesn't list Togiak as one of its destinations on its website. If someone from the Bethel region wants to go there, a reservation agent said Ravn puts the person on a list and calls when the next mail plane is headed that way.

Flight 3153 originated in Bethel. The plane flew to Quinhagak to pick up Louie John, a Bristol Bay fisherman from Manokotak near Dillingham. The afternoon of Oct. 2, it took off for Togiak. Besides John, Ravn pilots Timothy Cline, 43 of Homer, and Drew Welty, 29 of Anchorage, were killed in the crash.

The National Transportation Safety Board expects to release a preliminary report on the crash Tuesday.

While Togiak is a bypass mail hub, Quinhagak is the only Bush village served out of it, according to the service. Shippers must send at least 1,000 pounds to get the discounted postal rate of about $375 for that size load. The service, not the shippers or the retailers, then must pay the air carriers.

The savings come because agency was able to delete the Dillingham leg on the way to Togiak. That eliminates the expense of a separate small plane trip between Dillingham and Togiak.

"Togiak mail is now transported from the acceptance point in Anchorage directly to Togiak on more efficient mainline equipment rather than Bush aircraft which reduces transportation costs for the Postal Service," Friess said in an emailed response to questions.

Togiak alone, with about 800 people, didn't have enough goods to support the cargo flight, according to air carriers. But with goods for the village of Quinhagak and its 700 residents on the same plane from Anchorage, the arrangement penciled out.

Goodnews Bay is much closer to Togiak, but it's smaller and didn't have enough cargo, Knesek of Yute Air said.

Friess couldn't provide information on how much is saved by the routing.

Back in 2010 when the change was being proposed, the service projected it would save almost $800,000 a year.