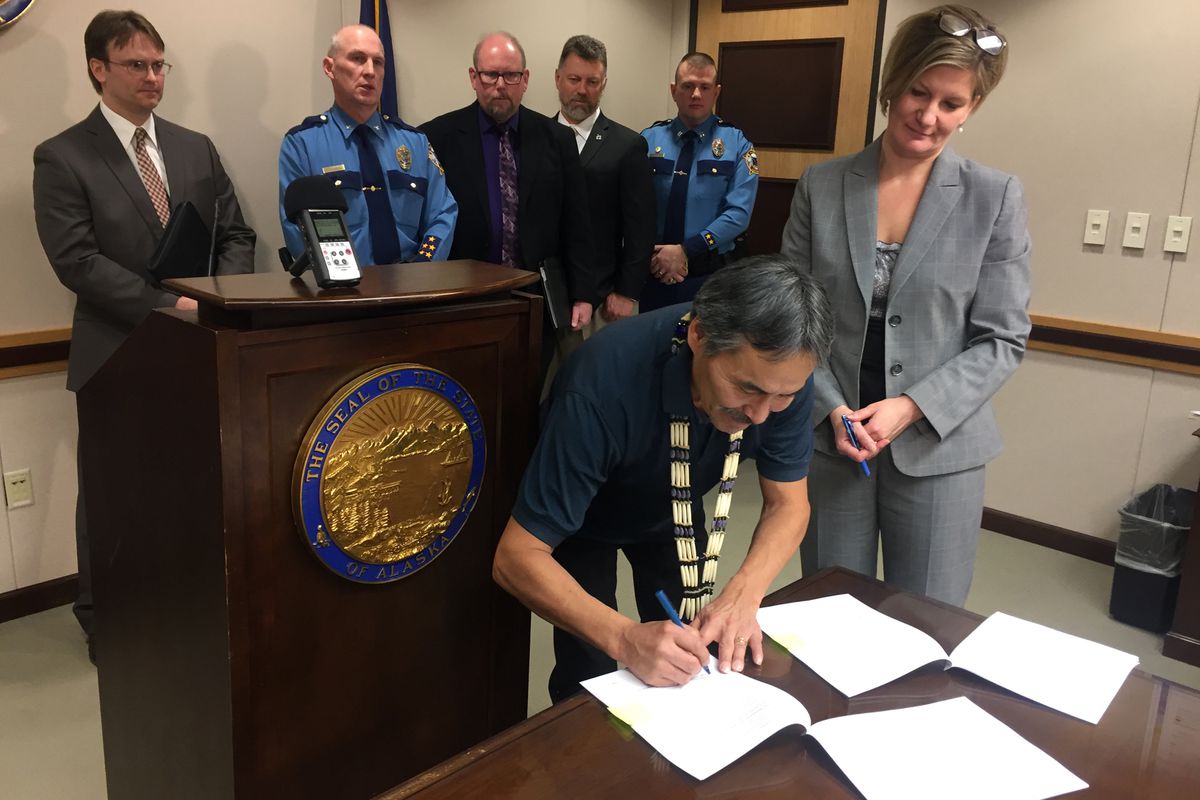 In a landmark agreement designed to combat crime in rural Alaska, the state and a tribal government on Tuesday inked a deal giving the tribe the authority to prosecute low-level criminal offenses the state previously handled — as long as the offender agrees.

Before signing the agreement, she said such deals will save the state money and help tribes fight minor criminal violations by issuing civil penalties. One remedy could involve community reprimand, public apologies and repayment of damages, officials said.

The benefits will be especially useful in scores of remote villages off the road system that lack quick access to Alaska courts and can't easily be reached by state troopers who must fly in from posts in hub cities.

"By partnering with tribal governments, we get culturally based solutions. It's a win-win for the state and the tribes," Lindemuth said.

Lindemuth said the economic benefits to Alaska will be hard to quantify, in part because crimes that might have received no attention from the cash-strapped state can now be addressed at the local level.

"The problem we're facing and we're dealing with even now, with budget concerns, is a lot of low-level misdemeanor crimes aren't getting prosecuted whatsoever," she said, as the state focuses limited law enforcement resources on violent offenders.

"We are hopeful this will allow greater prosecution of offenses and increase public safety," she said.

State and tribal officials have worked on the agreement since 2013, first under Gov. Sean Parnell, a Republican, and in the past two years under Gov. Bill Walker, an independent.

The deal marks continued progress in tribal-state relations that had long been defined primarily by litigation and turf battles, with the state often fighting to keep tribal authority in check.

That approach invited harsh assessments from critics who said the state did provide not enough resources to combat crime in rural Alaska. In 2013, the U.S. Indian Law and Order Commission blasted the state for maintaining a centrally controlled law-enforcement system that contributed to high rates of domestic and sexual violence.

The report from the now-disbanded commission — ordered by Congress — hammered the state for its efforts to frustrate expanded jurisdiction for tribal courts.

Carl Jerue Jr., first chief of the Anvik tribal government, located near the Yukon River in Western Alaska, signed the agreement with Lindemuth during a news conference in Anchorage.

"We see a lack of law and order out in our villages, not only in Anvik, but throughout the state, so this is a good thing that's going to be happening for our tribal members," Jerue said.

The deal would allow tribal courts to provide sentencing for a variety of offenses, most of them petty crimes such as stealing items worth less than $250, or illegal possession of alcohol, a huge problem in many rural villages where residents voted to ban or limit alcohol use.

Offenders who opt to receive tribal sentencing may be a member of a tribe or not. Their violations would not be part of a state criminal record, officials said.

The stiffest crimes eligible for tribal sentencing under the agreement are fourth-degree assault and reckless endangerment, class A misdemeanors, including domestic violence offenses that could involve physical injury.

Qualifying for the tribal remedy in those cases comes with stipulations, including that the person must have no assault convictions in the previous 10 years. Also, domestic violence violations would require an arrest by a state officer, and an arraignment in the state court system, at which point the offender would have the option of choosing a tribal sentence.

A dozen tribal court members who watched the signing hailed the agreement as a positive step for tribes trying to improve public safety and solve problems locally.

One goal is to keep young people out of the criminal justice system, if tribes can correct their behavior, he said. All too often, people who commit small offenses and are prosecuted at the state level continue to break the law, eventually committing more serious violations that prevent them from joining the military or getting jobs, he said.

"We just want to develop young people," he said. "With this system we can stop the revolving door where they get to the point where they can't even have a career."