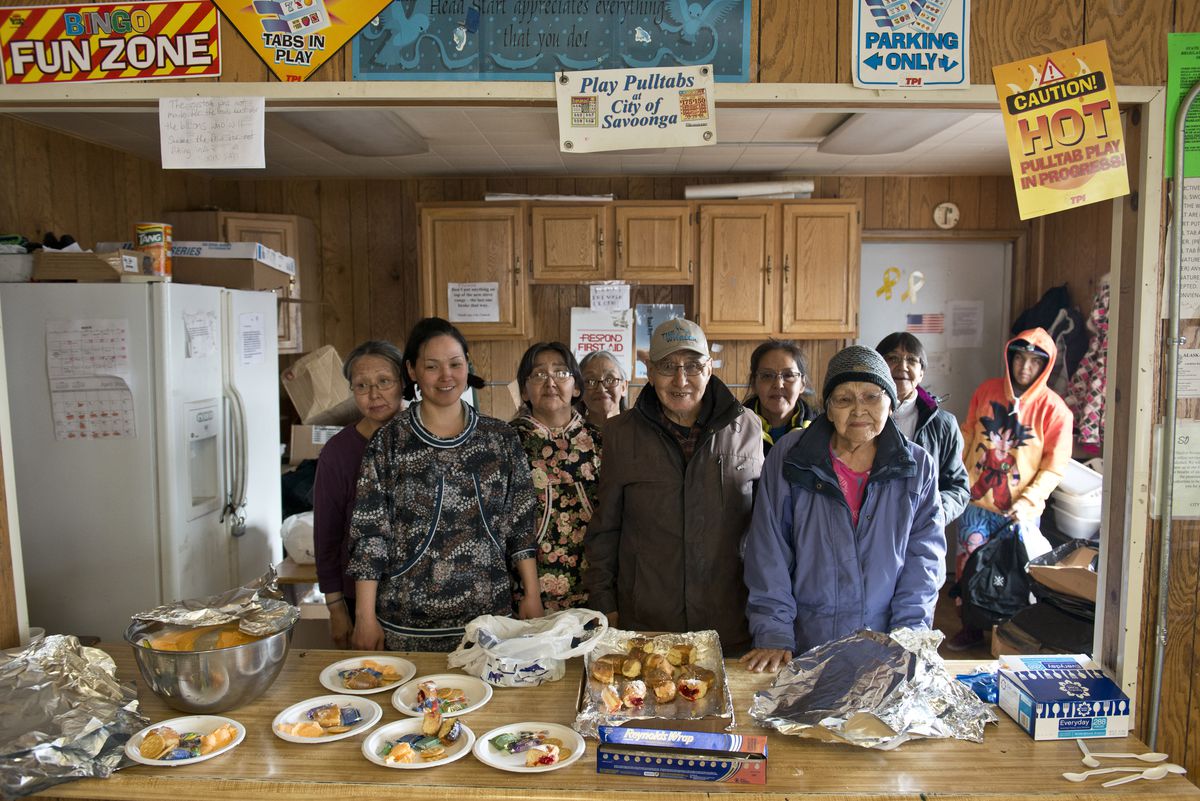 Chester Noongwook, center, a member of the crew that landed Savoonga’s first whale 45 years ago, stands with family and friends during the celebration. Savoonga residents gathered on Friday at the city building for a celebration to honor the 45th anniversary of the landing of the village’s first whale. (Marc Lester / Alaska Dispatch News)

Chester Noongwook, center, a member of the crew that landed Savoonga’s first whale 45 years ago, stands with family and friends during the celebration. Savoonga residents gathered on Friday at the city building for a celebration to honor the 45th anniversary of the landing of the village’s first whale. (Marc Lester / Alaska Dispatch News)

With prayer, song and a buffet that included muktuk from bowhead whale, bowls of reindeer stew, jello and fry bread, the community of Savoonga turned out Thursday to honor its health aides in a first-ever event to underscore their importance to village life.

A day later, the community marked 45 years of subsistence whaling with an event in the city building where some kids said their favorite food is muktuk and an elder shared his memory of the village's first whale catch.

Harriet Penayah, Savoonga's first health aide, said she started as a volunteer, just helping elders with chores and trying to make life better. Then, in 1960, she went to Kotzebue for formal health training.

"When we genuinely connect with people from the earliest days of our lives, simple acts return big reward," said Penayah, now age 84, who spoke first in Siberian Yupik, then again in English. She sang in Yupik too, an old song, and others joined in, their voices washing over the gathering room in the tribal building.

The village has seven health aides now, a group that has received statewide recognition for good work. A new clinic is opening up this summer with more exam rooms.

In emergencies or when planes can't travel the 160-plus miles from Nome, health aides provide life-saving care, village leaders said.

"When the weather is bad, they are like doctors. But they have to call in over the telephone," said Larry Kava, a tribal leader. "Now they have computers that help them."

Two, Brianne Gologergen and Danielle Reynolds, were honored in 2011 by Gov. Sean Parnell as the state's emergency medical services providers of the year for their steady hands and cool heads in treating a gunshot victim. They were both still early in their training. A doctor talked them through how to insert a chest tube.

"That's not something you can do as a health aide," Gologergen said as the community celebration ended.

"But if there is a doctor saying, 'Hey, do this,''' they can, Reynolds clarified. Not long after, they had to do the procedure for another shooting victim.

Now both women have completed all four sessions of health aide training and have reached the most advanced level.

All of Savoonga's health aides last year were honored for their work by the Alaska Native Tribal Health Consortium.

Angie Gorn, Norton Sound Health Corp. chief executive officer, has urged all villages to honor their health aides this month. They play a vital role in a small village but the job carries high stress from treating the ill, the injured and the dying, including friends and family members.

A celebration of whaling

Meanwhile, the community that calls itself the walrus capital of the world also celebrated whaling last week, a hunting tradition that only came to the village in 1972.

The neighboring village of Gambell has a long whaling tradition but the big hunts came more recently to Savoonga, which was established in 1916 as a center for reindeer herding, said Chester Noongwook, now 84. The village of Gambell just landed its second bowhead of spring.

"My dad was the captain and I was the striker, harpooner," Noongwook said.

That whale was landed 45 years ago, almost to the day.

His grandfather wanted to catch a whale and so did his father, and it was his father who landed the first one, Noongwook said. The whole story was too long to tell, he said. His hearing is fading and it had been a long day already.

Noongwook's life has been rich. He served in the Korean War and was in the military more than 40 years, he said.

In 1963, he retired as the last dog sled mail carrier. A framed certificate and faded news feature decorate the wall of the tribal hall. During short winter days, planes would land in Gambell, and he would bring the mail by dog team home to Savoonga once a week over "60 cold and treacherous miles."

As he spoke, some boys sat nearby, listening. They said they love whaling camp and Native foods, especially muktuk with seasoned breading baked in the oven.

He was wearing a hoodie with images of a whale and walrus, a reindeer and a halibut with a drummer at center.