‘The permafrost is dying’: Bethel sees increased shifting of roads and buildings 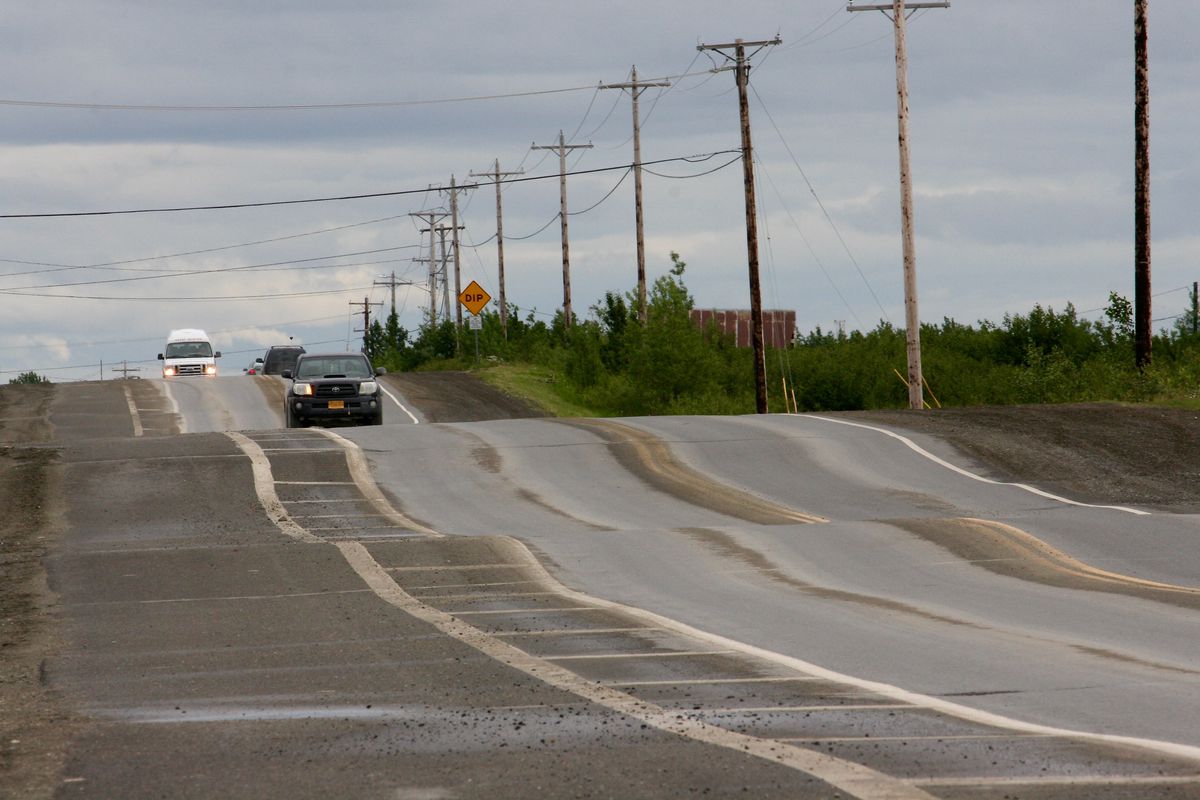 Chief Eddie Hoffman Highway, seen on June 28, is the main thoroughfare in Bethel, and one of few paved roads. It has become a roller coaster of a ride over the past couple of years. The state Department of Transportation is studying whether heaving from the thaw-freeze of permafrost is a factor. (Lisa Demer / Alaska Dispatch News)

Chief Eddie Hoffman Highway, seen on June 28, is the main thoroughfare in Bethel, and one of few paved roads. It has become a roller coaster of a ride over the past couple of years. The state Department of Transportation is studying whether heaving from the thaw-freeze of permafrost is a factor. (Lisa Demer / Alaska Dispatch News)

Permafrost in and around Bethel is deteriorating and shrinking, even more quickly than most places in Alaska.

Since the first buildings out here, people have struggled with the freeze and thaw of the soils above the permafrost. Now those challenges are amplified.

"What they are saying is the permafrost is dying," said Eric Whitney, a home inspector and energy auditor in Bethel who has noticed newly eroding river banks, slanting spruce trees and homes shifting anew just weeks after being made level. "I'm just assuming it is not coming back while we're around here."

Engineers designing new buildings and roads battle complex forces of nature in dealing with permafrost thaw. One big project — addressing what appear as fierce frost heaves on Chief Eddie Hoffman Highway, one of the main roads through town — is still short on answers.

In the wild, boggy lands of the Yukon-Kuskokwim Delta, a tundra blanket naturally insulates ice-rich permafrost. But in much of Bethel and surrounding villages, that blanket is long gone.

"When you lose the tundra, you lose your insulation," said Mike Salzbrun, owner of foundation and geotechnical contractor Salzbrun Services and Drilling, with decades of experience on the Y-K Delta.

Permafrost here is considered "warm," maybe a fraction of a degree below freezing, so it's sensitive to just a slight warming of the air, said Vladimir Romanovsky, geophysics professor and permafrost researcher at the University of Alaska Fairbanks.

On the North Slope, the permafrost is colder and more stable to start with, but it still is losing ice from the top down, he said.

Above the permafrost in Southwest Alaska, an active layer of soil, often peat, freezes and thaws each year. With air temperatures warming too, the active layer is growing bigger, consuming what had been thought of as permanently frozen.

Thirty years ago, crews would hit permafrost within 4 to 6 feet of the surface, Salzburn said. Now they typically find it 8 to 12 feet down. To install piling deep enough into permafrost to support a house, they used to drill down about 18 feet.

"Now we are going to depths of 35 feet," Salzbrun said.

"There is a definite change," said another Bethel contractor, Rick Hanson of T and H Leveling.

Out here, leveling a building doesn't mean bulldozing it to the ground but, rather, making it level again.

As permafrost under a structure thaws, strange things happen. Permafrost is laden with ice but it's not uniform and much about it is still unknown, Romanovsky said. Watery voids create instability where ice once held firm.

"People can't close their outside door. That's when they call and say, 'Hey, I got a problem,' " Hanson said.

The whole house might sink so much that a wastewater line no longer has enough slope. Tubs won't drain well. Toilets need repeat flushes in a town where many people ration their home-delivered water. Low spots in pipes become bellies that trap wastewater, then freeze and burst in wintertime.

Many homes are built on posts set on wooden pads that act like snowshoes, preventing the structure from sinking into sand or gravel fill. Most need regular leveling, which involves jacking up a house and, at a minimum, adding wood shims under posts to even it out.

Some of the problems are being addressed with better materials to keep heat from escaping and that hold up better, along with designs that theoretically are easier to adjust when part of a building sinks. But that adds costs in a place where building materials already are expensive.

Between the active freeze-thaw layer and the permafrost, there used to be another section that didn't refreeze each winter. In recent years with little snow, that layer freezes too, heaving what is above.

"It really makes a difference in the way things jack around," Salzbrun said.

In the heart of Bethel, the Office of Children's Services building shifted last year due to permafrost thaw and freeze. In October, it was leveled, like it had been periodically, but this time the interior was damaged in the process, said Sharon Lechner, president of the company that owned the building, Tunista Inc., a subsidiary of Calista Corp. After disagreement on what to do, the state lease ended early, she said. In June, the building was demolished.

With warming, thawing and refreezing, people involved in Yukon-Kuskokwim Delta construction and maintenance believe more buildings are shifting, and doing so to a greater degree. There's no hard data yet but that may come.

With aging buildings, the root cause of foundation problems can be hard to pinpoint, say officials with Yukon-Kuskokwim Health Corp., the Alaska Native-owned corporation that runs village health clinics along with the hospital in Bethel.

YKHC is just starting to track how often its clinics, in leased space, need leveling. The most recent reviews found that 23 of 41 clinics needed at least minor leveling, said Brian Lefferts, YKHC director of environmental health and engineering.

Engineers and builders are adjusting techniques and designs.

The biggest construction project on the Yukon-Kuskokwim Delta is the $300 million expansion and remake of the YKHC hospital and outpatient clinics in Bethel.

Under the existing hospital, the permafrost stays frozen in some areas but has thawed near the perimeter. For the building expansion, engineers evaluated whether to add thermal probes, which extract heat and keep the ground frozen for stability, said Kent Crandall, with the firm Arcadis and the project manager for YKHC. Or they could drill down 110 feet for steel supports, deep enough that the ground didn't have to remain frozen for the three-story addition to be stable, he said. No one wants this building to move.

"That design assumed that everything would all thaw in the long run," Crandall said.

Because the existing hospital, on some permafrost, will tie into the addition, engineers decided to go the other way and install the heat-extracting probes under both the old and new buildings to freeze the ground uniformly, he said. The new pile supports go 55 feet deep, easier to install than the even-longer steel, he said.

In addition, the project includes insulation on the bottom of the buildings and, like the tundra, insulation on top of the ground. As further insurance, a ground loop cooling system is being installed under the building that can be powered up to keep the ground frozen if winters become too warm, Crandall said.

Crews put temperature sensors into the ground at the project site and already know the soils are warming, he said.

"It's a fact we've disrupted the balance," Crandall said.

With thick insulation and various cooling systems, he said, the design intends for the hospital complex to long be "a frozen island."

The most visible sign of disrupted infrastructure in Bethel is the roller coaster of a ride that is Chief Eddie Hoffman Highway, the busiest road in town.

Maintenance workers this summer installed warning signs. One near the airport alerts drivers to dips for the next 4 miles. "Bump," says another.

"That would be a rough road anywhere in the state," said Scott Thomas, a regional traffic and safety engineer for the Alaska Department of Transportation.

Workers glued down orange markers in sections to better separate the highway from a paved pathway where people walk and bike, Thomas said. Some drivers were veering into the pathway or shoulder to avoid the worst dips. Some of the orange markers already are down.

Cab drivers and others who make frequent trips say it's a jarring drive but at least the pavement is intact.

"I just have to watch out," said Quyana Cab driver Dan Kim. "I usually ask the customer if they are OK with a little bump in the road if I fly right through."

Kim said he slows down when driving pregnant women who flew in from villages to spend their final month at the YKHC prematernal home.

"We don't want to induce labor," he said.

Officials suspect thawing permafrost. Some of the problem might also stem from culverts that trap air under the roadway and hasten thaw, Hughes said.

A project in 1989 added heat-extracting siphons but they no longer appear to be in place, Hughes said. Whether that would be a good solution now is something to investigate further, he said.

The highway was last repaved in a project that began in 2006 and included a 6-inch base of insulating foam asphalt material that helped the pavement hold up this long, Hughes said.

Some locals remember when the road was gravel and said it was better then. DOT records show that it had pavement of one kind or another since the early 1970s, Hughes said.

It’s true that a gravel road can be more easily evened out but it also requires more day-to-day maintenance, he said. Plus, gravel is dusty and has to be replenished regularly, said Bethel Mayor Rick Robb.