It’s one of the poorest places in the U.S. Can residents of the Lower Yukon make it better? 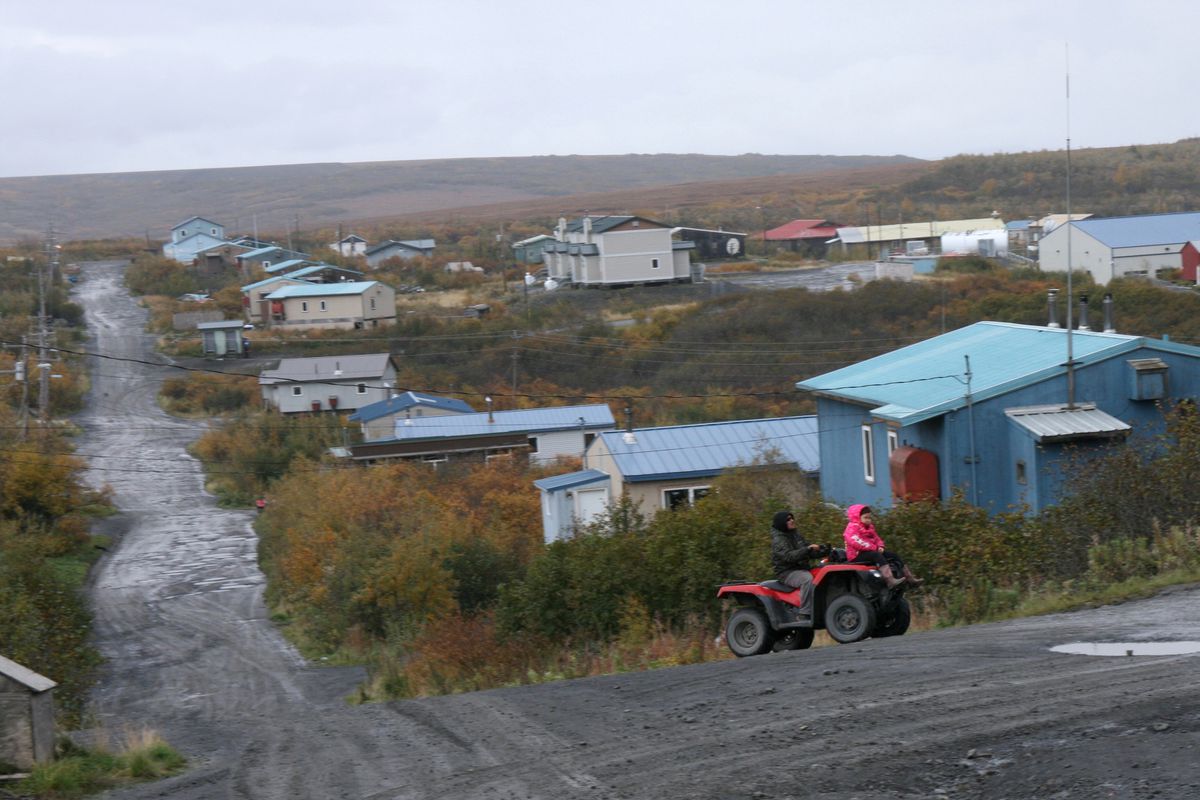 MOUNTAIN VILLAGE – In a community building with cracked windows and ripped floors, in a region with few jobs and deep trauma, leaders of 13 Southwest Alaska villages are imagining a turn away from what is broken.

For the first time in memory, leaders of tribes, city governments and Alaska Native village corporations from throughout the Lower Yukon area came together recently for economic development and advocacy.

"We're bigger than Bethel," said Loren Peterson, the 40-year-old chief executive and board chairman of Azachorof Inc., the village corporation for Mountain Village and the man leading the charge. "When we're combined we can be more effective than Nome. When we're combined and united together, we can be just as effective as Barrow, a first-class city."

Just over 8,000 people live in the 13 largely Yup'ik villages in the Kusilvak Census Area, from Hooper Bay on the coast to Emmonak at the Yukon River mouth to Russian Mission upriver. Mountain Village, on the north bank of the Yukon, is in the middle.

In comparison, more than 6,000 people live in Bethel, though its importance is amplified as a hub for about 26,000 people in 50 villages across the Yukon-Kuskokwim Delta, including these 13.

Almost two years ago, the village corporation started work on what they for now call the Kusilvak Economic Development & Advocacy Alliance.

The area gained the name Kusilvak from nearby mountains in 2015 after publicity about the former namesake, Wade Hampton, a slave owner and Confederate general who never came to Alaska.

At its heart, the new effort is about the future of village Alaska.

"There are people who say villages should not exist," Emil Notti, an Alaska Native leader who was one of the founders of the Alaska Federation of Natives, told the 50-plus people gathered in Mountain Village for a two-day summit. "They say there is no reason for villages to exist. They say the state cannot afford to continue to support the villages."

But in reality, he said, rural Alaska has been the source of the wealth that fueled the state's development, oil on the North Slope and gold in Nome, timber in Southeast and salmon in Bristol Bay.

The question should be, Notti said, "Can rural Alaska continue to support the growth of cities?"

The effort to unify over economic projects is appealing to those in the villages and some of Alaska's top leaders too.

"We are gathered today just to be as one, to work as one. And this is our goal," Mountain Village Mayor Peter "Matt" Andrews said at the start of the summit, which drew about 55 people.

The village corporation covered most bills with a $20,000 grant from the Alaska Conservation Foundation and $5,000 from Calista Corp. Grant Aviation and Ravn Alaska gave breaks on flights. Alaska Commercial Co. donated food. One night the community put on a potluck that included moose stew and salmon spread. The city, the school district and a church pitched in with donated lodging. In all, the effort to unite Lower Yukon villages has cost about $50,000 over two years, Peterson said.

U.S. Sen. Dan Sullivan called in to encourage the effort. Sen. Lisa Murkowski sent a video in which she talked about how to lower energy costs. Gerad Godfrey, Gov. Bill Walker's rural affairs adviser, stressed the importance of fast internet as a key support.

Former U.S. Sen. Mark Begich flew in for the mid-September summit as a side trip before work in New York for the United Nations. He told the group in Mountain Village that successful communities around the world put their focus on the future.

"The ones that only stay in the moment and fight over the moment never move ahead," Begich said.

Peterson's own village is fractured. Last year, village corporation shareholders with concerns about voting protocols disrupted the annual meeting. It had to be rescheduled. Some shareholders are still upset. One was barred from the summit.

The city of Mountain Village was a partner in the summit, but the tribe didn't sign on. On the first day, tribal leaders sat off to the side. By day two, they had moved up to the main table.

Misunderstandings sometimes get in the way, tribal council member Gloria George said. She was hopeful things could turn around, that groups could "piggyback with each other on projects."

Alaska Natives and their connection to the land and waters make Alaska what it is, said Medicine Crow, who originally is from Kake in Southeast Alaska.

"If it weren't for us, this place would be California, Colorado, anyplace else," she said.

Alaska Native people don't have to be invited to sit at the table, she said. "It's our table."

Opportunity in a spring?

In the Yukon-Kuskokwim Delta, there's barely an economic rumble, much less a boom. A salmon processing plant in Emmonak at the mouth of the Yukon River bustles each summer, but high-seas crab and pollock fisheries subsidize it. The proposed Donlin gold mine, off the Kuskokwim River, holds promise but is under environmental review. If it goes forward, the mine is years away from operation.

In Mountain Village, there are two small stores and a gas station but no other businesses. No snack stand, even when a fish-buying barge docks in town. No place for haircuts or snowmachine repair. There are rustic city and school bunkhouses for rotating visitors but not the sort of lodging or restaurant essential for tourism.

The isolation of the area adds 40 percent or more to the cost of goods for shipping, said Jason Smith of the Association of Village Council Presidents. The entire region is off the road system, though a road connects Mountain Village to St. Marys and Pitkas Point.

Energy costs are more than double what they are in Anchorage, he said.

Village leaders, and those advising them, see opportunity in an economic desert. Maybe some of these Yukon communities can open lodges to attract eco-tourists. Maybe one community could open a Polaris dealership serving the rest.

Businesses will invest in communities that take care of themselves, said Nolan Klouda, executive director of the University of Alaska Center for Economic Development. The center will help villages by doing feasibility studies for potential ventures.

Kaktovik, on the North Slope, draws visitors for polar bear viewing. His stepfather in Old Harbor on Kodiak Island bootstrapped his own fishing charter and hunting operation. Now there are two lodges, including one that hires locals to take guests fishing.

Look to natural resources as well, he said, noting that the Native tribe in Napaimute on the Kuskokwim River started a timber operation.

In Mountain Village, fresh, pure spring water flows from Azachorok Hill at the edge of town. One evening, Peterson brought visitors to the spring to fill empty LaCroix cans with a taste.

Why not bottle and sell it? said Emmonak city manager and former state Rep. Martin Moore.

"The market is all over the world," Moore said. "Everybody wants a good glass of water." Indeed, many at the meeting were sipping on bottled water from elsewhere.

The cost of building a bottling plant and shipping out the water would be high, the village corporation earlier determined. It might be worth another look, some at the summit said.

Moore had other ideas too. Why not investigate developing hydropower on the Yukon River? With cheap electricity, manufacturing is more likely, he said.

"I'm talking to you about real things," he said.

By economic measures, Kusilvak is the poorest area in Alaska and one of the poorest in the country. Unemployment topped 21 percent in August. Per-capita income, just over $11,000, places it third lowest among all county-type regions in the country, Peterson said at the summit.

For all that, lives are marked by the riches of seasons. Most everyone has this year's moose and salmon in the freezer. Families take boating trips to gather tundra berries and wild greens. A gallon of milk is $15 in the village store, so people make do with cheaper powdered milk.

Others talked about suicide prevention and the need to heal. Between January and July, five teens and young adults in Mountain Village alone killed themselves, according to residents.

As Elise Murchison, wife of the Mountain Village Covenant Church pastor, observed before the summit: "The community itself is almost in a constant state of grief."

"We are not strangers to pain," said tribal leader George, who lost a niece and nephew to suicide three weeks apart.

Crowded and worn-out housing is an issue too. One community leader in Mountain Village pays $50 a month to live in a tiny cabin with a honey bucket for a toilet.

She led an exercise that concluded the single thing that could most influence everything else was being unified.

The Kotzebue region already is unified, with the chief executives and board chairmen from regional groups including NANA Regional Corp. and the Northwest Arctic Borough joined together on a leadership team, said Andy Baker, who served on it as assembly chair and then helped as a consultant.

The structure is simpler than what the Yukon is looking at, and the focus was government funding for projects, not private development. But it works for Northwest Alaska.

"This united voice has led to huge success such as new schools in every village in the region," Baker said in an email. A long-term care wing for elders was added to the hospital. The local technical school was expanded.

At the end of the Kusilvak summit, 10 people signed up for a working group to figure out next steps.

For this effort to succeed, Peterson said, it needs support from a majority of the organizations in the Kusilvak Census Area.

"We need to do something at the bottom up," he said. "It's not about just waiting for what government can do to help us."