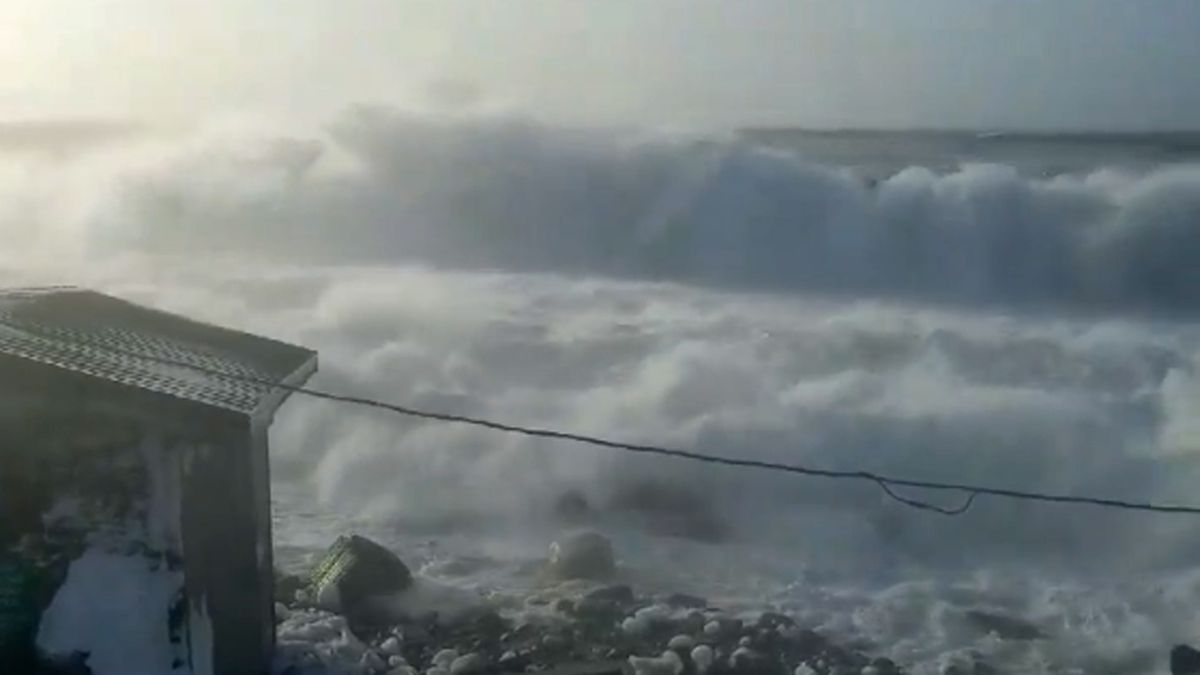 A storm pummelled the coast at the village of Diomede in the Bering Strait on Feb. 20. (Betty Soolook)

A storm pummelled the coast at the village of Diomede in the Bering Strait on Feb. 20. (Betty Soolook)

A swath of sea ice the size of Minnesota vanished from the northern Bering Sea  as warm storms pummeled the region this month, causing ice coverage to fall well below a record low set 17 years ago, scientists say.

About half the ice in the Bering Sea disappeared during a two-week period that ended Saturday, said Rick Thoman, climate scientist with the National Weather Service in Alaska.

The unusual conditions have stunned residents of the region, who say they've never seen so much water around their islands in late February.

"(Now) it's just all open water, between this island and Siberia," said Edmond Apassingok, 54 and a hunter from the village of Gambell on St. Lawrence Island. "It's undescribable. It's crazy. Time is broken."

In a normal winter, sea ice would be piled high along the coast, he said.

Ice coverage rebounded a bit over the weekend, Thoman said on Monday. But another southerly storm set to arrive early Thursday — with expected gusts up to 60 mph prompting a high-surf advisory — could break up the new ice.

"The atmosphere is warm, the sea surface is warm, and that's conspired to create a completely unprecedented ice season in the Bering Sea," said Thoman.

Bering Sea ice coverage is about half the size it was during the previous low for late February, set in 2001, he said.

"This is by far the worst ice extent we've seen for this time of year," Thoman said.

About 150 miles north of St. Lawrence, on Little Diomede in the Bering Strait, Betty Soolook captured footage of waves from a Feb. 20 storm pummeling her village of Diomede.

Soolook said the lack of solid sea ice along the shore is shocking to see.

In the video posted on Facebook, heavy surf pounds the coast, sending debris and water crashing against buildings, including the village water treatment plant. Ocean-swept chunks of ice litter the ground.

The storm knocked the village's power out that day, said Soolook, acting city clerk in the village.

That storm was the largest of about 10 that hammered the region during the two weeks, said Jim Brader, a National Weather Service meteorologist in Fairbanks.

"To tell you the truth I can't remember all the storms," he said.

[North Pole surges above freezing in the dead of winter, stunning scientists]

Before that storm, he issued a flood warning for Diomede, Gambell and other villages, a first in February after 30 years on the job, he said.

Usually, there'd be thick pack ice in the region to help dampen waves, he said. But the open water has extended north of the strait, about 250 miles north of where it should be, he said.

The terrible conditions have hurt opportunities for hunting, said Soolook, 39.

Early this month, Soolook's brother and another hunter went fishing for crabs on an ice sheet they thought was locked in place. But it soon began drifting away.

"They had to ice hop to get back on shore," she said, adding that the men traveled between ice floes.

"They made it safely," but they lost crabbing supplies on the ice.

Apassingok in Gambell said on Monday that it's felt like autumn outside, with the stormy weather and temperatures sometimes jumping above freezing.

Temperatures should be far below zero, he said.

Towering waves have caused rapid erosion on a large portion of shore near Gambell, sending sea water and icy debris over the village's asphalt airstrip, he said.

"These huge swells come here unabated and crash onto our gravel beach," he said.

Less sea ice in recent years has led to reduced spring walrus harvests in Gambell and other communities, prompting villages to declare economic disasters in 2013 and 2015 that led to food donations.

Hunters have blamed the poor hunts on the reduction in stable sea ice where walrus were once typically hunted, and bad weather that forced crews to remain onshore as walrus migrated past villages.

Now, winter hunters head out in skiffs in open water whenever possible, keeping an eye out for any available prey, said Appasingok.

Because of threats from storms they often don't have long.

In the past, whaling crews in February would be cutting a trail through jagged ice locked to the shore, he said. They'd drag a small boat to openings in the sea ice where bowhead whales would appear, usually in April, he said.

But there's no shorefast ice to work from, he said.

"We are adapting as we go along," said Apassingok.