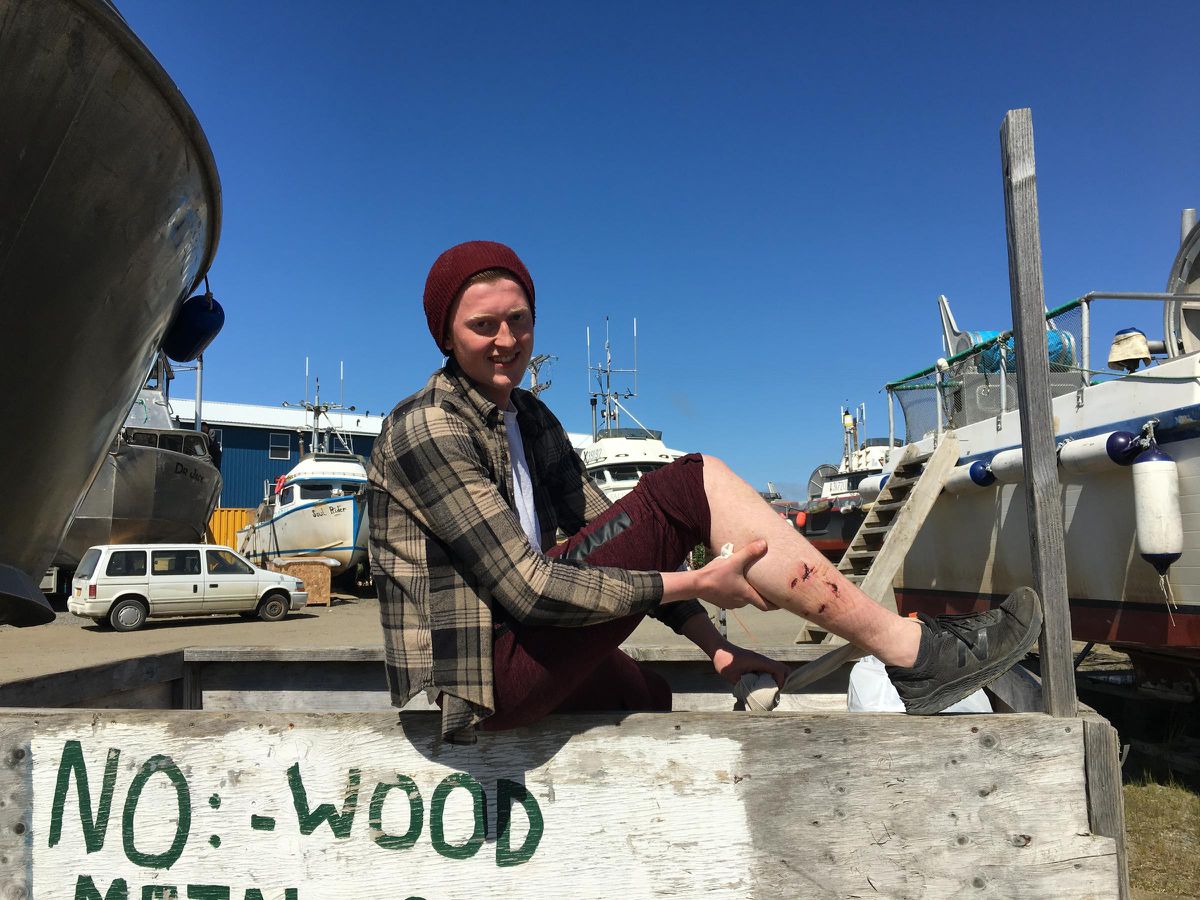 Nineteen-year-old Stig Ure poses for a photograph on the dumpster where he surprised a bear early on the morning of June 3, 2018, in the Upper Lummy boatyard in Naknek. (Mitch Borden / KDLG)

Nineteen-year-old Stig Ure poses for a photograph on the dumpster where he surprised a bear early on the morning of June 3, 2018, in the Upper Lummy boatyard in Naknek. (Mitch Borden / KDLG)

Bears have been a big topic of discussion around Naknek boatyards since one young fisherman was attacked earlier this month. Bears are known to come into town as fishermen arrive and live on their boats while they prepare for the summer salmon season. But, even though bears are nothing new, it's been years since anyone's been mauled.

KDLG caught up with the fisherman who was attacked.

It was dark when 19-year-old Stig Ure found himself walking through the Upper Lummy boatyard around 2 a.m. June 3. He was close to his father's salmon boat, the Coachman II, where he was staying, when his night took a turn for the worse.

The bear was eating out of a dumpster when Ure surprised it. Almost immediately, Ure reacted.

"I just kinda turned into an animal like at that point. Instinct just kicked in, and I bolted."

Ure was only about 50 feet away from his father's boat. He thought if he could just make it there, he'd be safe. But the bear overtook him.

"I got about halfway across the street to my dad's boat when this bear took me down, and he first bit my right calf and I hit the ground," he said.

Everything slowed down for Ure at this point. He said all he could think was, "This isn't how I'm dying." So, he leaned into his instincts.

"I turned around as fast as I can and with as much might as I can muster, I hit the bear twice as hard as I can in the snout," he said.

The bear was stunned, which gave Ure the chance to make it to his father's boat. He got there, but not before the bear made one more attempt at getting him.

According to Ure, "He ended up nipping me in my right gluteus maximus."

The bear ran away, and Ure wandered onto the boat and, while bleeding, sat down in the captain's chair. He said he was in complete shock and sat there for hours.

Around 6 in the morning, he got up and went to bed. When he woke up an hour later, all the memories of what had happened came flooding back to him.

His father found him and took him to Naknek's clinic, where he received 14 stitches for his leg wound. The second bite didn't break the skin.

Looking back at his experience, Ure isn't mad at the bear. He thinks it attacked because it felt threatened. He has been a bit more cautious around the boatyard, but the incident hasn't changed his routine too much.

"(I'm) pretty comfortable walking around," he said. "It's all about just making noise and making sure that you know, the bears know that you're there because usually they'll try and steer clear of you."

The bear may have chased him because he ran, Ure admitted, but he also believes it may have attacked if he hadn't. When it comes down to what happened that night, Ure isn't second-guessing how he handled the situation.

"Acting is also what kinda saved my life."

The Alaska Department of Fish and Game and the Alaska State Wildlife Troopers were put on alert, and two juvenile cubs were killed near the location of the attack as a result. Fish and Game believes one of those bears was the one that attacked Ure.

Since his encounter, Ure has pretty much recuperated from the incident. Now, he's among the thousands of fishermen out in Bristol Bay waiting for the commercial salmon season to take off.

This story is republished with permission from KDLG.