‘We are one’: As Kotzebue prays for return of missing girl, an entire state joins in 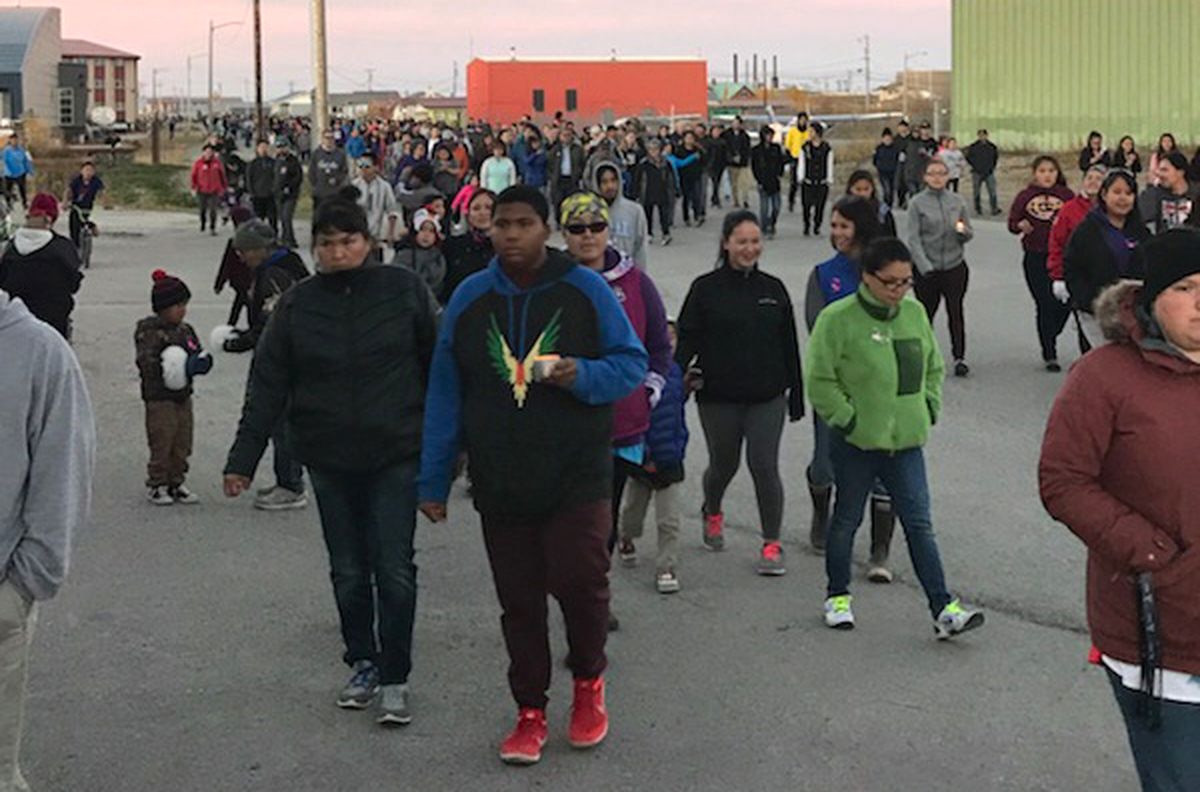 Hundreds of people in Kotzebue turned out for a candlelight vigil for Ashley Johnson-Barr, the 10-year-old missing for more than a week, on Thursday, Sept. 13 2018. (Photo by Kookie Ito)

Hundreds of people in Kotzebue turned out for a candlelight vigil for Ashley Johnson-Barr, the 10-year-old missing for more than a week, on Thursday, Sept. 13 2018. (Photo by Kookie Ito)

But it's not just Kotzebue offering prayers in support of a family caught between hope and grief as they wait for word of the little girl with the sweet smile who's been missing for more than a week.

By Friday, people in dozens of villages and cities across Alaska were holding walks or prayer sessions or wearing purple — the girl's favorite color — in support of the people of Kotzebue and Ashley's parents, Walter "Scotty" Barr and Josie Johnson.

Their daughter disappeared Sept. 6. She was last seen at the Rainbow Park playground at 5:30 or 6 p.m., headed home. She never got there. Her cell phone, found in the street near the NANA Regional Corp. building, is the only physical evidence that's turned up, authorities said.

As of Friday morning, walks had occurred or were planned in more than 40 Alaska communities, from Chevak and Chugiak to Wales and Wasilla, according to a list Kotzebue resident Maija Lukin put together.

"Don't let anyone tell you Alaska isn't a small town. We stick together. We take care of our own," Lukin wrote. "Our whole state feels the hurt that Kotzebue feels. We are one."

Scotty Barr said in a text message Friday that his daughter was a "very happy person" who "always had a smile no matter what."

Ashley liked playing basketball and went to church every week, Barr wrote. She loved to use her allowance to buy things for her friends, he said. She loved her niece and was "willing to do anything for her."

The family has repeatedly thanked searchers and community members for the support they're receiving.

Upward of 300 people came to the candlelight vigil Thursday night in Kotzebue, organizer Kookie Ito said. They saw a cloud in the shape of an angel appear in the sky.

"I'm OVERWHELMED the positive support we have," Ito wrote in a message Friday.

Residents held a walk Wednesday night attended by about 150 people, some holding signs saying things like "Bring Ashley Home" and "One Missing Child is One Too Many."

Since the weekend, people have stopped what they're doing every evening to pray at 5:30 p.m. That's not just in Kotzebue, Lukin says, but in neighboring villages, in other states, even other countries.

People hug each other at the store, Lukin said. "There's a real sense of closeness that I've seen. People stop you on the street and ask you how are you doing? In times of tragedy, this place really becomes your entire family."

Alaska State Troopers announced Thursday that the massive search effort that began days ago was shifting in focus to an investigation into what happened — and whether Johnson-Barr's disappearance involved a criminal act.

Five other FBI agents that had traveled to Kotzebue had left the city for other assignments, Taylor said.

Taylor said there had been discussions about cycling staff into the city, and putting new teams in place, in order to maintain a "robust level of law enforcement."

['Someone knows': Authorities shift focus to possible crime in search for Kotzebue girl]

Friday morning, the usual corps of 35 to 50 volunteers turned up at the Northwest Arctic Borough building for the 10 a.m. briefing. They were sent to neighborhoods still being canvassed to follow up on leads, and paired up with law enforcement, Taylor said.

Other searchers went toward fish camps outside the city, Taylor said.

A local tip line set up yesterday has brought in leads that officers are pursuing, Taylor said.

The girl's Samsung smart phone is in Anchorage, where troopers are working with a forensic analyst and cell phone service provider to "try and pull some call details to see if any phone calls were received, text messages were received," he said.

"Especially knowing that in her case she lives on the north end of town. And her phone was found on the south end of town," Ralston said.

He said the community appreciates all the support from Alaska and other states, and continues to hope for the best.

"Hopefully it will be a good outcome on this but you know if it isn't, we're still going to support them, show them our love," the mayor said, of Johnson and Barr. "I'm very proud to be a resident of this community, the city of Kotzebue."