‘She knew who he was’: Unified by loss, Kotzebue puzzles over arrest in child homicide case 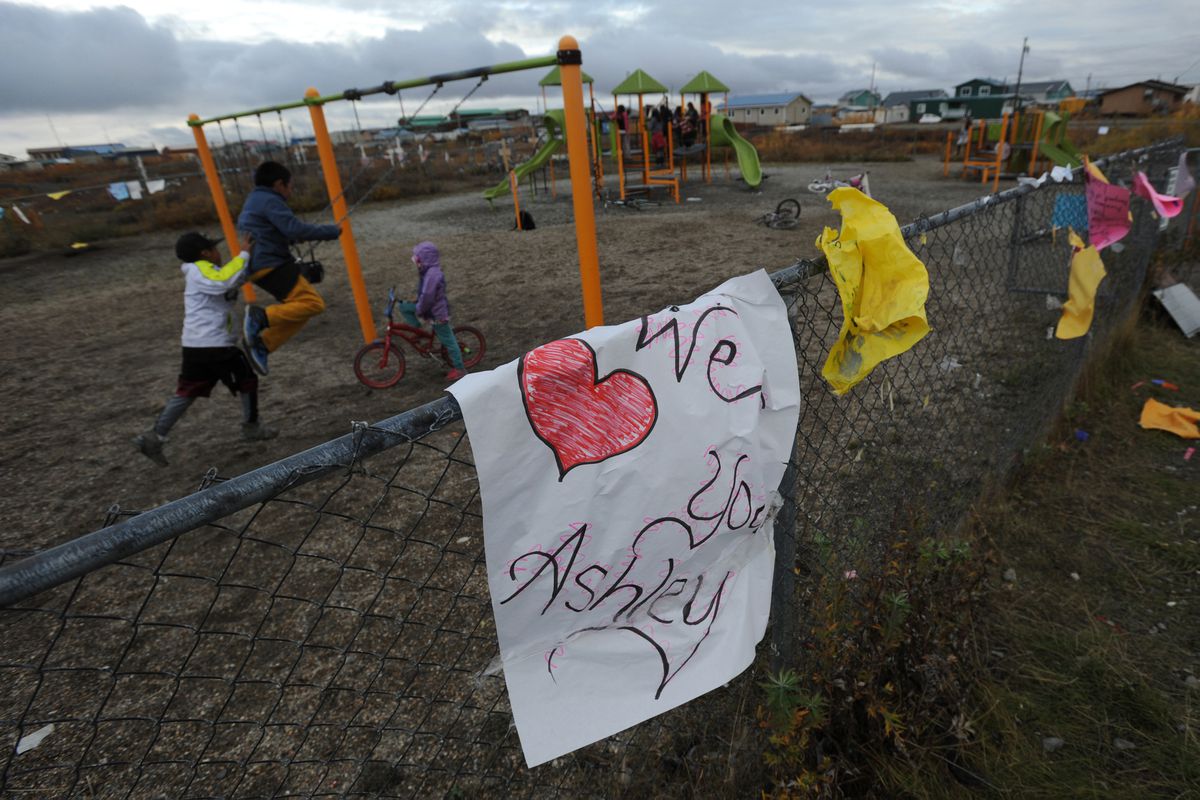 KOTZEBUE — The search is over. The FBI has flown home. But the questions about how 10-year-old Ashley Johnson-Barr died are just beginning.

At the core of the mystery: Who is Peter Vance Wilson, the 41-year-old man charged with lying to the FBI about the girl's death and disappearance? In a small town with deep family roots, residents of the Northwest Alaska community said they recognized Wilson's face — enough to wave hello as he walked the seaside streets alone — but know little else about the man.

Ida Jackson said all she knows is that the way he watched her children made her uncomfortable.

"He would be over there just watching them jump (on the trampoline)," said Jackson, whose Front Street house neighbors a home where Wilson could be found visiting at all hours.

"He would act like he's trying to clean up that side of the yard. I told my kids not to go on the other side of the trampoline," said Jackson. Her 11-year-old daughter played basketball with Johnson-Barr, who sometimes shared her gum and candy with teammates.

The death of the fifth-grader, who disappeared from a playground in the center of town on Sept. 6, jolted and unified the city of 3,200.

For the first time, a mother of two began locking her front door at night. Kids parked bicycles and clicked on TVs in the waning hours of Arctic daylight. On any given day, as many as 150 searchers and other volunteers scoured the peninsula until the discovery of Ashley's body on the tundra east of town, more than 2 miles from the street where she was last seen.

In Anchorage, meanwhile, Wilson made a first court appearance Tuesday on federal charges that he misled investigators about key details in the case. Prosecutors say Ashley's cell phone had been found ringing in Wilson's jacket, and that Wilson falsely claimed when questioned by police in Kotzebue that he did not drive a four-wheeler the night she disappeared, that he did not know who she was, despite multiple visits to her family home.

Sophia Burnette, who identified herself as Wilson's cousin, said Wilson had launched a six-week drinking binge in the summer. He was deeply shaken by his interview with the investigators, she said.

A day or two after that interview, Kotzebue resident Robert Fleming ran into Wilson behind the Alaska Commercial store.

"He was kind of tripping," Fleming said. The first thing Wilson said was that the police were looking at him in the case because he had Ashley's cell phone.

"'I think I'm going to skip town and head out toward tent city and hide out,'" Wilson told him, referring to a spot outside of town where people go in the summer to dry fish.

"He's normally quiet but that day he was very talkative," said Fleming, who has known Wilson all his life and said he drifted from home to home. "Moving fast. It's not the Petey I know."

The federal charges against Wilson describe Ashley's death as a homicide but do not say how she died. Neither Wilson, nor anyone else, has been accused of the killing.

As a potlatch and funeral approaches, the city is waiting to see what — if any — charges will follow.

The place where searchers found the child's body is about a 10-minute drive out of town, near a water reservoir called Devil's Lake. It would take more than 45 minutes to walk there from Rainbow Park, where authorities say she was playing before she disappeared.

The road to the lake is part of a miles-long loop that turns from asphalt to mud to gravel, lined by orange-gold shrubs and rolling tundra. The charges against Wilson say the body lay about a quarter-mile from the nearest road, in an area accessible only by foot or four-wheeler.

Kotzebue resident Karen Triplett drove near the area Tuesday as she scouted for bears before a round of cranberry picking. "(Ashley) is in my grand-daughter's classes," she said.

As for Wilson? "I've seen him around town, but I don't know him," said Triplett, an often-repeated sentiment following the arrest.

Ashley Johnson-Barr's uncle, Wayne Johnson, said he went to school in the village of Kiana with two of Wilson's siblings. But he doesn't recall talking to Peter Wilson.

"His family moves around quite a bit," he said. "I've seen him a few times."

Johnson stood at the Front Street retaining wall and watched as two seals bobbed in the water, occasionally slipping beneath the surface. Eating minnows, he said.

He held his squirming daughter, who wore a pink snowsuit in the wet chill. When he learned Ashley had disappeared, Johnson asked for time off from his job at Red Dog mine and joined the search.

His sister is Ashley's mother, he said. Two of seven siblings. Everyone came home to help.

"This is the first time we had all of our brothers and sisters all in one place in 18 years, at least," he said.

Johnson said he wonders if more than one person was involved in Ashley's death. Scotty Barr, the girl's father, said in a text that he doesn't know.

The entire case is puzzling in a town where everyone knows everyone by their face, their car, their family.

But Wilson told police that he did not know who Ashley Johnson-Barr was, according to the charges against him.

Johnson, Ashley's uncle, said that's not true. "He has gone to Scotty's (Ashley's father's) place a few times. So he knew who she was."

Police Chief Thomas Milliette said he couldn't talk about any details of the ongoing investigation, but added that the city's response made him proud to belong to the community. So many FBI agents flew to town to help that the hotel put rollout beds in a meeting room to house them all, a clerk said.

A review of Wilson's criminal history shows he was jailed at least three times and spent a total of 216 days behind bars since 2001, according to the Department of Corrections. The offenses are mostly alcohol related, according to Kotzebue court records obtained by the Daily News.

According to Kotzebue police records, an 11-year-old told his father that Wilson "held him and shook him and tried to force him to drink alcohol" in July 2001.  Wilson denied the accusation at the time but court records show his probation — from an earlier felony burglary charge — was subsequently revoked.

In March 2011, Wilson was charged with fourth-degree assault when his sister phoned police to say Wilson was "trying to beat her up." Wilson pleaded guilty to the charge.

On Tuesday, Wilson appeared before a packed Anchorage federal courtroom facing charges in the Johnson-Barr case.

The audience for the brief hearing filled three rows of chairs and spilled over into the doorway, included a clutch of law enforcement agents in street clothes, a private defense attorney and a sketch artist hired by a local TV station.

Wilson's sister, sitting in the back row, wept as Wilson was led in wearing a yellow jail jumpsuit.

Wilson, a slight man with closely-cropped graying hair, was quiet except to answer questions asked by the judge. He asked to have a public defender represent him.

The judge's order stated Wilson should be held behind bars, in part, because the "weight of evidence against (him) is strong." The defense attorney did not argue for him to be released.

Between a cemetery and a church, Rainbow Park sits along one of Kotzebue's busiest streets.

On Monday afternoon, a half-dozen bicycles lay scattered on the ground as kids raced among the swings and slides. Handmade signs — fingerpaint handprints on purple construction paper — ringed the chain link fence: "We love you Ashley." "I mes you."

Former Kotzebue Mayor Maija Lukin, who is organizing a potlatch in memory of the child, said one parent has begun signing up volunteers to watch the park in shifts. It's the end of summer and everyone in Kotzebue is out playing, taking advantage of the shortening days.

The disappearance could have happened to any Kotzebue child, Lukin said.

Across town, Dena Ferguson, 24, said she took her sons to the school playground instead of Rainbow Park.

"After that incident … we kind of stopped going," she said.

"It was more like an empty feeling that something like that could happen in this little town, where everyone knows each other. And especially to an innocent little girl," Ferguson said.

She has lived in Kotzebue all her life. When Ashley disappeared, she began locking her doors for the first time.