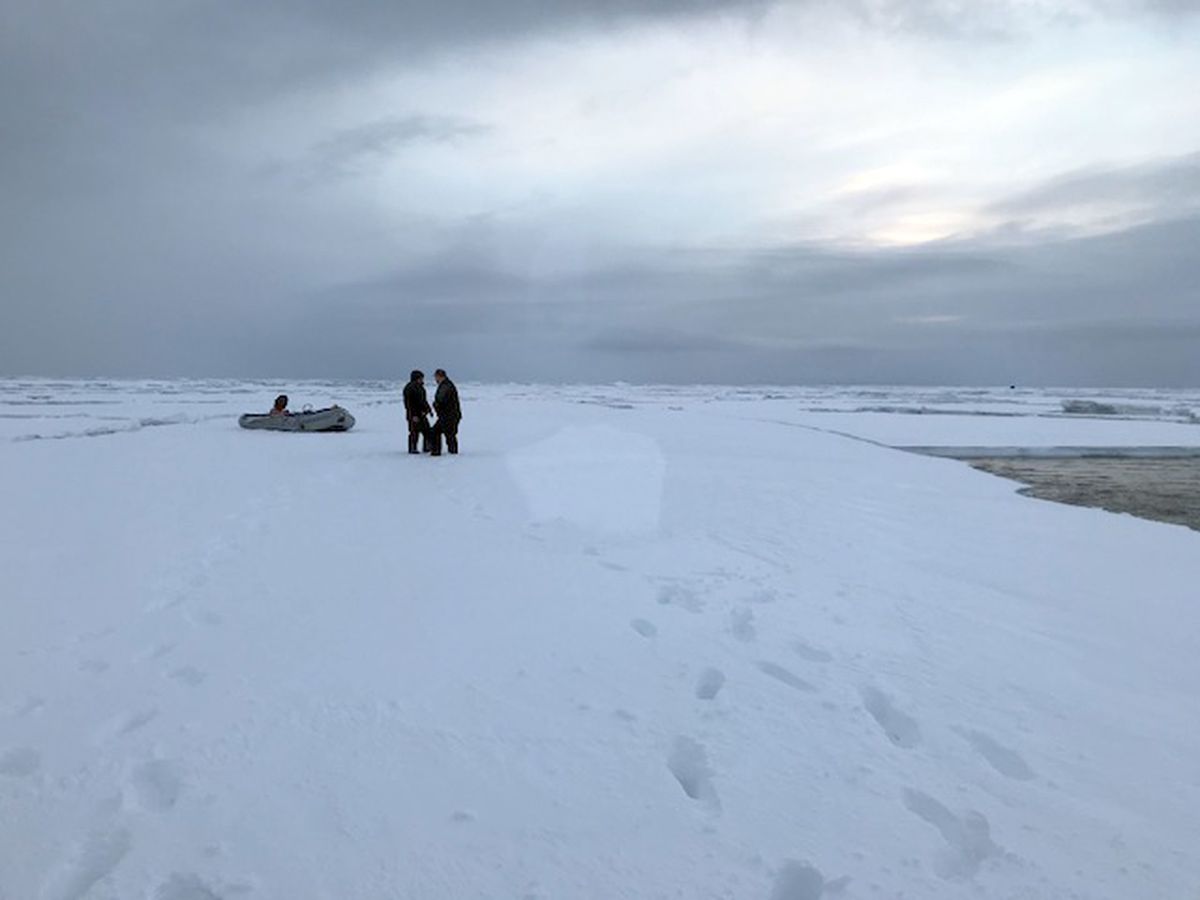 Three men spent hours floating on ice floes off the coast of Nome on Sunday. (Photo by Phillip Rode)

Three men spent hours floating on ice floes off the coast of Nome on Sunday. (Photo by Phillip Rode)

Phillip Rode did not plan to spend his Sunday evening drifting off the coast of Nome on an ice floe.

But he did. And after a helicopter rescue, he is back in Nome and alive and well, ready to tell the tale of the hours he and two other men spent hopping from ice sheet to ice sheet on the Bering Sea.

It all started when Rode, a 45-year-old Nome construction business operator and gold miner who has appeared on the reality TV series “Bering Sea Gold,” volunteered to help a friend recover some offshore gold mining equipment perched on an ice shelf that was beginning to detach from the beach.

“I’ll never turn out fellow miners in need," said Rode. “And I’m not one to say no to an adventure.”

So Rode and two other Nome men, 43-year-old John Culp Jr. and 33-year-old James Gibson, went out on the ice to move the equipment. They’d dug out a skiff out of snowdrifts and were going to use it to load some of the gear in to using leads, patches of open water between sheets of ice, to ferry it back to shore.

The open water alone was bizarre, said Rode: Usually the ice off Nome is solid until early May. People crab and dredge for gold through the ice.

“We never have open water this time of year,” he said. “Usually the ice is 8 feet thick. This year it was only a couple feet thick, not even frozen very hard. It’s bizarre.”

At first, the men tried to round up the pieces of equipment and bring them to a skiff. They were on “a pretty big ice field, big large sheets of ice,” Rode said.

But as they struggled to move the piles of equipment, the ice detached.

Suddenly, they were at the mercy of the Bering Sea currents and winds. But they didn’t know it yet.

“You couldn’t tell we were drifting out to sea,” Rode said. “The horizon line — you couldn’t see it.”

He wasn’t wearing a dive suit or any kind of gear suited for going in the Bering Sea in March, just Carhartts and muck boots. They stood on broad, flat slabs of ice covered in slush — “like walking in a Slurpee,” Rode said.

“We were in open water," he said. "And we could just see endless icebergs. And the boat getting further and further away.”

Then things got worse.

“The ice we were on started breaking into little pieces under us,” Rode said. “It was literally cracking underneath us.”

Rode began jumping from floe to floe, trying to stay close to the other two men.

At one point, he had to take a big leap across the frigid open sea. “I just said now or never,” he said. “And I jumped.”

By the end, he said he was perched on an ice floe no bigger than a Volkswagen Beetle.

The men had no idea whether rescue was forthcoming. But apparently someone had seen them from shore, Rode said.

In the evening, around 6:30 p.m., troopers dispatched a rescue helicopter.

The Alaska State Troopers helicopter hovered overhead, and then landed on a big sheet of ice. Rescuers picked up the men and delivered them back to shore.

They had been adrift on the ice for two or three hours, Rode said.

The helicopter actually landed on the surface of the ice, Rode said. He snapped a few pictures on the flight back to shore, jumbled tiles of white against a black backdrop of ocean. From the helicopter, he realized they’d been miles offshore.

The gear they’d been trying to get — including a few small warming shacks used for mining, a hot water heater and a sluice box — was all lost. He estimates it was worth at least $10,000.

The fact that the men found themselves floating on chunks of ice in open water off Nome in March is astonishing on its own and a testament to historically low levels of sea ice in the Bering Sea, said Rick Thoman, a climate specialist with the Alaska Center for Climate Assessment and Policy at the University of Alaska Fairbanks.

“As far as I know, this is completely unprecedented in the 120 years of Nome’s existence,” said Thoman. “I’m not aware of any time (in the past) when there’s been open water to the beach or no significant sea ice at this point in the season.”

Back in Nome, everyone was physically fine, if cold, Rode said. One of the men moved to Alaska less than a year ago.

“I think there was some shock,” he said. “Which turned into adrenaline later. I couldn’t sleep until 3 in the morning.”

Rode says he and the other men are grateful for the help of rescuers.

“It started out simple and got pretty ugly pretty fast,” he said.