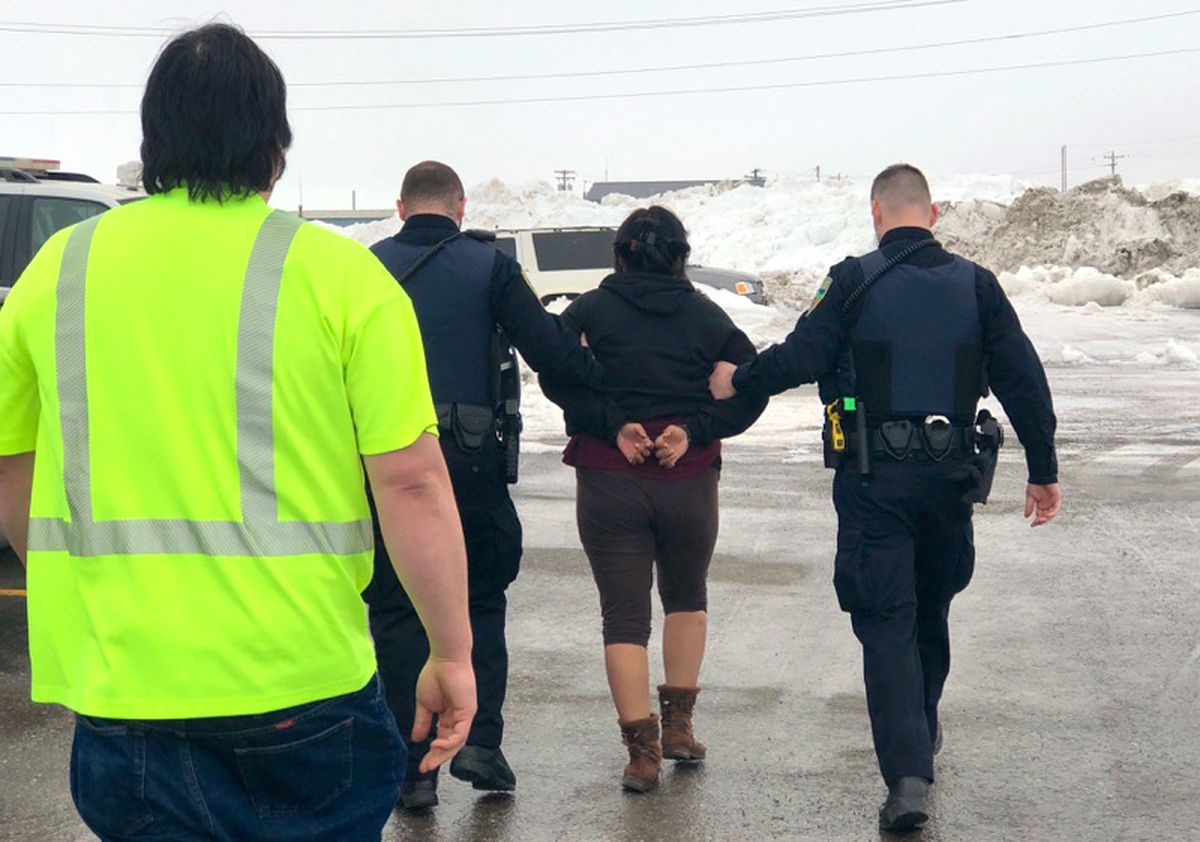 Nome police lead away a woman identified by friends as Brenda Evak after she was arrested Wednesday at the Nome airport during a protest of Gov. Mike Dunleavy's visit. (Photo by Sue Steinacher)

Nome police lead away a woman identified by friends as Brenda Evak after she was arrested Wednesday at the Nome airport during a protest of Gov. Mike Dunleavy's visit. (Photo by Sue Steinacher)

A protester who shouted at Alaska Gov. Mike Dunleavy after he landed at the airport in Nome on Wednesday was arrested by police and led away in handcuffs.

Brenda Evak, 28, was arrested for disorderly conduct at the airport and later released with a court date on Thursday, authorities say. The Nome District Attorney’s Office is still deciding whether to pursue charges.

The governor arrived at the Nome Airport on Wednesday ahead of an afternoon budget roadshow event at Old St. Joseph’s Hall. The event is one of five around the state being sponsored by the Alaska arm of the anti-tax group Americans For Prosperity, founded by the billionaire Koch brothers.

Events already held in Kenai and Anchorage drew protests amid tight security, though there were no reports of arrests.

There’s usually one police officer at the airport, but on Wednesday there were two plus an Alaska State Trooper, said Nome resident Sue Steinacher, who happened to be there as Dunleavy arrived because she was picking up a contract city planner.

Dunleavy and the group with him came off the plane and were milling around, meeting people, when a woman later identified as Evak started shouting in a “very loud, firm voice,” Steinacher said.

The woman was repeating “'What do we do when our lands are threatened? We stand our ground!'” Steinacher said. “She was loud. People could hear her throughout our small airport."

Some people in the airport, including Steinacher, applauded.

“She was very assertive, but continued to back away,” she said, describing Evak as moving back as Dunleavy moved forward.

Police moved in and directed Evak out the door and handcuffed her outside, she said.

She was wearing a hoodie from “Defend the Sacred,” a group that opposes drilling in the Arctic National Wildlife Refuge. Evak works at the Nome Children’s Home, a 10-bed emergency housing facility for children removed from their homes by the state Office of Children’s Services.

Photos of Evak at the airport spread quickly on social media, prompting calls to “free Brenda Evak” and criticizing the arrest of someone choosing to criticize the governor.

In a Facebook post, a friend of Evak’s said she was arrested “for speaking out.” “A young Inupiaq mother getting off the plane in Nome, defending her community, way of life and people. Dunleavy road show at its worst.”

State Sen. Donny Olson, a Democrat from Golovin, criticized the arrest and repeated his offer last week to personally pay for space in Nome for Dunleavy’s town hall, an offer he said was ignored.

“All Alaskans and Americans have the right to free speech,” Olson said in a statement. "It is outrageous that an Alaskan expressing an opinion to the Governor is treated this way. Alaskans are angry, and they feel like their voice is not heard.”

A Dunleavy spokesman directed any questions about the arrest to local authorities.

Nome District Attorney John Earthman said he wasn’t at the airport Wednesday, but that it appeared Nome police decided to arrest Evak in the interest of public safety. No one from the governor’s office or Americans For Prosperity was involved in the decision.

Earthman is still weighing whether to charge Evak, a decision he said will be based on the circumstances of the arrest and her record, which is relatively clear.

“She’s not someone I deal with on a regular basis,” he said. “That certainly weighs heavily in her favor.”