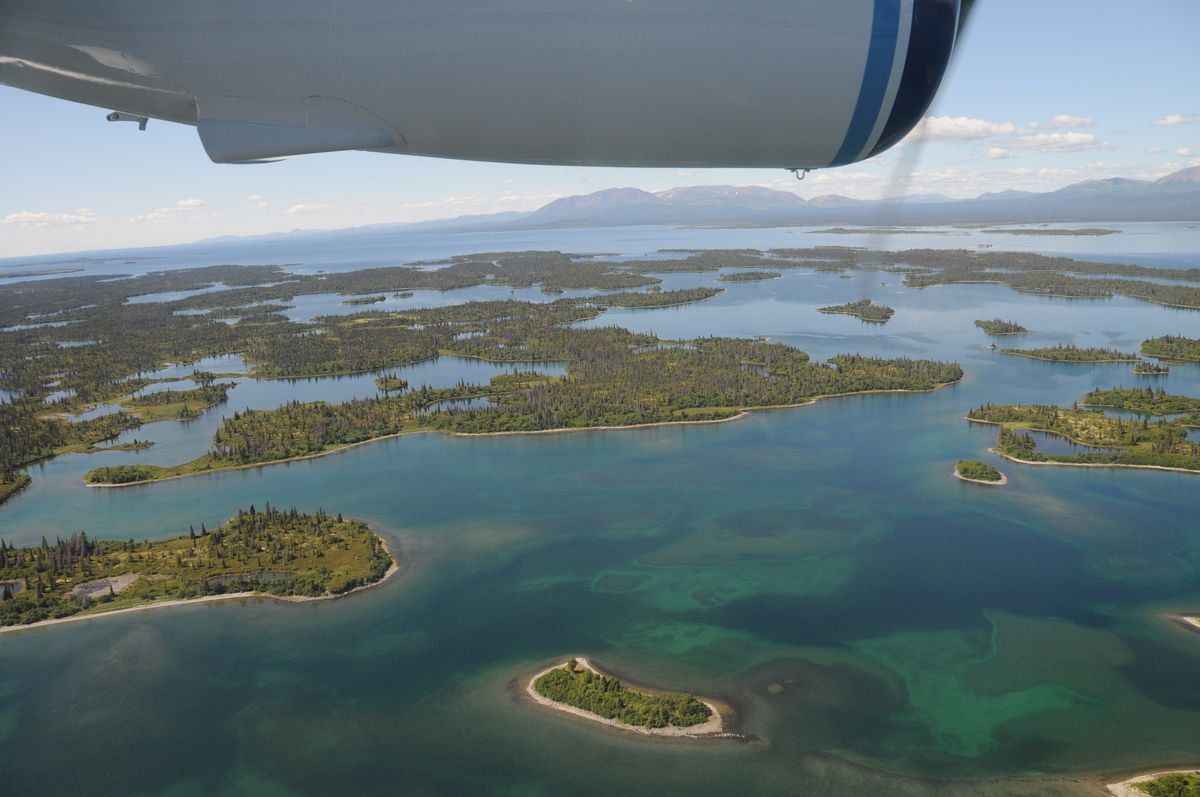 The mysterious animal that people say they see in Iliamna Lake is dark, longer than 15 feet, with a long head and tail and distinct fins. It isn’t a whale or a seal, and it often vanishes quickly.

Fishermen have tried hooking it. This newspaper once offered $100,000 for proof of its existence. But so far, nobody has photographed the creature some call the Iliamna Lake monster.

Palmer resident Bruce Wright, a former marine ecologist with the National Marine Fisheries Service, hopes to solve the riddle once and for all this summer.

He plans to sink an underwater video camera to the bottom of the sprawling and sparsely populated Southwest Alaska lake that’s the largest and one of the deepest in the state.

People call Iliamna Lake an inland sea. It’s 80 miles long, with a rare population of freshwater harbor seals that scientists believe moved in from the ocean long ago, and an old legend that something large lives in its 1,000-foot depths.

The TV series “River Monsters” featured it in 2010, piquing Wright’s curiosity and sparking his personal quest to find the animal. He was skeptical until two years ago, when a friend who put out baited hooks to catch the creature reported that something very big had shredded his fishing gear.

“This could lead to an exciting new discovery,” said Wright, senior scientist with a regional Aleut tribal organization.

Residents from lakeside villages say these are no imaginary tales. The observations over the years are often consistent, of huge aquatic creatures, often shark-like in appearance.

“It’s just part of life out here,” said Gary Nielsen, owner of the general store in Kokhanok and a longtime fisherman. “A lot of old-timers refuse to travel on the lake because of it."

Two years ago, he and other village residents saw what looked like a group of creatures swimming on the surface for a few seconds. They were about a mile away when he spotted them through binoculars. The longest was very large, maybe 65 feet long, he said. Others were slightly smaller.

“They were gigantic" but didn’t appear to be whales, he said. “I have no idea what we saw.”

There could be plausible explanations for some sightings, said Forrest Bowers, a biologist with the state’s commercial fisheries division.

Beluga whales following salmon up the Kvichak River from the Pacific Ocean, he said. Or maybe it’s the seals, appearing extra-large because of visual distortions.

Then again, who knows.

“It’s a big lake,” he said. “And there are likely things we don’t know about big lakes like that.”

Wright believes the animals are large sleeper sharks that can grow 20 feet long and far outlive humans — like their better-studied cousins, Greenland sharks, the planet’s longest-living vertebrate that can remain alive more than 300 years. They’re somehow visiting or living in the freshwater lake. Some believe it’s sturgeon. Those can grow 20 feet long.

“There’s definitely something down there," and it’s big, said Mark Stigar, a retired colonel and former chief aviation officer for the Alaska Army National Guard until 2003.

Stigar, who owns a summer house in Iliamna, offered five years ago to help Wright find the animal — by occasionally fishing for it.

Stigar didn’t think he’d find anything unusual. But one day in July 2017, he and his brother-in-law pulled up the heavy-duty, 200-foot longline they’d stretched across the lake bottom after baiting 14 hooks with salmon heads.

A big 4-inch, stainless-steel snap was gone, along with the thick, nylon-braided cord holding the hook. Another metal snap was bent. One nylon cord was “sawed” in two, a second hook missing.

“The cord was abraded in two spots," Stigar said. “It had been cut with animal’s teeth.”

A 38-pound anchor set on the lake bottom to hold the longline was dragged some 50 yards, based on GPS measurements when it was dropped into more than 100 feet of water, he said. The line was "tangled into a messy ball.”

He doesn’t believe the damage was the work of the seals — the ones he’s seen are too small — and the line was too deep for a boat to hit it.

“At that point, I decided I don’t want to catch the thing anymore, because there’s truly something here," Stigar said. “And if it is a sleeper shark, it may be the oldest living creature on the planet.”

Sean Brennan, a University of Washington researcher who studies the lake’s seals, said he wouldn’t rule out a “clever, determined” seal as the culprit. They eat salmon and one reportedly weighed nearly 200 pounds.

“I don’t know,” he said. “These seals are really strong swimmers, and they definitely have sharp teeth.”

In 1959, Sports Afield magazine reported that something had ripped away tackle as a group fished for the animal, snapping a stainless-steel cable “like it was thread” and snatching moose-meat bait.

But why haven’t carcasses of odd creatures turned up dead along the lake? Why aren’t there any known pictures of the animal?

In 1980, the Anchorage Daily News offered $100,000 over five months for tangible evidence, and scientific verification, that a creature unknown to science lived in Iliamna. The award would be worth more than $300,000 today. Nobody won.

Robbin La Vine, an Anchorage anthropologist, said she and a colleague got a good look at an odd creature in summer 2008 as their water taxi flew low over the lake on a clear, calm day. It looked like a grayish fish maybe 15 feet in length, with a long head, prominent tail and fins on its side, swimming in shallow water.

“It was kind of twisting, like stirring up the sandy bottom,” she said. “At first I thought it was two seals twisting, but then I realized it was one animal. It was definitely more fish-like than whale-like.”

Tim La Porte, owner of Iliamna Air Taxi, vividly remembers seeing it in July 1977 as he and passengers banked near the lake’s surface. The group spotted something very fish-like for a few seconds, maybe 15 feet long based on the size of a nearby skiff.

“It arched its back and hit the water, which was glassy calm, and this wake radiated out from the great big splash,” he said. “We saw a great, big tail going sideways, back and forth, going down."

“I don’t believe it’s a whale, and it didn’t act like the seals we’ve seen for years, so who knows,” he said.

Wright said this June he plans to lower what will be the first deep-water video camera used to find the animal, part of an $8,000 system he purchased.

Stigar has volunteered to operate it.

Wright says he’ll collect water samples in search of DNA. Scientists with the U.S. Geological Survey have offered to help identify sleeper sharks or other known animals that might be in Iliamna, Wright said.

“If we see a new species, that would be pretty fascinating,” Wright said. "And if I find a sleeper shark, that’s worth the effort too. There will be plenty of questions about why they’re there and how do they make a living.”