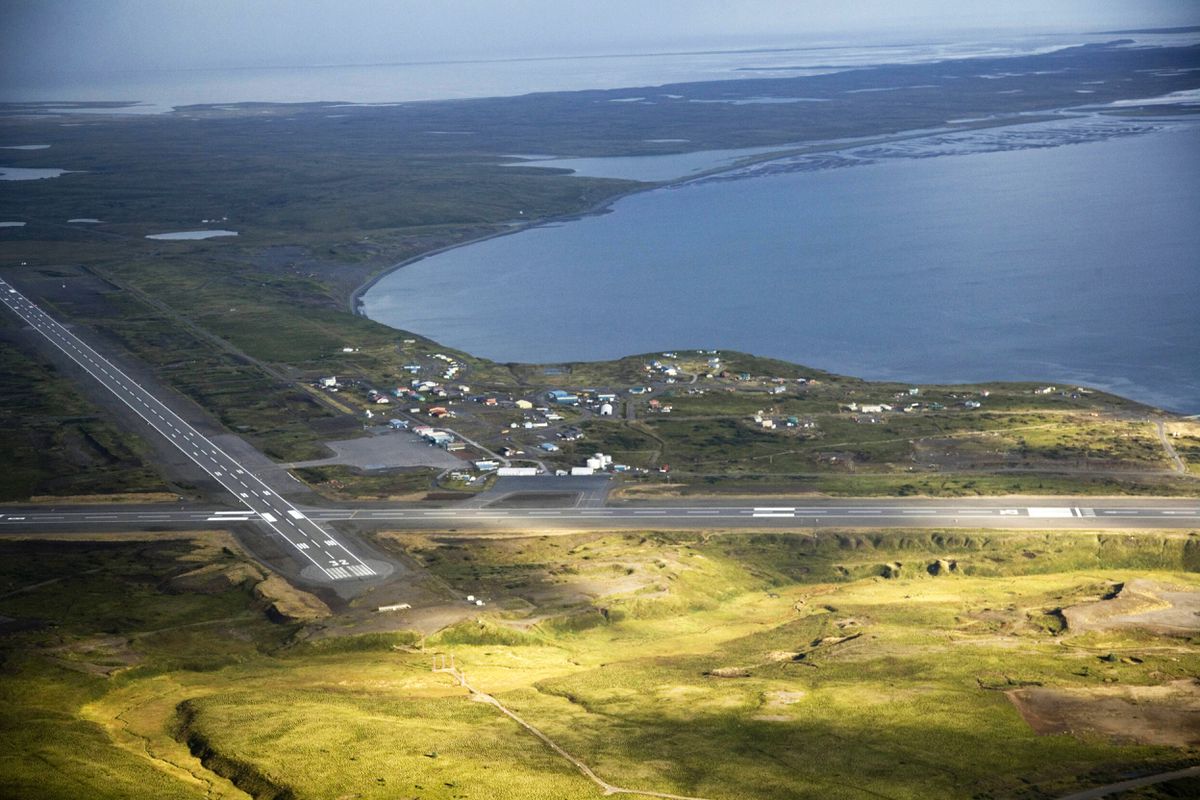 The runways at Cold Bay. (U.S. Fish and Wildlife Service)

The runways at Cold Bay. (U.S. Fish and Wildlife Service)

A new land exchange agreement aimed at constructing a road through Izembek National Wildlife Refuge has been signed by an Alaska Native corporation and the Interior Department, village community leaders announced Wednesday.

The exchange would trade land owned by King Cove Corp. for property of equal value in Izembek National Wildlife Refuge, an internationally recognized habitat for migrating waterfowl near the tip of the Alaska Peninsula.

King Cove spokeswoman Della Trumble said the exchange could lead to a long-desired land route to Cold Bay, which has an all-weather airport and access to emergency flights.

Environmental groups strongly oppose a road for the precedent it would set and for the harm to brown bear, caribou, salmon and seabird habitat. The U.S. Fish and Wildlife Service in 2013 concluded that a road would cause irrevocable damage to the Izembek watershed, but Interior Secretary David Bernhardt in a statement said the needs of King Cove residents were more important.

"I choose to place greater weight on the welfare and well-being of the Alaska Native people who call King Cove home," Bernhardt said in an email response for comment. "It is not a decision I take lightly, it is one that I believe best serves the public interest, my responsibilities, and humanity."

A road would split an isthmus as narrow as 3 miles on the southern border of the lagoon.

However, U.S. District Court Judge Gleason in March ruled that Zinke had acted illegally. She said an agency may not simply discard prior factual findings without a reasoned explanation.

King Cove spokeswoman Della Trumble said the land trade would be similar to three other exchanges in which the U.S. Fish and Wildlife Service swapped land with three village corporations within the Yukon Delta National Wildlife Refuge.

The proposed one-lane gravel road of about 12 miles would hook into historic military roads within the refuge, Trumble said. King Cove flights are grounded by dense fog, high winds or storms 30% of the time, she said. Since 2014, 101 emergency medical evacuations have taken place, including 21 by the U.S. Coast Guard, she said.

National environmental groups say the safety issue is a smoke screen to create a road that would eventually be opened to commercial traffic.

"The Trump administration is obsessed with bulldozing a road through one of the most important wildlife refuges on the planet, said Randi Spivak, public lands director at the Center for Biological Diversity, in a prepared statement. "This spectacular public land is irreplaceable and we'll keep fighting to ensure it remains protected."

Congress in 1997 addressed the King Cove transportation issue with a $37.5 million appropriation for water access to Cold Bay that included a $9 million hovercraft. The Aleutians East Borough, the regional governing body, took the vessel out of service after deciding it was too expensive and unreliable.

Jamie Rappaport Clark, president and CEO of Defenders of Wildlife, said the federal government has spent more than $50 million to upgrade access to quality medical care King Cove and the road would cost $30 million more.