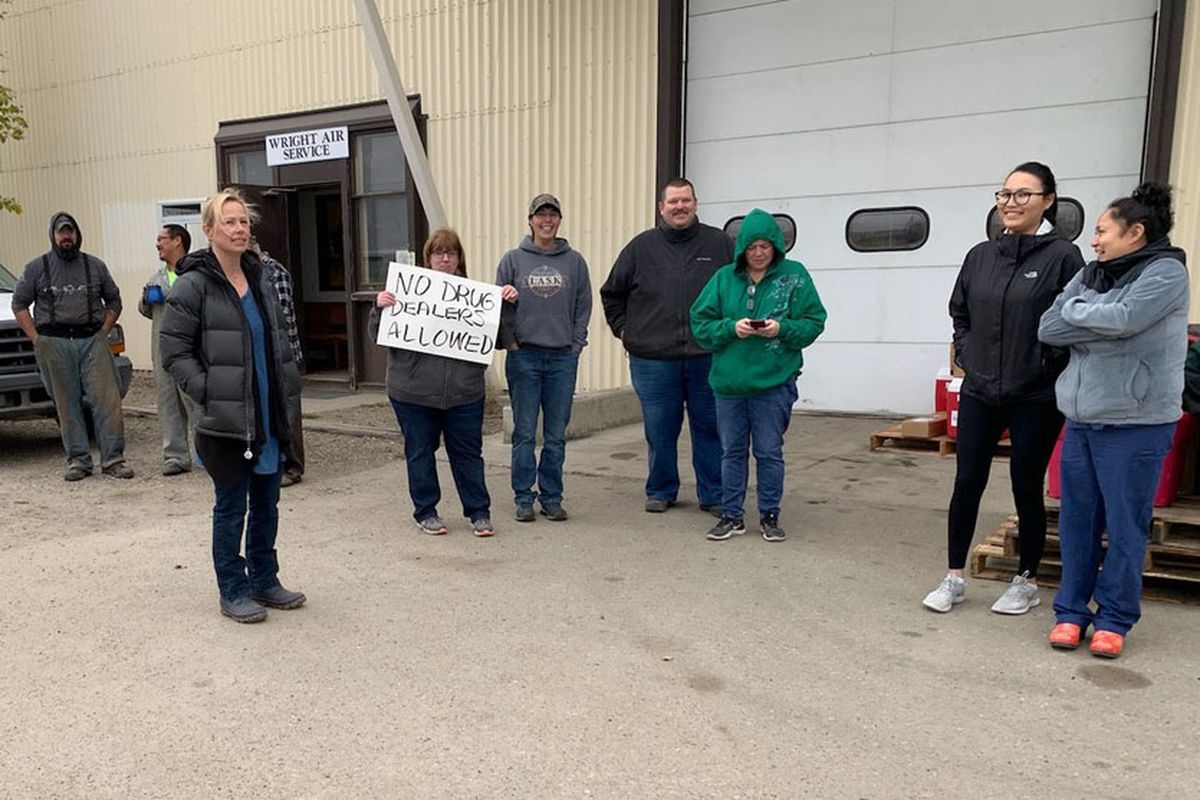 Dozens of residents of Galena gathered at the airport on Wednesday, Aug.28, 2019 and gave a suspected drug dealer who had just landed a choice. (Photo provided by Cynthia Erickson)

Dozens of residents of Galena gathered at the airport on Wednesday, Aug.28, 2019 and gave a suspected drug dealer who had just landed a choice. (Photo provided by Cynthia Erickson)

A crowd of about 40 protesters fed up with illegal drug use in their Alaska village gathered along the Galena airport runway on Wednesday and presented a choice to a suspected methamphetamine dealer who had just landed, residents said.

Young and old showed up for the demonstration. A woman held a written sign: “NO DRUG DEALERS ALLOWED.” A man threw on black clothes and led a black dog by a tight leash, to look the part of a drug agent ready to board the small plane.

A village resident chosen as a spokesperson climbed aboard and discreetly delivered the message: Stay in the village and have every move scrutinized. Or, leave town and we’ll cover your ticket home.

The woman chose option two, and never left the plane.

It marked a victory for an Interior village trying to keep out drugs, but with few options for doing so, said Nolan Aloysius, mayor in the community of 475.

Everyone knows who the dealers are, but it’s hard to stop them, he said. Without evidence or probable cause, the city police officer and Alaska State Trooper, who were off that day, are limited in what they can do, he said.

“This was a general feeling of accomplishment and people were proud to be part of it,” he said.

Concerned about a spike in young people using meth or other illegal drugs, more than 50 residents recently held a town-hall meeting in search of a solution, Aloysius said. They knew a big potlatch that started Thursday, honoring deceased relatives from several families, would attract smugglers.

They vowed to confront suspected dealers en masse. They’ll meet them at the airport and along the Yukon River when they step off boats. And once winter comes, they’ll meet them on trails when they arrive by snowmachine.

So when someone in a downriver village on Wednesday phoned residents in Galena to say a suspected dealer was headed their way, they threw their plan into action.

“People started calling, texting each other, and word went out fast,” Aloysius said. “Everyone took time from their jobs, ran over to the airport and made their presence known."

About 40 people raced to the airport in all, though the plane arrived early, said Cynthia Erickson, a Tanana resident visiting family and working in the village. She helped make the sign.

The mayor, who is also the village agent for the airline, Wright Air Service, allowed one person to enter the plane to present the options. He peered inside the cabin as she did so. The visitor suspected dealer chose to leave in a matter of seconds, he said.

“Unless you decide as a relative or family member to approach these people and say, ‘You stay away from our families and from our children,' this won’t change,” said Erickson, who runs a program in Tanana to fight child abuse, neglect and suicide.

She posted about Galena’s protest on Facebook, generating gobs of (mostly) positive comments.

“Now this is what it’s gonna take to protect our villages and stand up for our children!!!" she wrote, encouraging other villages to follow Galena’s path.

It didn’t hurt that one man at the airport arrived in black, his black Labrador retriever at his side.

Martin Hornfischer, a missionary at Galena Bible Church, purposely threw on the black sweater after he got a text about the incoming plane. He made sure to grab Yuki. The black Lab has experience “licking people to death," not drug interdiction, he said.

He and Yuki stood near the plane as the spokesperson entered the cabin. The drug-agent-like ensemble might have helped the woman make up her mind, Hornfischer said.

But it was a small part of the message.

“Everyone there communicated that the whole village has a problem with drugs,” he said.