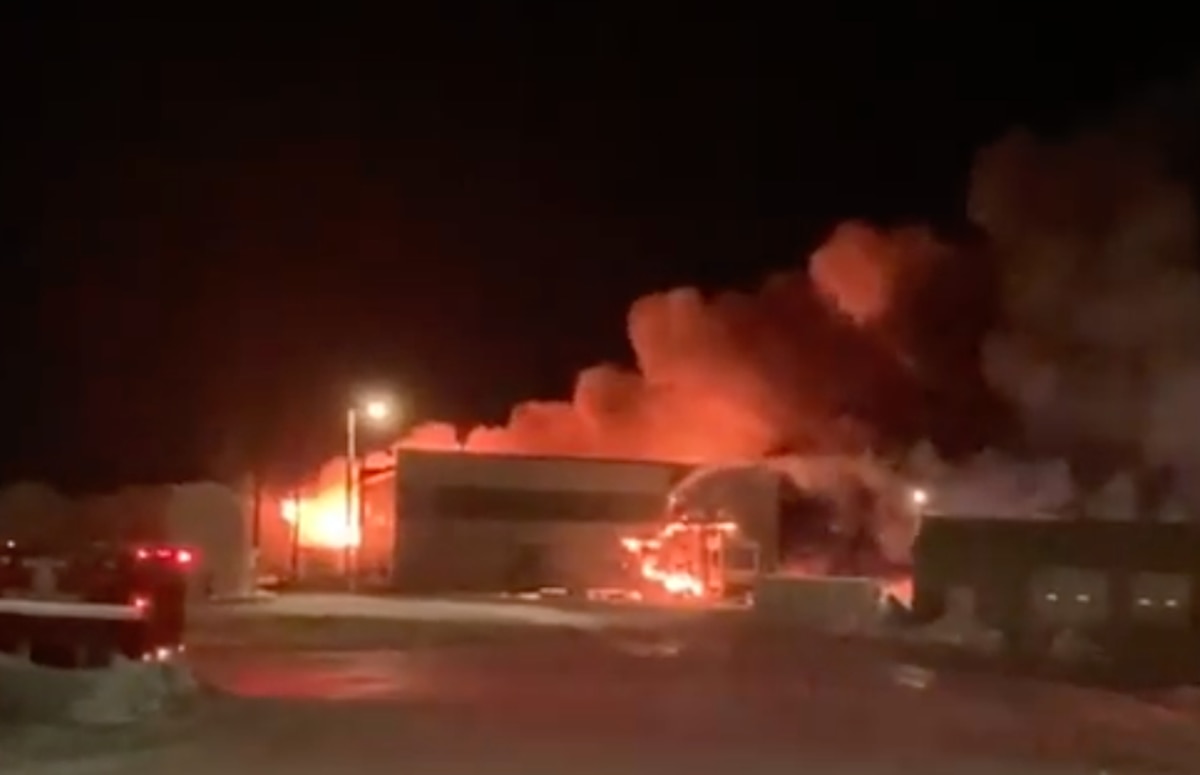 A fire that spread Friday through a school in Kaktovik, on Alaska’s North Slope, destroyed much of the building in frigid cold conditions that hampered firefighters. Nobody was immediately reported hurt.

The fire at the Harold Kaveolook School was under control and almost out on Saturday afternoon, according to a statement from D.J. Fauske, a spokesman with the North Slope Borough.

“The rubble is smoldering but does not pose a significant risk of reigniting, at this time,” the statement said.

Overnight temperatures in the village dipped to minus 35 with windchills to minus 63, and a windchill warning was in effect for the eastern Beaufort Sea coast through Saturday morning.

The cold caused firefighting equipment, like hoses and tanks, to freeze as first responders tried to use them, residents said. They had to be thawed and closely monitored throughout Friday morning as crews worked on the blaze.

Please pray for my village of Kaktovik. Our new gym is gone. Fire is spreading to the only school we have. Freezing temps, local firefighters trying their best to fight the fire. Equipment & hoses, air tanks keep freezing. February 7, 2020 3am pic.twitter.com/3OetBKPhK9

A crew from the hub community of Utqiagvik flew to Kaktovik to help local teams fight the fire in the early morning hours Friday.

Leroy Stigen, maintenance manager at the school, said the community is stunned.

“It’s the heart of the village,” he said. “Everyone is still numb at the moment.”

“We were trying to unthaw” the pipes, he said. “That what we think it is. But we really don’t know."

Alaska deputy fire marshals were flying to Kaktovik on Saturday in order to investigate the cause of the fire and how it started, Fauske said in his statement.

A community meeting for Kaktovik was scheduled for Saturday afternoon.

Teachers and others from the school were displaced after losing power but had alternate housing Saturday, the statement said.

Borough Mayor Harry Brower Jr. on Friday morning called the fire a tragedy for the village, which has about 250 residents.

“Currently, we do not know the cause of the fire but we do know the school was evacuated quickly,” Brower said in a statement.

Kaktovik Mayor Amanda Kaleak said portions of the school were still burning when she drove by the school shortly after noon Friday.

“What was wood is collapsed. There’s tin. It’s piles of metal. There’s still flames,” she said at the time.

She said she grew up at the school and graduated in 2005. She works as a secretary there.

“There are a lot of memories,” she said. “And I have three girls in school there. It’s just devastating to them."

Much of the community, including herself, helped firefighters through the night. She lost personal items and important paperwork she can’t replace.

“It’s a loss for the entire community,” she said. “I’m just happy no one got hurt, and everyone stayed safe.”

The state senator for the North Slope region, Donny Olson, said on the Senate floor Friday that the middle and high school sections of the school were destroyed.

“I’m told the middle and high school wings have burned down to the ground and that the old and new gym have been heavily damaged by fire, as well as the library and shop area, which were still burning as of an hour ago,” he said.

Firefighters were able to protect the elementary wing and teacher housing.

“It was intensely difficult to go ahead and fight this fire, let alone save any of the portions that were there,” he said. “They’re extremely blessed to have saved anything that was out there.”

The nearest school is more than 150 miles away, Olson said. The Kaveolook School has about 60 students.

He said the preliminary plan is half-days of school at the community hall, with the upper and lower grades attending at different times. School will be held on weekends as well.

“The impacts are far and wide,” he said.

Fauske, with the borough, said school district and borough technicians are assembling “a tech package with servers, laptops and the necessary equipment. Weather and tech issues permitting, we are hopeful that the temporary space and equipment will be ready for classes Monday morning."

Borough officials are working on an action plan to address the fire and short- and long-term consequences for the village, said Chief Administrative Officer Forrest “Deano” Olemaun.

“Cold temperatures are not helping,” he said. “Besides local authorities, search and rescue got there quickly and we are sending additional borough resources and staff as soon as we can.”

Bruce Inglangasak, a polar bear guide in the village, said his 22-year-old daughter, Tori, saw smoke at the school and heard an alarm blaring Thursday night before crews arrived. It seems to have started around 10:30 p.m., he said. His daughter called the fire department to alert them about the fire, he said.

Kaktovik residents shared pictures of the fire on social media. They show the school with a large plume of smoke coming from it, glowing orange against the night sky.

Alice Faith Aishanna said she was Class of ’86.

“I still can’t believe it,” she said.

The school was more than 50 years old. Early on it had just two rooms, the high school on one part and lower grades on the other.

Firefighters were able to save that original part of the school, she said.

“I’m very, very thankful for that,” she said.

The school grew over the years. It had a “short-court” gym for decades, she said.

“We finally got this new addition only like three or four years ago and it was the most awesome gym in the world,” she said, with a weight room and track upstairs. “We couldn’t believe we finally the got new regulation sized-gym. And now it’s gone.”

In a village like Kaktovik, the school plays a central role. It’s not just where students go to learn, it’s a gathering place for extracurricular activities and community events.

“I’m in shock and disbelief even though I see the videos and pictures,” said Kaktovik teacher Flora Rexford, who was in Atqasuk when the fire started. “So many memories, so many. I will never get to walk the halls or get to replace what has been lost. (I’m) so glad there’s no one hurt, but I grew up in that school. It’s my life and my home.”

Schools in villages often serve as the repository for community’s accomplishments over the years. In Kaktovik, locals lamented the loss of precious pieces of local artwork and awards.

"We lost so many irreplaceable artifacts, including two huge mural paintings that were painted by students back in the 1980s, including an image of an Inupiaq girl painted by my mother," said Katheryn Aishanna, who is the daughter of Alice Faith Aishanna.

“Our school awards trophy case is gone, full of years (of) past memorabilia. Hanging in our old gym were many banners for highest attendance awards, our regional first place basketball banners (and more).”

The school’s basketball team, the Kaktovik Rams, was supposed to hold its first home games of the season this weekend during a village tournament. Frozen pipes in the school force the moving of the games to Atqasuk.

The North Slope Borough is a tight-knit region, with close connections among its many communities. Residents in other villages watched the news of the fire and sent words of support to Kaktovik.

“Our schools in our villages are more than a place to learn,” wrote Anaktuvuk Pass resident Nasugraq Rainey Hopson on Facebook. “It is where we hold celebrations and feasts, and is an emergency shelter when things go wrong. It’s also where the library is and where sports happen. This is such a huge loss for this community. Such a heavy heart for Kaktovik this morning.”

First and foremost, our thoughts and prayers go out to the community of Kaktovik. Currently, we do not know the cause of the fire but we do know the school was evacuated quickly and the fire department is still on site working hard to contain the fire that was reported around 3:00am earlier today.

As I write this, our brave first responders, including volunteers, have spent hours battling the blaze. We are so happy to report, no injuries or loss of life has been reported at this time.

Like in all our villages, the school plays a central role for many. It's not just where our students go to learn and play sports, but is a gathering place for town activities and community events, senior citizen lunches, and a place for exercise and social gathering of many kinds.

The current weather can make containing fires challenging, and evening temperatures in Kaktovik dipped to minus 35 with windchills to minus 60-65.

Again, our thoughts and prayers are with you Kaktovik in this tragic and difficult time. It is the bravery and service of your fire department and first responders that shines hope and courage into the heart of your community. Thank you for all that you do and please know that every Borough resource will be made available as we all stand united, to deal with this latest tragedy.