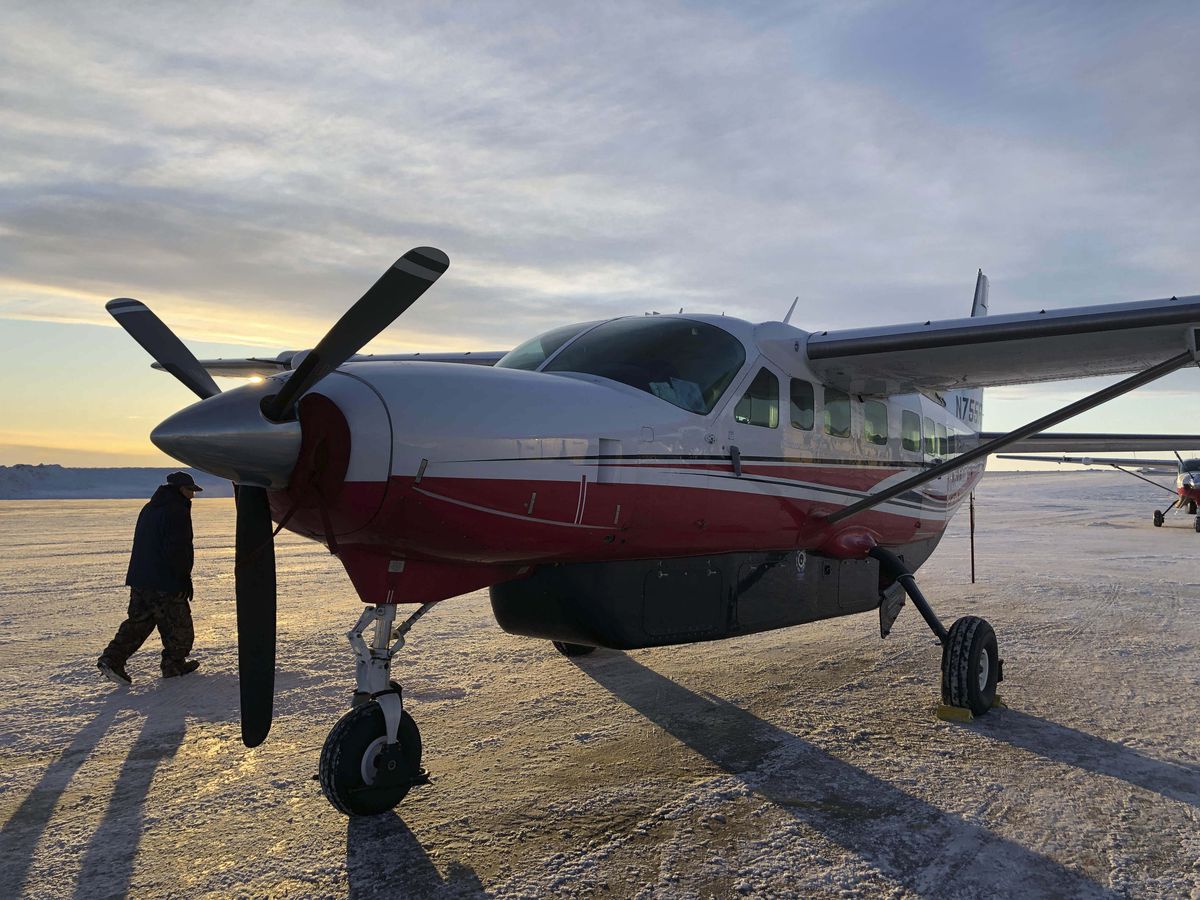 This Jan. 18, 2020, photo shows people preparing to get on a Ravn Connect airplane at the airport in Bethel, Alaska, for a flight to Toksook Bay. The abrupt shutdown of RavnAir Group sent community leaders, the U.S. Postal Service and other local carriers scrambling to help get needed freight to remote Alaska villages. (AP Photo/Mark Thiessen, File)

This Jan. 18, 2020, photo shows people preparing to get on a Ravn Connect airplane at the airport in Bethel, Alaska, for a flight to Toksook Bay. The abrupt shutdown of RavnAir Group sent community leaders, the U.S. Postal Service and other local carriers scrambling to help get needed freight to remote Alaska villages. (AP Photo/Mark Thiessen, File)

In April, in the midst of the COVID-19 pandemic, Atqasuk’s tribal coordinator Millie Frankson received word that the grocery order she was counting on wouldn’t be delivered to her remote Arctic village.

To get her $535 worth of food, she would have to drive two hours on a makeshift road across the ice to reach a cargo storage facility in Utqiagvik, where her purchase remained.

"I was lucky enough that the ice road was still open," she said.

The unexpected trip was due to the abrupt shutdown of Alaska’s largest regional airline, RavnAir Group, which on April 4 announced it had filed for bankruptcy, citing the “COVID-19 pandemic and the unprecedented loss of 90 percent of passenger revenue.”

The airline halted all service with only a few hours' notice, leaving people in the more than 115 Alaska communities it served with little to no time to make other arrangements. Nearly all of them are accessible only by plane or boat.

In the days that followed, community leaders, the U.S. Postal Service, and other local air carriers scrambled to ensure essential freight would reach Alaska's remote villages and passengers could get where they were going.

"I was impressed with the leadership, and just how adaptable we were in a couple days," U.S. Postal Service representative David Rupert said of the combined effort.

The sudden closure exposed vulnerabilities in a supply chain that relies heavily on air travel to deliver everything from building supplies and car parts to bananas, baby food, laundry detergent and mail to hundreds of communities.

"(Ravn's closure) hit the North Slope really hard," said Frankson. "It was just a big shock to the whole North Slope Borough. Like, how are we gonna get our food, our mail, our medical needs?"

Air service is vital in Alaska, where about 82% of communities lack road connections, according to the state's transportation agency. But the pandemic has limited travel and flights in the state, forcing some air carriers to manage increased loads.

Villages are taking steps to prepare in response to the uncertainty.

The Native Village of Deering has been providing additional fuel and ammunition for subsistence use, so residents can hunt for caribou and ptarmigan if cargo shipments are delayed.

Similarly, the Organized Village of Kake recently requested emergency permits to hunt deer and moose out of season, after their grocery shipments didn't arrive on schedule.

Frankson started devising a plan to get the food she'd ordered from an Anchorage store to her Atqasuk home soon after getting word that "completely out of nowhere," Ravn Air had shut down.

Such orders already face a long journey to the village of 300 people. Another airline, Northern Air Cargo, carries them the 900 miles from Anchorage to Utquiagvik. But Northern's planes can't land at Atqasuk's small runway, so the food is transferred to Ravn for the last 60 miles.

Northern Air Cargo still had access to Ravn's cargo area the day Ravn closed, so Frankson called her sister to pick up the meat package during business hours.

"Me and my other half drove on the ice road. It took us two and a half, three hours to drive and get our food. So we lucked out."

Frankson was worried others may have had fresh produce, fruit and meat still sitting at Ravn.

Almost all of the communities served by the airline are accessible only by plane or boat. For about 20 villages, RavnAir was their sole air service provider.

"(Ravn) had a very big footprint, and when a large, strong carrier goes out of business in just a short period of time - and closes that many stations and discontinues that many flights - it's very disruptive to a small market," explained Rob Everts, president of Everts Air Cargo, an airline company based in Fairbanks.

Filling the gap in service was a logistically complicated process that involved about a half-dozen other local carriers, including Grant Aviation, Ryan Air and Everts Air Cargo. The state's various regions can be vastly different from one another in terms of weather, geography, population and demands.

While essentials are now reaching their intended destinations, the air carriers and villages are still adjusting to the changes caused by the coronavirus and the Ravn bankruptcy.

In Alaska's new normal, flights don't come as often or as reliably as they once did.

There are fewer jet flights from Anchorage or regional hubs to smaller villages. Scheduling is more difficult, and trips can take longer. With fewer flights available for passengers, villagers are troubled that they cannot travel to do household shopping.

Also, some air carriers are having to take on much larger loads while still ensuring they have the necessary equipment to do so safely.

“I’ve been amazed at our team, at how well they’ve adapted to move the kind of mail we’ve needed to,” said Rob Kelley, president of Grant Aviation, which serves communities throughout Southwest Alaska, an area slightly larger than California.

It's been helpful that fewer people have been traveling due to social distancing orders. This has enabled the carriers to focus on cargo delivery for the time being.

However, there will be new considerations when passenger travel starts to open up again.

"How do you maintain the whole social distancing while you have to get in a small airplane and fly to a larger community to grocery shop, and then when you get there, inventories are down and groceries that you might have needed are gone?" asked Alice Ruby, mayor of Dillingham.

Questions also remain about what flight prices, routes and schedules will look like in the altered aviation landscape.

"I think when the passengers start moving again, what they will see is pretty reasonable transportation service, but it won't be with the frequency that they enjoyed in the past. And if it's a one-time flight here and there, the pricing isn't necessarily gonna be the same," said Everts, of Everts Air Cargo. He believes the recent events could have lasting effects for people who live in remote Alaska.

The state's aviation community seems committed to working through the changes. This week, several stakeholders met for an Aviation Advisory Board Task Force Meeting to discuss the issues.

“Being an Alaska Native-owned (airline) company, just serving our people is the baseline of everything,” Ryan said. “You conduct good business, but you keep the focus on the people and ensure that their needs are met. And then everything else should fall into place.”