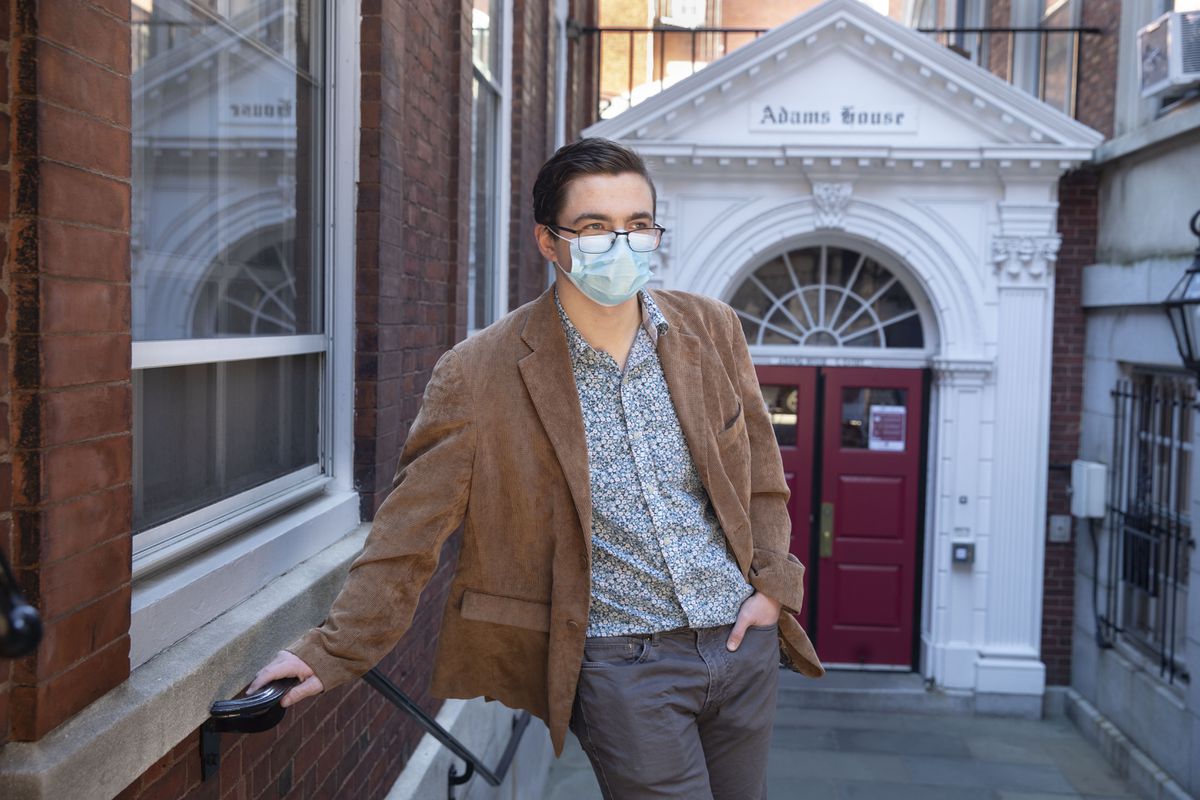 Wilfried Kuugauraq Zibell, Harvard University Class of 2021, was selected to receive a Rhodes Scholarship and is photographed here at the entrance to Harvard's Adams House. (Kris Snibbe / Harvard staff photographer)

Wilfried Kuugauraq Zibell, Harvard University Class of 2021, was selected to receive a Rhodes Scholarship and is photographed here at the entrance to Harvard's Adams House. (Kris Snibbe / Harvard staff photographer)

Next fall, Noorvik’s own Wilfried Zibell will head to the University of Oxford in England to study colonization and its economic impacts on subsistence economies in rural Alaska.

Zibell was recently selected to be a Rhodes Scholar from nearly 1,000 applicants across the United States. The Rhodes Scholarship, one of the most selective in the world, is an international postgraduate award for students to study at the University of Oxford.

“I don’t think my feet have touched the ground” since the announcement, Zibell said in a phone interview with The Sounder.

A senior at Harvard University, Zibell grew up in the roughly 650-person town of Noorvik. Though not Iñupiaq, he was raised hunting, trapping and fishing alongside his community members.

At Harvard, the 21-year-old has studied comparative literature between Yiddish and Iñupiaq works. His self-guided curriculum has involved literary analysis of Iñupiaq poetry, such as the work of King Islander Joan Kane, and the traditional stories of the lore of the Iñupiaq, he said.

At Oxford, Zibell said he hopes to move from a literary look at colonization into an economic and historical analysis of its impacts on subsistence living, language and culture.

“If we look at the ongoing effects in a very practical sense … so few people, especially in my generation, (are) fluent in Iñupiaq, and there aren’t a lot of incentives to become fluent,” he said. “Everyone I know cares deeply about the culture and the language and everyone cares about maintaining tradition, but the simple fact of the matter is that life in the village is becoming more difficult and people are (moving) to Anchorage because of a lack of opportunity in the village.”

By examining historical factors that shaped the economics of rural Alaska, Zibell hopes to gain an understanding of how to reclaim self-sufficiency in the bush.

“A key aspect in how to move forward is understanding how we got here,” he said.

Zibell said the award belongs in equal part to the community that raised him.

“This work is only good for anything in as much as it benefits home,” he said. “I’m only here because of the work of other people in the village that lifted me up.”

Community member Tammy Wells, a teacher’s aide at the Noorvik Aqqaluk School, described a young Zibell — “Billy” — as a positive kid with a can-do attitude. She said she knew Zibell was going to be brilliant as early on as elementary school.

“He was an all-star,” Wells said of the student. “He had a gift in reading. Come second grade, he was reading thick books like ‘The Hobbit.’ ” Wells added that she relied on Zibell as “the dictionary” because classmates knew to seek help from if they didn’t know the meaning of a word.

In high school, Zibell continued advancing his passion for education when he served on the Alaska State Board of Education helping set policy statewide.

Alaska’s education commissioner, Michael Johnson — who joined the department while Zibell was serving on its board — said Zibell is uniquely qualified to do the work he’s setting out to do at Oxford.

“He grew up in an environment not many people grow up in,” Johnson said. “I am so thankful that one of our students, especially from rural Alaska, demonstrates to the rest of the world and our country that students in rural Alaska can, and do, get a good education and they have a very valuable contribution to make to public policy in our country. Wilfried demonstrates that and represents all of us in that role.”

Zibell said he hopes his achievement inspires other rural Alaskans to aim high.

“There’s definitely a sort of perception that you get a lot growing up in the village, that people from the village couldn’t do this kind of thing,” he said. “Hopefully I’m opening doors for other people in the village.”