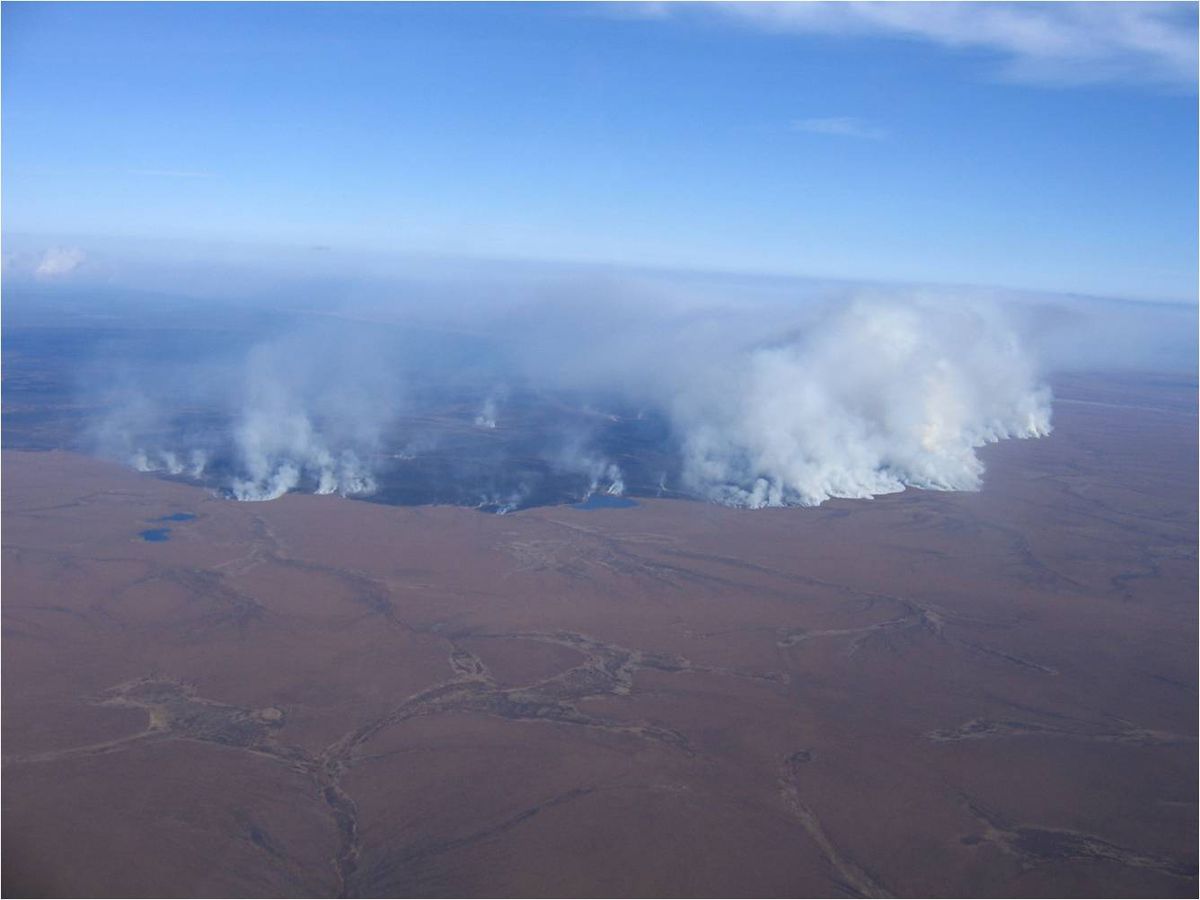 When lightning sparked a big fire in the tundra of Alaska's Arctic North Slope nine years ago, scientists were stunned. The Anaktuvuk River fire grew to more than 400 square miles and burned for months. It was bigger than the cumulative total of all prior North Slope tundra fires dating back to the 1950s.

If Alaska's warming trend continues, such fires will no longer be so extraordinary, according to a new analysis led by University of Montana researchers.

Their study, published online in the Sweden-based journal Ecography, uses past fire behavior and conditions to calculate probabilities of wildfires in 30-year timespans. If July temperatures average 13.4 degrees Celsius (56.1 degrees Fahrenheit) and moisture levels are relatively low, wildfires will become significantly more frequent, according to the analysis.

"The probability that an area will burn increases a lot," said co-author Philip Higuera, an associate professor of fire ecology at the University of Montana.

The biggest jump in probability of big fires is for areas that don't typically burn — the usually moist tundra of the North Slope and similar areas in western Alaska. If the 13.4-degree threshold is reached there, the probability calculations predict up to a fourfold increase in wildfire.

In tundra regions like the North Slope and the Yukon-Kuskokwim Delta, the fire danger will be "unprecedented" compared to the last 6,000 to 32,000 years, the study says.

The Anaktuvuk River fire in the northern Brooks Range foothills might have been a signal of what is to come.

The 2007 fire was probably the first for that area in 6,500 years, according to scientific evidence examined later, Higuera said. But the wait for the next big burn won't be nearly as long, according to the evidence gathered in the study.

"That's what the projections suggest, that we would expect to see more of those," Higuera said.

By the late part of this century, wildfires will burn more frequently in nearly all of Alaska, the calculations predict; in a wide swath of the state, the probability of fires will more than double by the middle of the century.

In some places — chiefly, the Interior Alaska boreal forest, where fires are already frequent — the increases may be already underway, Higuera said. Several past studies point to that same conclusion, he said.

Fairbanks has already passed the 13.4 degree Celsius threshold for average July temperatures, and Fort Yukon in the eastern Interior region is expected to reach that point by the end of this decade, according to projections by the University of Alaska Fairbanks' Scenarios Network for Alaska and Arctic Planning — the same set of projections used in the study to calculate future fire probabilities.

In other parts of Alaska, the July temperature threshold is in reach.

Bethel, the biggest community in the Yukon-Kuskokwim region, and Kotzebue in northwestern Alaska, will soon be at the July temperature threshold, even if global greenhouse gas emissions are reduced from current levels, according to the SNAP projections. Farther north, communities like Anaktuvuk Pass and Nuiqsut could have July temperatures averaging above 13.4 degrees by the late part of century, according to the SNAP projections.

While a warming climate primes Alaska for more frequent wildfires, the fires themselves contribute to warming — and create yet more favorable fire conditions.

Smoke from wildfires has deposited soot particles onto sea ice, which is already fragile for this time of year compared to recent averages. Darkened ice and snow melts faster, further weakening the ice coverage.

Tundra fires are notable for the sequestered carbon they release from the earth in the form of smoke and exposure of subsurface soil. The Anaktuvuk River fire opened a vast swath of tundra, sending carbon into the atmosphere that had been locked in the soil for as long as 50 years, scientists from the University of Alaska Fairbanks and other institutions found and detailed in a 2011 study published in the journal Nature.

The darkened surface left by tundra fires reduces the ground's ability to reflect solar energy back into space, a measure called "albedo," scientists say. It took four years for the area charred by the Anaktuvuk River fire to return to pre-fire albedo levels, says a new study by scientists from the Michigan Tech Research Institute. Even a much-smaller tundra fire in the Brooks Range foothills, the 2012 Kucher Creek fire, reduced albedo, causing solar heat to be absorbed rather than reflected back, says the study, published in the Journal of Geophysical Research Biogeosciences.

That could lead to future warming, possibly in a significant way, the study says.

The University of Montana-led study calculating future frequency is not a forecast for the coming season or for any year in particular, Higuera said. Instead, the study looks at decades-long trends and cycles, he said. More immediate predictions are available in the national wildfire outlook, which forecasts a fairly normal fire season this year for Alaska.