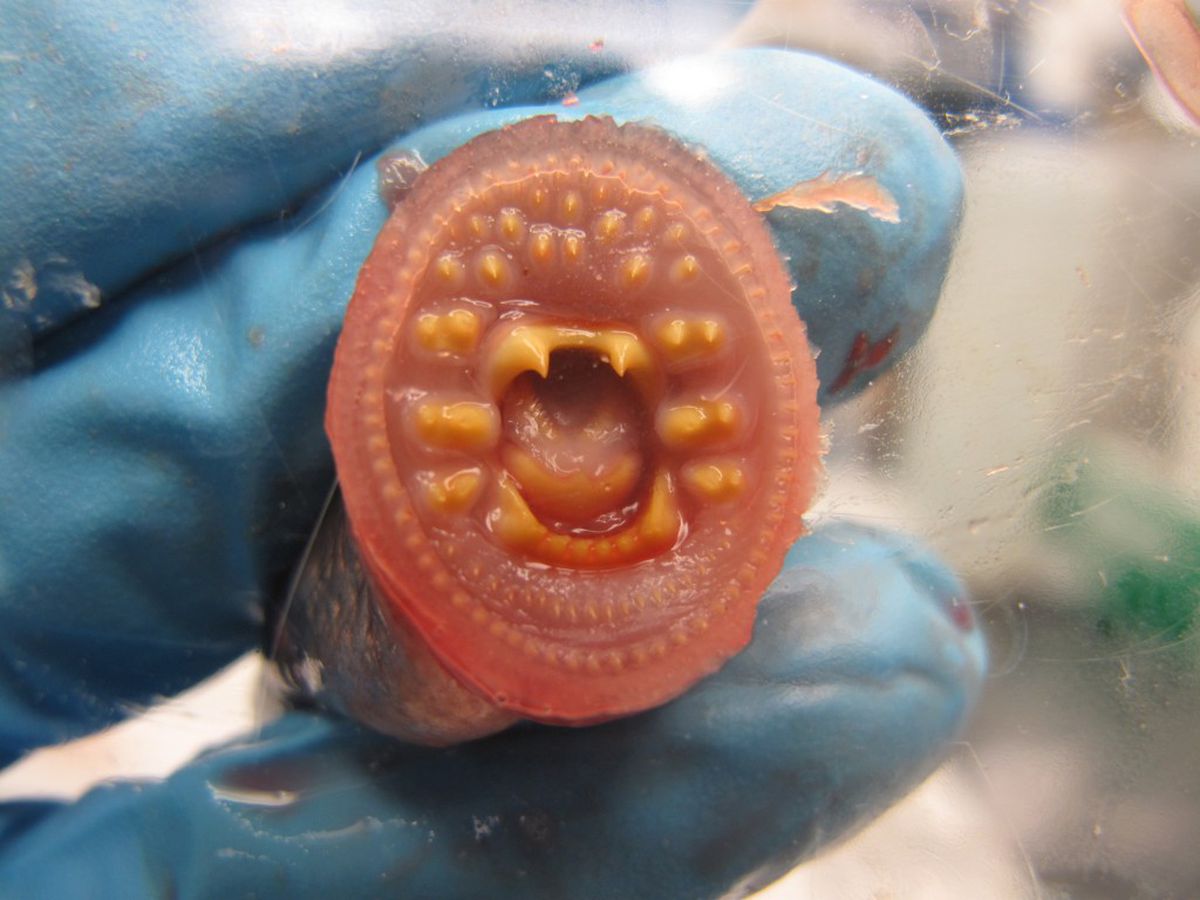 The mouth of an Alaska lamprey (Photo courtesy Katie Shink)

The mouth of an Alaska lamprey (Photo courtesy Katie Shink)

Last summer lampreys fell from the sky in Fairbanks.

It's hard to decide which is more astonishing, the aerodynamic mystery of how they got in the sky to start with or the fact that Alaska has lots and lots of the gruesome, prehistoric, flesh-sucking terrors. Millions of them. Squiggling and lurking in every suitable waterway from Southeast to the Arctic Ocean.

There's no reason to stay out of the water on their account, however. Lampreys only latch onto people if they're starving. And in Alaska, it's the humans that eat lampreys, not vice versa.

University of Alaska Museum of the North curator of fishes Andres Lopez finds the arctic lamprey a truly intriguing animal. Unchanged for nearly half a billion years, it's a genuine living fossil. "It's a jawless vertebrate," he said. "It has a spinal cord, but no skeleton. Just cartilage. Its teeth are not real teeth, but keratin, more like your fingernails."

Their life cycle is very similar to salmon, he said. They hatch in freshwater in places that salmon would find favorable for spawning. The young are very unlike the adults. They're blind and don't have the trademark ring of teeth. They bury themselves tail first into the mud and filter feed on whatever the water brings them, more like barnacles than fish.

Maturity can be anywhere between one and three years. Scientists aren't certain, Lopez said, but it probably varies depending on local conditions. They grow eyes and their bizarre mouth structure and otherwise transform into adults.

Some reach the ocean and attach to other fish, using their ring of lip and hooked teeth to hang on like a suction cup. And then they eat.

"They have something similar to a tongue with teeth on it, sharp plates," Lopez said. "They rasp into the fish and create a wound. Some are like vampires and rasp until the fish bleeds into their mouths."

And some scrape away into the flesh and beyond.

"One of my students is currently studying stomach contents," Lopez said. "She's finding some pretty meaningful chunks of fish. Intestines, fins, vertebrae. They can cause a lot of damage to whatever they're feeding on."

It's this image of the snaky lamprey with its maw stuck on the side of a salmon or trout, slowly sucking the life out of the fish, that gives people the creeps. Their invasion of the Great Lakes in the last century, where they destroyed the commercial trout fishery, is an oft-told resource management horror story.

Seagoing lampreys return to freshwater to spawn. They don't home in on the stream where they were born, Lopez said, but seem to follow the scent of the little filter feeders. An appropriate spawning area will have some gravel where they can build a redd, or nest, where the female can deposit as many as 100,000 eggs.

There are two different variations of the arctic lamprey, Lopez said. Those that go to sea and return measure about 13 inches long. Another group stays in freshwater and measures about 8 inches.

"They all go to the same spawning grounds," Lopez said. "They really are the same species. They just have two different strategies to get on with their lives." One species with alternative survival strategies isn't uncommon, he noted. But in the case of the lamprey, the alternatives are unusually extreme.

Europeans have considered lamprey a delicacy since Roman times. In the Middle Ages it was a favorite food of the upper classes. England's King Henry I (1068-1135) was said to have died as a result of overindulging in the dish. A glorious lamprey pie was a centerpiece at the coronation of Queen Elizabeth II in 1953. The town of Gloucester traditionally presented such a pie to the monarch at Christmas, but cut back to only sending one at jubilees as the main ingredient was fished out and its spawning areas filled in throughout northern Europe. Lampreys for the Queen's most recent pies have had to come from Canada.

Lampreys still flourish in southwestern France thanks to conservation efforts spearheaded by gourmets. Various preparations remain on menus in Aquitaine and northern Spain. American foodies are less enamored of it. Harvest Vine, a Basque-themed restaurant in Seattle, served lamprey dishes a few years ago, but hasn't done so recently.

Along the Columbia River, on the other hand, lamprey is prized by Native American tribes as a specialty served at celebrations. Fishers there pull the animal off rocks at waterfalls.

Alaska Natives also harvest lamprey, generally called "eels" on the Yukon, though Lopez points out there are no true eels in Alaska. (Eels have jaws, bones and pectoral fins; lamprey do not.)

The late elder Andrew Paukan of St. Marys described lamprey as the great winter comfort food, arriving after freeze-up when fresh fish was hard to get. Slits are cut into the ice and people patrol it day and night, sweeping through the water below with long poles with spikes on the end. A bonfire is sometimes kept burning on the beach.

"As soon as someone hooked into an eel, they shouted and everyone came out," Paukan said. "Then it was crazy. If there was one eel, there'd be thousands of eels."

The rush lasts for a couple of hours, if that long. "Once they stop, they're gone," Paukan said. "Everyone packs up and goes home."

A modern variant of the traditional pole is still used with the blade of an old double-sided saw attached to the business end. It arcs back and forth like a pendulum, snagging the slippery creature and whipping it onto the ice where it quickly freezes. Since the animals move in a swarm, it's possible to pick up a dozen or more in one sweep.

Since 2003, Fish and Game has managed a small commercial lamprey fishery on the Lower Yukon. The annual catch is set at about 20 metric tons, said Sabrina Garcia, assistant manager of the fishery. That allocation was determined by how much had been taken by subsistence users and doesn't change much, because it's difficult to guess how many lampreys will return at any time.

"The number of fish is the million dollar question," said Lopez. The fact that they generally make their migration after the river is frozen complicates getting an accurate count. But with 100,000 eggs per female, the population is likely in the millions.

Garcia said once the lampreys are detected in Emmonak, at the mouth of the river, villages start preparing for estimated arrival times as far north as Grayling, and everyone hopes for the best.

"The market changes every year," she said. Buyers range from the food market in Russia to the sport fish bait market in America, the pharmaceutical market in Asia and research facilities. But it's never a sure thing.

"The fishery is dependent on the ice," Garcia said. "People have to be able to stand on the ice to get the fish. We approved permits in 2004-2005, but the ice wouldn't support it."

The lack of a dependable source is one reason why Harvest Vine hasn't had lamprey on the menu recently. So we probably won't see ceremonial flights of the first Yukon lamprey to Seattle, with the smiling pilot cradling the precious catch as he delivers it to a gleeful chef. And don't expect to see anyone kissing a lamprey.

Garcia called arctic lamprey an acquired taste. They're extremely oily, which can be very satisfying when the temperature's below zero, but for a summer barbecue just makes a mess. Garcia's colleague at Fish and Game, biologist Seah Larson, tried smoking some and wound up with "a bucket of rich, fishy grease."

On the Yukon, the fish is more commonly baked, broiled or boiled. With no bones, it can be conveniently cut into chunks.

European commentators often remark on the beefy taste of lamprey. They don't seem to mention the oil. Preparations there often include a strong sauce of beef stock, olive oil, wine, cream and/or tomato. Harvest Vine's recipe called for custard.

The blood is said to be bitter, but it is sometimes the main ingredient in the sauce. The heads are discarded as are the stomachs, which run the length of the fish. In Europe, the spinal cord is thought to be toxic and is removed.

"The good news is they were showing up in parking lots last year," Lopez said. At least four were found on dry land. "We take that as an indication that their numbers are high in the Fairbanks area."

As for how they came to fall in fields and parking lots, far from water, plummeting down from above like little dragons that had suddenly lost their wings, Lopez said there was an obvious reason.

"The birds catch them and fly off," he said. "But these things are lively and slippery. I'm guessing the birds mishandle them a lot."

Birds don't have much to worry about. The lamprey's suction-cup mouth only works on a smooth surface, like a rock or the side of salmon. It's pretty much useless against feathers.

Nor should human Alaskans worry if they encounter one while wading in rivers, streams or lakes. "The adults stop feeding when they come into freshwater," Lopez said.