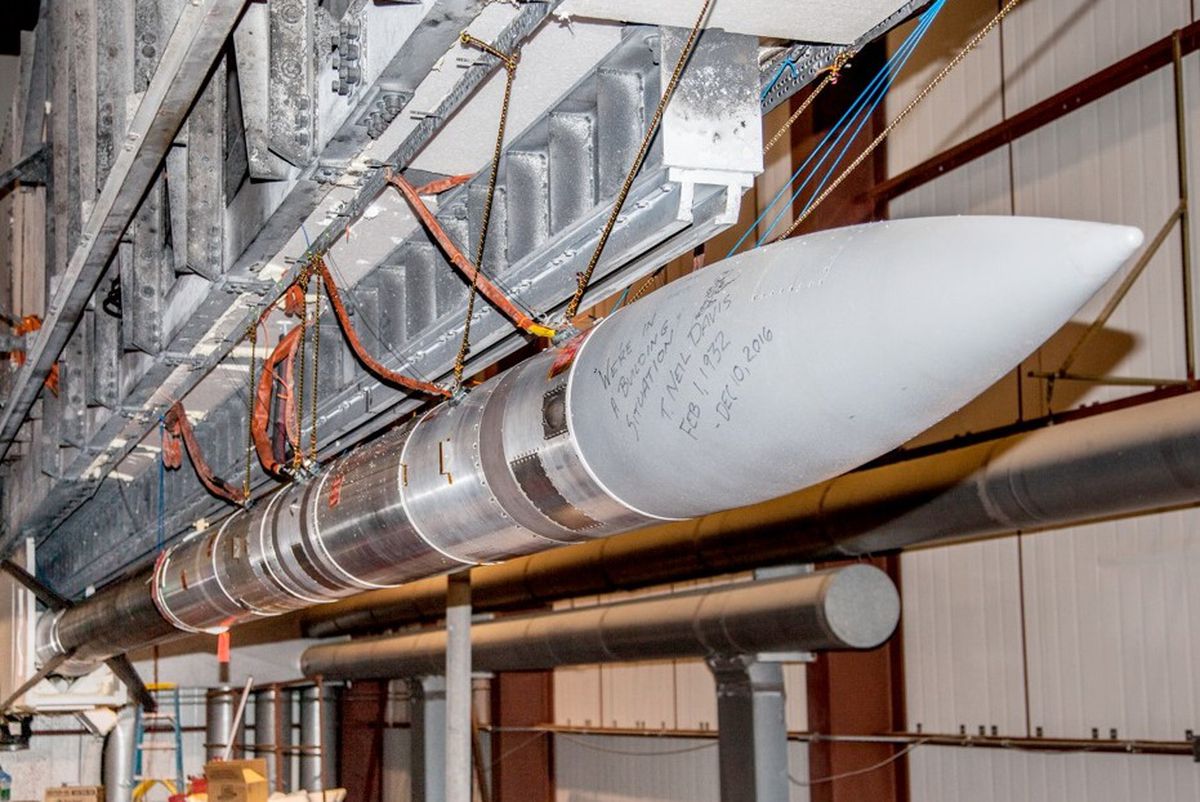 FAIRBANKS — When they launch, the four rockets now pointed north from Poker Flat Research Range will add to the 345 that have arced over northern Alaska during the past 48 years. Recently, Chuck Deehr remembered the first.

Deehr, 80, is a retired space physicist at the University of Alaska's Geophysical Institute. He had just earned his doctorate in 1968 when he was among those enlisted to help with the first mission from a rocket-launching pad in Chatanika, a complex that mushroomed from the muskeg in a few months.

Deehr's job in spring 1969 was to live at the Air Force base in Fort Yukon for three weeks. From a small equipment trailer there on the Arctic Circle, he operated cameras and other equipment to record a sort of manmade aurora. The red cloud and streaks in the sky visible almost everywhere in Alaska were caused by a release of a chemical called barium from a 50-foot rocket.

Nuclear weapons had a big role in that first Alaska launch and were the reason Poker Flat was built in less than a year by Alaska scientists, students and just-get-it-done guys rather than contractors.

To back up a bit, long before Cold War drama intervened, the late Neil Davis wanted a northern rocket-launching facility. The Geophysical Institute researcher and such colleagues as Tom Hallinan were the best in the world at developing low-light television cameras to observe the aurora; they wanted to send instruments up into it without having to travel thousands of miles from existing rocket ranges.

Knowing what he wanted, Davis had chosen unoccupied land out by the Chatanika River for a facility. Fairbanks North Star Borough officials, happy for the tax revenue, leased the land to UAF for $700 per year.

Poker Flat remained a dream. Davis and the university had no money for a rocket range. But things changed when an American B-52 bomber crashed into an ice-covered bay near Thule, Greenland, in January 1968. The plane was carrying four hydrogen bombs. Bomb contents scattered on the ice, costing millions in cleanup as the radioactive waste was shipped back for disposal in the U.S.

Denmark, which was in control of Greenland, barred the U.S. military from using a Greenland rocket range.

But military strategists had a problem only rockets could help solve. When a nuclear explosion detonated in the atmosphere, the bombs created large plasma clouds of ions and electrons that prevented radios and radars from working. Strong auroras can produce similar effects. Researchers wanted to differentiate between the two.

Military scientists had designed an experiment in which a rocket would release barium about 100 miles above Earth. The chemical would cause an artificial red aurora. They wanted to see if over-the-horizon radar could detect and track this plasma cloud. The researchers wanted to find out more about the properties that scrambled radio and radar signals, and they needed answers within a year.

That's when the door opened for the Alaska scientists. A rocket range in Churchill, Manitoba, had a full schedule of launches that year. Officials knew of Davis's plan — he had even written a Poker Flat feasibility study for NASA — so they set federal money aside for a rocket range in Alaska.

That money was not enough, and it was slow in coming. But Davis and others like Larry Sweet and Eldon Thompson started scrounging materials, including old mining cars that had been dumped in a river, steel beams from an old bridge over the Chatanika River, and a winch Sweet had seen in a Fairbanks backyard.

They started construction of the rocket range in mid-summer 1968. By March 1969, using no blueprints and labor from university staff members and students, they had enough of a facility to launch six rockets with barium charges.

Though the military was funding the launches, Davis and his colleagues rationalized a university group's involvement because he and others executed their own basic research during the launches.

As those first rockets blasted off one by one on cold nights from March 5-20, 1969, Chuck Deehr tracked the red auroras with television cameras from Fort Yukon. Others did the same from the Ester Dome observatory in Fairbanks. They spoke over the phone to one another and sent their information on the aurora cloud's whereabouts to an IBM computer on the UAF campus. From there, the location of the barium ion cloud was sent to military observers farther south in Alaska, who pointed their over-the-horizon radar at it.

Though he didn't know the military's results, which were classified, Deehr said the Geophysical Institute scientists delivered the red auroras, tracked their locations, and got fantastic science information.

"Everything worked," Deehr said. "That was the amazing part."

In the flurry of the first rockets, the ever-busy Neil Davis launched his own NASA rocket while Deehr was still at Fort Yukon. Davis, the enterprising scientist who died two months ago, was the lead researcher of five NASA rocket missions from Poker Flat over the years.

As five more blast off this winter, his legacy of a rocket range in the quiet country north of Fairbanks lives on, nearly a half-century after it started.

Correction: An earlier version of this story gave an incorrect date for the period during which Chuck Deehr monitored manmade aurora from Fort Yukon, and incorrectly identified Eldon Thompson. It has been updated to correct this information.