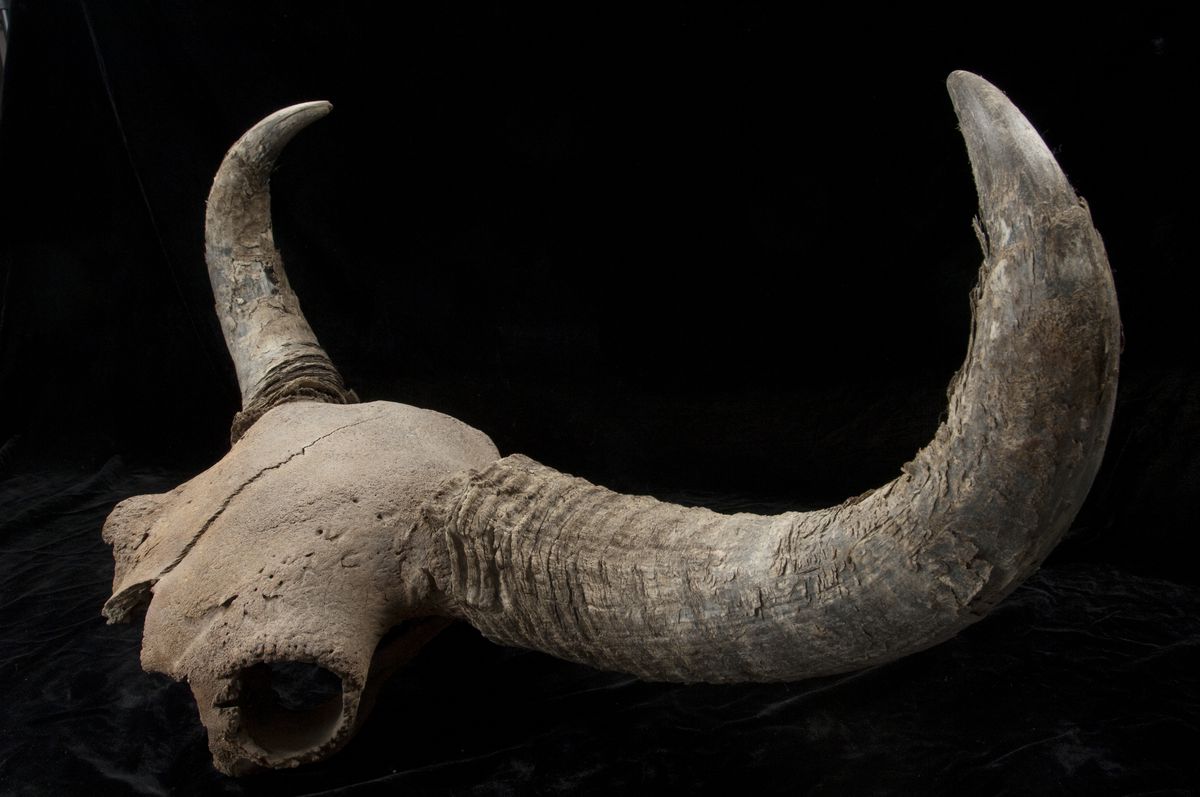 The oldest known bison fossil in North America was discovered at Ch’ijee’s Bluff along the Porcupine River near Old Crow, Yukon. The fossil was below a layer of 130,000-year-old volcanic ash, which allowed scientists to date it. (Alberto Reyes / University of Alberta)

The oldest known bison fossil in North America was discovered at Ch’ijee’s Bluff along the Porcupine River near Old Crow, Yukon. The fossil was below a layer of 130,000-year-old volcanic ash, which allowed scientists to date it. (Alberto Reyes / University of Alberta)

After humans, the mammals most successful at colonizing North America were the bison that thundered across the Great Plains.

Just when they arrived on the continent from Asia, however, has long been a mystery.

Now genetic and geologic information has helped pinpoint the time of their migration across the Bering Land Bridge. Bison arrived between 135,000 and 195,000 years ago, a new study finds. Humans were believed to have been much more recent travelers, with the first wave of migrants about 20,000 years ago, though that arrival time is facing increasing contention among experts.

After the first bison migrations, the animals multiplied, diversified and became the dominant grazers, displacing mammoths, Pleistocene horses and other mammals that arrived earlier, said Duane Froese of the University of Alberta, lead author of the study.

"They became very successful very quickly," Froese said. "Outside of humans, it's pretty much the most successful mammal invasion into North America."

The study is published in the Proceedings of the National Academy of Sciences.

Its findings rely in large part on DNA extracted from the oldest known bison fossil, a bone found a decade ago near the Gwich'in village of Old Crow in Canada's Yukon territory.

The Yukon fossil was found near the Porcupine River. It was just below a layer of ash that was spread in a massive eruption about 130,000 years ago from a southwestern Alaska volcano that has since been transformed into what is now called the Emmons Lake Volcanic Center.

The ash spread by the eruption is a time marker in the earth that allowed scientists to determine the Yukon bison fossil's age and confirm it as the oldest known bison fossil in North America, Froese said. Radiocarbon dating does not work beyond ages of about 40,000 to 50,000 years, so scientists needed other methods to determine the date, he said.

Thanks to new technology, DNA from the Yukon fossil was extracted and analyzed, he said. It was compared with that from a slightly younger fossil found near Snowmass, Colorado, and both were compared with dozens of younger bison fossils, including some from Yukon soil above the volcanic ash, where there were "lots and lots of bison all over the place," Froese said.

From that genetic material, the scientists determined that all the bison had a common ancestor 135,000 to 195,000 years ago, a period when the Bering Land Bridge was exposed, he said.

The genetic information also showed that bison migrated over the land bridge in a second wave 21,000 to 45,000 years ago, the study found.

Once bison were in North America, they quickly developed into new genetic forms. The first species on the continent — the species that left the Yukon bone — was the steppe bison, Froese said. The Colorado bison fossil, though only about 10,000 to 20,000 years younger, was of a different but related species, the giant long-horned bison, he said. That is a species known for its huge size, with fossils not found north of the Lower 48 states, he said.

Steppe and giant long-horned bison are Pleistocene species now extinct, but modern bison are their descendants.

The study results answer what has been a nagging question: Why do many assemblages of fossils made up of bones from mammoths, horses, rodents and other animals not include bison?

"It's been kind of a long puzzle in the world of paleontology and paleobiology," Froese said.