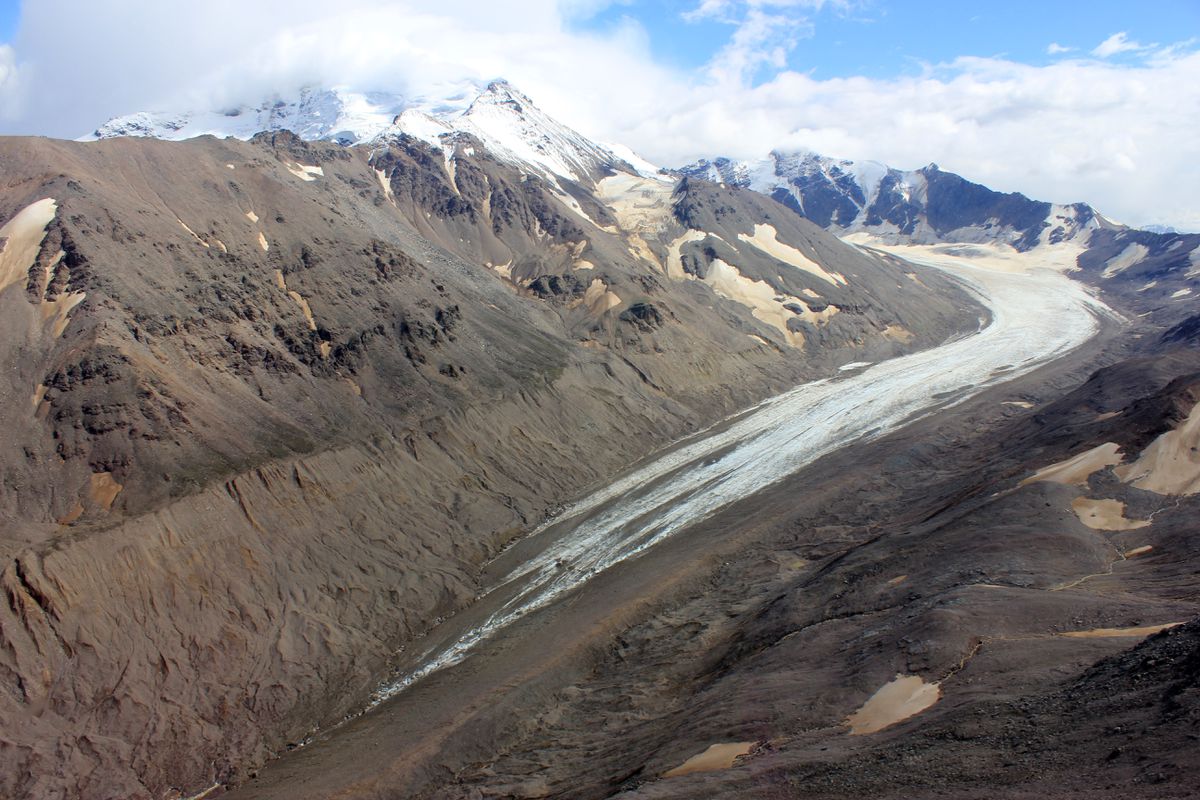 The small and sometimes patchy glaciers that cling to high mountain slopes in Alaska appear to be big players in groundwater and river systems far from the sea.

That is the conclusion of a University of Alaska Fairbanks-led study that traced the melt from one of those high-altitude glaciers to the groundwater that flows, ultimately, into a major Alaska river.

The study focused on Jarvis Glacier in the eastern Alaska Range, the nearby and better-monitored Gulkana Glacier and the points downstream from them. Jarvis Glacier feeds into Jarvis Creek, a site known for its whitewater rafting, and the creek flows into the Tanana River, which feeds the Yukon River.

Compared to the big coastal glaciers that draw cruise ship sightseers who watch big ice chunks fall into the sea or the expanses of ice that drape other parts of the Alaska Range, Jarvis Glacier is puny.

And like other glaciers, it is shrinking. Glacial coverage in the Tanana River watershed decreased by 12 percent from 1950 to 2010. Jarvis Glacier receded about a mile from 1949 to 2015, and in recent years has thinned dramatically; Gulkana Glacier is also thinning.

The glaciers' accelerated melt accounts for 15 percent to 28 percent the annual flow in Jarvis Creek, the study found. But only about half of the streamflow comes out of the mouth end of the creek, it found. About half filters down into an aquifer, the study found, flowing through the soil and then into lowland rivers like the Tanana and, ultimately, the Yukon.

Melt from shrinking Jarvis Glacier and associated glaciers answers a question that has dogged scientists: Why is the Tanana River water flow increasing in winter even though snow and rain are not?

The discovery that glacial melt is recharging the area's aquifer has implications for other arid mountain regions with high-altitude glaciers, the study's authors said.

"It's a merging of two disciplines that probably haven't worked together as well as they should — hydrology and glaciology," said co-author Shad O'Neel, a U.S. Geological Survey research geophysicist.

The big flow of water from Jarvis Glacier is temporary. There is a point of diminishing returns from the shrinking glacier.

"The glacial melt will start to decrease rather than increase," said Anna Liljedahl, the lead author and an associate professor at UAF's Water and Environmental Research Center.

"Fifty years from now, that contribution will be very minimal," she said.

Ultimately, Jarvis Glacier and the meltwater it produces will disappear, as will similar mountain glaciers, some of them so small that they don't even have names.

Such small mountain glaciers have been under-appreciated — and so has their role in the ecosystem, say the study's authors.

Up to now, studies of glacial melt have focused largely on effects to seas, especially sea levels, O'Neel said.

"We're learning that these glaciers have a much broader role in all kinds of processes beyond sea-level rise that we didn't even know about," he said.

Groundwater, when it springs up into the beds of the Tanana and Yukon rivers, is free-flowing, even in winter, when the rivers' surfaces are frozen fast, she said. The groundwater seeps are warm spots in the rivers, and salmon use them to spawn, she said. So there will be big changes in the ecosystem when glaciers are no longer able to contribute to the aquifers, he said.

On the other hand, there might be some beneficial effects to people, Liljedahl said. Reductions in glacial-fed groundwater might leave the rivers more solidly frozen and safer for travel, she said.

When it came to traveling to the field sites for the study, which required work conducted over several seasons, proximity to the UAF campus, Fairbanks and Delta was important, Liljedahl said. She and her research partners hiked in or used all-terrain vehicles to reach study sites, sometimes spending a few days there.

Logistics of getting to Jarvis Glacier, for example, were manageable, she said.

"It's still remote, even though it's pretty convenient by Alaska standards," she said. "I'm very fortunate to have people with me who like camping and who like adventure."

Now Liljedahl wants to repeat the project at other Arctic and sub-Arctic sites that might be less accessible. What is happening at Jarvis Glacier, Jarvis Creek and the rivers fed by the aquifer there, she said, is likely also happening on Alaska's North Slope and in Canada, Russia and elsewhere.