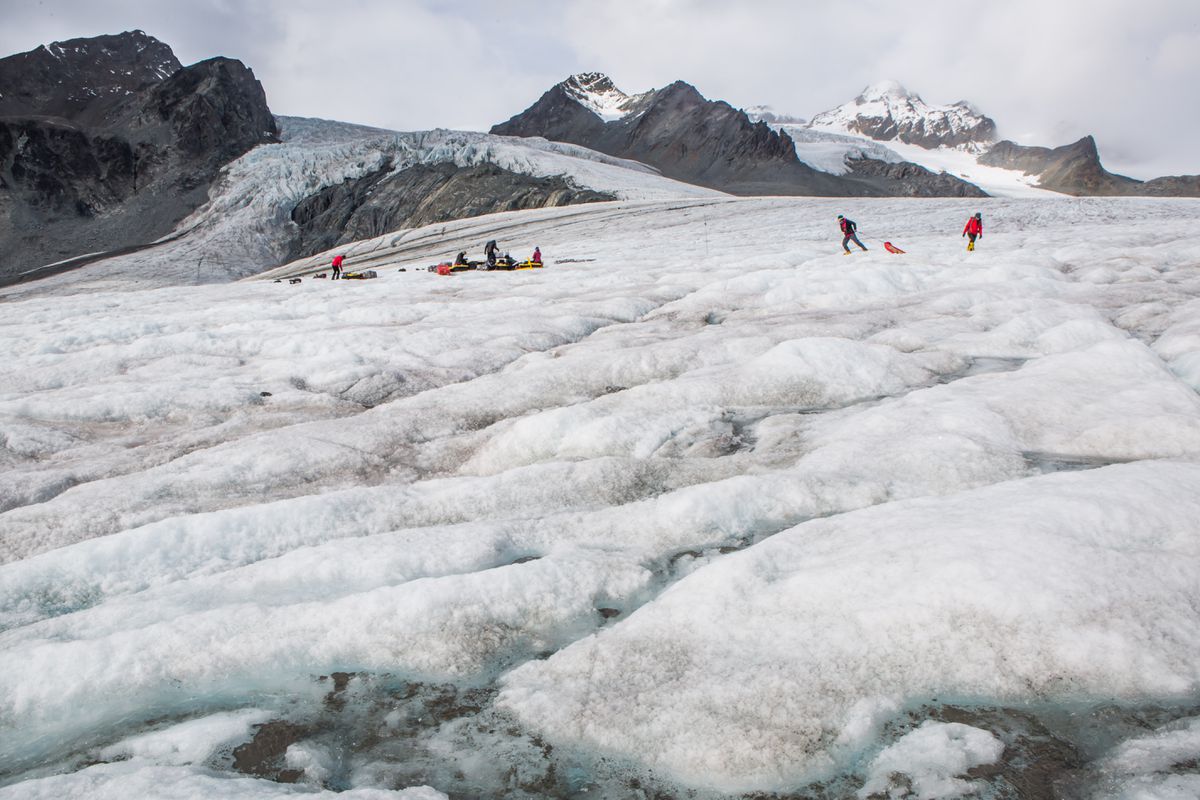 A collaborative team of scientists puts seismic equipment on Gulkana Glacier to see if a lander will work on icy Europa, one of Jupiter’s moons. (Meghan Murphy)

A collaborative team of scientists puts seismic equipment on Gulkana Glacier to see if a lander will work on icy Europa, one of Jupiter’s moons. (Meghan Murphy)

Icy Europa, one of the biggest of the nearly 70 moons orbiting Jupiter, is more than 390 million miles away from Earth, and getting there from here would take six years by spaceship. Surface temperatures range from minus-210 to minus-370 degrees Fahrenheit. And the ultra-thin atmosphere is bathed in so much radiation that a human exposed to it would die within about 10 minutes.

So scientists testing seismology equipment they hope to place on Europa have found a more convenient try-out spot: Gulkana Glacier in Interior Alaska.

Europa is the object of fascination because it is one of the best candidates in the solar system for extraterrestrial life. It has an icy crust over what is believed to be an ocean, all lying atop a rocky core. The liquid water, essential chemicals and energy — heat produced by powerful tides created as Europa completes its elliptical orbit around Jupiter — amount to the three elements needed for life, astronomers say.

To better understand the interplay of ice on top of water on top of rock, including a sense of how deep the ice layer goes, NASA and scientists working with the space agency want to deploy seismic sensors on Europa.

That is where Gulkana Glacier comes in.

It has an icy surface, with meltwater flowing underneath, all resting atop bedrock. There are also plenty of sources of noise to collect and measure — cracking ice, trickling water, rockfalls, footsteps if people are there and even earthquakes, big or small, if they happen.

All that makes it a useful Europa stand-in, said Daniella DellaGiustina, a scientist at the University of Arizona's Lunar and Planetary Laboratory and one of the leaders of the team that just completed an expedition to the glacier to test seismology equipment.

"We really thought that Gulkana was the best place to do our preliminary pilot study," said DellaGiustina, who left the glacier Sept. 11 after spending four days there.

Some of the noises, like the creaks and cracks made by moving ice, are "the sort of thing we might expect on Europa" as the shifting tides move the surface ice, DellaGiustina said.

The scientists did what they could to replicate a Europa mission.

"We had a little mock spacecraft up on the glacier with us," she said.

Fresh off its 13-year Cassini mission, which orbited Saturn and ended with the spacecraft's scheduled destruction Friday, NASA is planning a lander mission to Europa.

[Cassini crashes into Saturn, its mission celebrated and mourned]

NASA hopes to install equipment to measure Europa's seismic signals, and that is what DellaGiustina's team — which has members from the University of Arizona, University of Maryland and University of Alaska Fairbanks — intends to contribute.

Deploying equipment on Europa would be much more complex than on Earth. Here, scientists can scatter devices almost as widely as they want. On Europa, any such equipment will likely have to be deployed in a single step. It could be attached to the landing craft's legs in a way that would touch the ice surface directly — the scientists' preference — or it could be kept inside the landing craft, possibly encased in a vault.

Either way, the devices would be clustered together. Various close-together arrays, including the vault option, were tested as the devices picked up noises and signals on and below Gulkana Glacier.

The glacier, accessible from a trailhead that's about a 2 1/2-hour drive from Fairbanks, is well-used by scientists. It is one of the world's best-studied glaciers, with its mass balance monitored by the U.S. Geological Survey since the 1960s. It is the setting for an outdoors-education program, Girls on Ice, founded by UAF glaciologist Erin Pettit, one of the seismic-system team members. And it is a site very familiar to DellaGiustina, an outdoors enthusiast who got her master's degree in physics at UAF, where she studied glaciers.

The just-completed expedition to Gulkana Glacier was a success, said Hop Bailey, program manager at the University of Arizona's Lunar and Planetary Laboratory and another lead scientist on the project.

"It was certainly a very good tune-up," Bailey said.

There is no guarantee that the group's seismology program will be selected by NASA to be part of a future Europa mission. Other groups are competing for that spot, Bailey said.

But the Gulkana experience — and future field experiments planned in Greenland, where work space is vaster and the ice layer is thicker — might provide an edge, he said.

"There are other teams out there. None of them have a field program," Bailey said.

The Gulkana expedition was not the first to use Alaska as an analog for Europa.

Scientists from NASA's Jet Propulsion Laboratory have experimented with a Europa rover prototype in ice-covered lakes in Utqiagvik (formerly Barrow). The rover, first taken there in 2012, was designed to operate upside down, with its wheels rolling on the ice's underside.

Even if the Europa plans fall through, the seismology work the group did on Gulkana could lead to deployment on closer destinations within the solar system, Bailey said.

Asteroids could be the subject of seismic study, as could Mars, he said. Even Earth's moon needs some more seismic research, he said; the last such on-site work was during NASA's Apollo program of the 1960s and 1970s.

"We'll find a landing site for this thing, one way or another," he said.