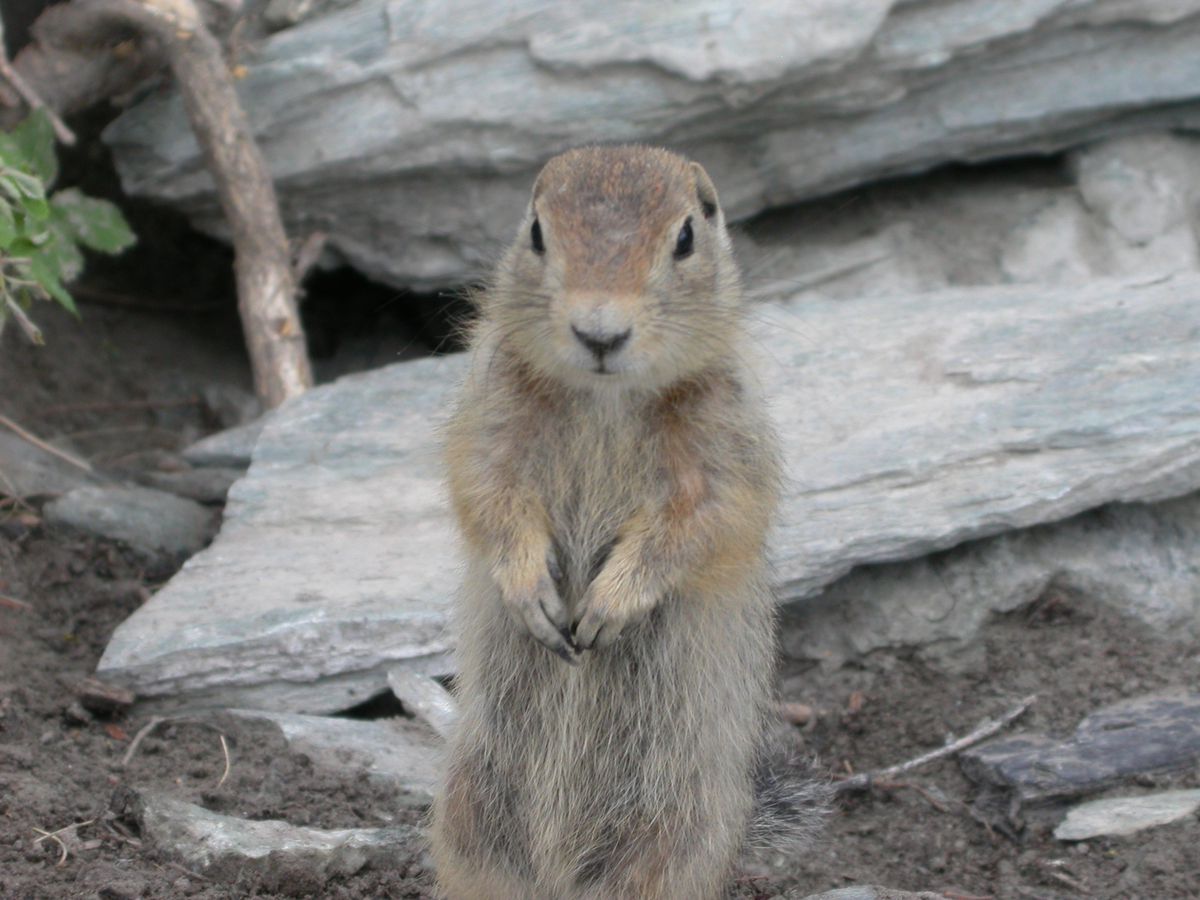 An arctic ground squirrel near O’Brien Creek on the Copper River. (Photo by Ned Rozell)

An arctic ground squirrel near O’Brien Creek on the Copper River. (Photo by Ned Rozell)

Maybe she has the right idea, the arctic ground squirrel. Sniffing the chilly air, looking up to see the first stars of the season, she has decided to check out. A few weeks shy of fall equinox, the squirrel is now bunkered up for winter, 3 feet beneath the tundra of the North Slope.

"There's tons of food, there's tons of light, so why are they hibernating?" said Cory Williams of the University of Alaska Fairbanks.

Williams studies ground squirrels at Toolik Lake and near Atigun River in northern Alaska. The biologist with the Institute of Arctic Biology is interested in — among other things — how quickly the animals tune their body clocks to sunlight in summer, and how they ignore solar rhythms while underground.

Arctic ground squirrels are one of the star organisms of northern science. The size of a loaf of pumpernickel, they are the subject of dozens of scientific papers. Why? Ground squirrels are easy to catch, and recatch, using wire traps baited with carrots. They don't mind hibernating in a lab setting, and they recover well after surgeries to implant temperature sensors within their abdomens.

Using that sensor (the size of a large pill, later removed from the squirrel), the institute's Brian Barnes got the arctic ground squirrel on the cover of the journal Science in 1989. The sensor told him the body core temperature of arctic ground squirrels can drop below the freezing point of water during the deepest stages of hibernation.

Using the magic trick of supercooling, ground squirrels avoid the North Slope's winter reality — no light, no food, constant cold — for up to three-quarters of the year. Mother ground squirrels take it to the extreme, spending more than a month longer underground than the males and yearling females.

[On the menu for northern snowshoe hares: Dirt]

Other animals have different strategies for the closure of the northern kitchen. Robins take off to Colorado and Mexico. Some insects allow themselves to freeze solid before rebooting the following spring. Musk oxen, the wind tousling their thick hair, kick at the hardening snowpack and say whatever. Right now, mother ground squirrels have said See you next April.

Though the mama squirrels are now nowhere to be seen, truck drivers on the Dalton Highway are still spotting others standing at attention on the tundra. Those are probably males, and a few females born this summer. The males will continue popping above ground and gathering edible greens until September or October, when all will be white and windy.

By Halloween, the experienced female squirrels have been dormant for two months. UAF scientists including Barnes found the squirrels, about the same body temperature as you and I during the summer, will drop to just below 32 degrees Fahrenheit for two to three weeks at a time while hibernating.

Just when you think they are dead, the squirrels stir, shivering their way up to 100 degrees Fahrenheit. After 10 to 20 hours of pumping warm blood, they then plunge back into suspended animation for another few weeks.

After a long winter of this pattern, using some unknown cue, the males will snap out of it in April. While remaining underground under the windpacked snowscape, they will eat their vegetation caches and mature sexually. They then emerge to the sun, find their own turf to defend, and wait for the females to show.

Females, which can live to be 10 years old, sometimes take a peek outside, decide it is too snowy to be up, and go back into dormancy. The males, who live to about three years (partly because they fight each other so much over the females), wait it out. Once the females emerge, it's game on.

Females become pregnant within one to four days of crawling from their dens. Thirty days later, the mothers give birth to as many as 10 pups. They nurse them for another month. As the arctic summer fades in early August, their job is pretty much done.

Before some song birds have even left the North Slope, mother squirrels have disappeared into their burrows. Why so early?

"Being active on the surface is more dangerous," Williams said, noting the many predators of the ground squirrel, from eagle to wolf to bear. "There's less exposure to predators, plus they're no longer caring for young."

What's it like right now, down there in the dark? The ground is now relatively warm, and the squirrels can stay the same temperature as the dirt until December or January, when the cold soaks down and freezes the ground. If you could reach in then and cup a ground squirrel with your hand, it would feel like a cold, furry rock.