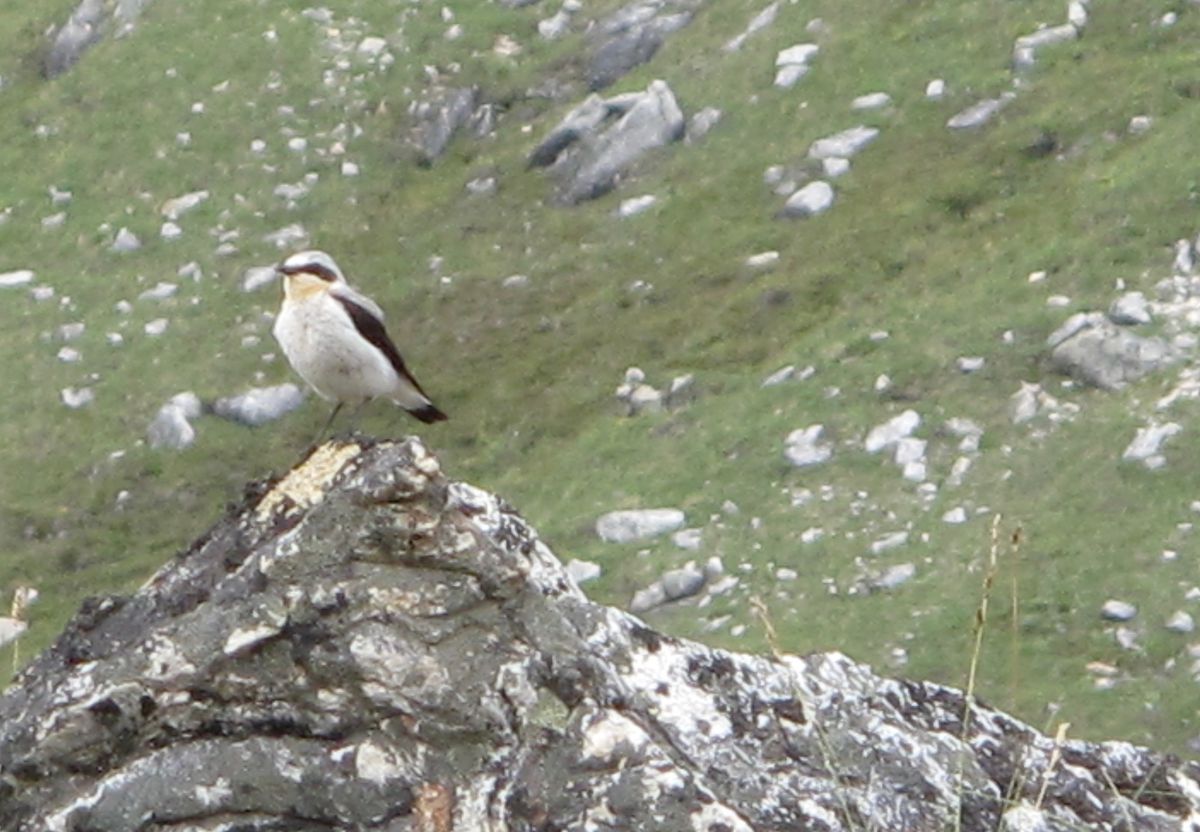 A northern wheatear in the Kokrines Hills of Interior Alaska. (Photo by Ned Rozell)

A northern wheatear in the Kokrines Hills of Interior Alaska. (Photo by Ned Rozell)

Birds that spent their summer next to musk oxen are now leaving Alaska to spend winter with zebras.

Northern wheatears are robin-size songbirds with tan bodies and handsome black eye bands. Wheatears are now gobbling insects in the rocky hills above Wales in Western Alaska. The birds will soon fly into the moist air just after sunset, maybe tonight, and cross the Bering Strait.

From Wales, the birds will travel the length of Russia and then Kazakhstan before crossing the Arabian Desert and then the Red Sea. The trip of 9,000 miles — perhaps the longest migration of any songbird — will take three months, until the birds stop for the winter in eastern Africa: Sudan, Uganda or Kenya.

Franz Bairlein is a German biologist and director of the Institute of Avian Research in Wilhelmshaven who helped discover the wheatear’s migration route. In June 2009, his team members captured 30 of the birds at Eagle Summit north of Fairbanks. They fitted them with backpack geolocators, lightweight devices that record the time and whether it is light or dark outside.

The next summer, the scientists recaptured three of the birds at Eagle Summit and retrieved the geolocators. From the information recorded on the tiny devices, they teased out the wheatears’ incredible journey from Alaska to Africa and then back again the next spring.

At the same time, the scientists performed an identical experiment with another population of northern wheatears that spends summers on Baffin Island in Arctic Canada. The one bird whose geolocator they were able to recover on Baffin Island spent its winter in Mauritania, in western Africa. That bird traveled southeast on its fall journey to Africa, starting its trip with a 2,000-mile Atlantic Ocean crossing, from Baffin Island to the British Isles.

The Alaska and Baffin Island populations of wheatears probably never meet, either on the tundra or on the savanna. The scientists determined this by examining their feathers using isotope analysis, to determine the water sources from which the birds drank.

Scientists don’t know for sure how the two groups of wheatears developed those parallel life strategies on different halves of the globe. Bairlein said that during the last great glacial period, when much of the far north was ice-covered, wheatears may have been holed up in the Middle East. When the glaciers shrank from the continents, one group of wheatears may have expanded to the northeast, reaching Alaska, while the other drifted northwest, reaching Canada via Europe and Greenland. Somehow, they lost touch.

Another German scientist in 2010 studied the wheatears now staging in Wales. Heiko Schmaljohann, also of the Institute of Avian Research, attracted Wales wheatears to electronic scales holding plastic dishes full of mealworms. When a bird landed, he and his helpers looked through a spotting scope to record its weight. The scientists wanted to find how fueled-up the birds were before they headed out over the Bering Strait.

Schmaljohann captured more than 100 wheatears — all of them new birds that hatched that summer — and fitted many with radio transmitters. He found that most birds took off just after midnight on August nights, and almost all in a southwest direction from Wales.

How do birds that pecked from eggshells on Alaska tundra just this summer know how to make it to Africa? The birds are born with that knowledge, maybe tied to the Earth’s magnetic field and landforms.

Why do wheatears and other migrating birds wait until night to fly? That’s a tough one to answer, but researchers think the cover of darkness might protect them from predators. Cooler temperatures and more stable flying conditions might also exist at night, and, if birds land during daylight, insects are easier to find.

As the northern wheatears knife into the wind at Wales and leave Alaska, they will not reach Africa until November. After four months in the sub-Sahara with giraffes, they will again feel the urge, and hop from an acacia tree branch. Their return trip to Alaska in 2020 via the same route will be several weeks faster than their fall journey. The nomads will then raise new wheatears with the help of Alaska’s most abundant natural resource, bugs.