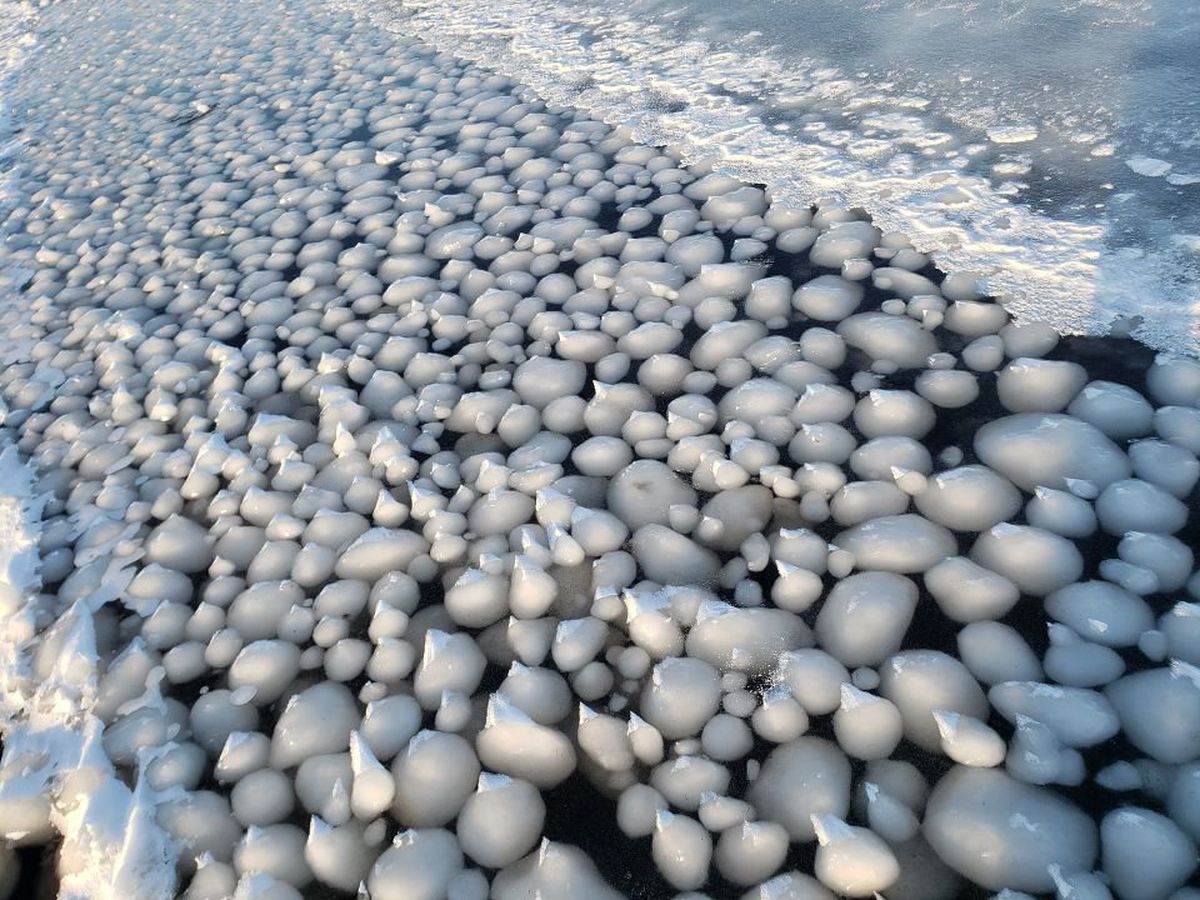 Fishermen from Kivalina made a curious discovery on the Wulik River last week. Danny Foster and Mike Hawley were ice fishing outside of town when they came upon something they’d never seen before: large balls of ice beneath the surface of the river.

“They were approximately 10 inches around, most of the balls,” said Foster. "The smaller ones were like the size of an orange and a cantaloupe.”

The balls were locked under a layer of clear ice, so the surface of the river was frozen smooth.

“I was just so amazed. I got really excited,” Foster said. "I pulled out my phone, took some pictures and then I explored the area.”

Hawley said the weather was nice and calm that day. At the time, he had no idea what could have caused the balls to appear.

“It was the first time I saw those,” Hawley said. "What I was wondering was where did that come from and how did the ice form up like that?”

The same day the two fishermen found the Wulik River balls, a story on CNN Travel described similar ice balls scattered across a beach in Hailuoto, Finland. Some locals there told CNN they, too, had never seen anything like it before.

"I, personally, haven’t seen anything similar in Alaska,” said Crane Johnson, a hydrologist at the National Oceanographic and Atmospheric Administration’s River Forecast Center.

Foster sent his pictures to the television station KTUU, which reached out to Johnson to find out what could have caused the balls to form. Johnson said nobody in the office had seen them before, so he reached out to Steven Daly, a prominent North American ice expert.

Daly thought it might be frazil ice, the first kind that appears in a river during freeze-up, Johnson said. Water in rivers can become “supercooled,” which means its temperature is below freezing, but it’s not frozen solid. Under those conditions, ice crystals can form and bond together into larger structures, which make frazil ice.

“Frazil ice is the first formation of ice in a river and then it centers together, or bonds together, and forms small chunk ice, that then forms small pan ice which then floats on the surface of our rivers. That’s the natural progression we see,” Johnson said.

Interesting formation of ice on the banks of the Wulik River near Kivalina. We suspect a combination of strong waves and super cold water created these ice balls. pic.twitter.com/oIM19Jle2N

Typically, rivers like the Wulik will have those pans of ice floating on the surface, which then join together to make larger plates of ice.

“It centers or bonds to the outside and these pans continue to grow and then multiple pans bump into each other and form a larger pan,” said Johnson. "It will continue to grow as long as the water is supercooled.”

But in the case of the Wulik, the river made ice balls rather than pans or sheets. Johnson said ice expert Daly thought the balls were likely created because of wave action in the water.

“The wave action forms balls, so it centers three-dimensionally instead of just in a flat pan formation,” said Johnson.

Ice balls like these occasionally appear in the Great Lakes, where waters are often turbulent and stormy during late fall and early winter.

CNN Weather had a similar explanation for the Finnish beachside balls. They wrote that turbulent water breaks up slushy ice, which then reforms and sticks to itself in the supercooled water. Then, waves roll and tumble the slush forms, smoothing the balls like a polished stone.

What’s still stumping scientists in Alaska, however, is how the balls ended up beneath the layer of clear ice.

“Maybe the balls were formed a little bit upstream and floated down into this quiet area and then the clear ice formed second,” Johnson mused. "That’s my guess, is that then clear ice formed after the balls. It’s all just a guess. We looked at those pictures and we were really curious about how it got trapped in that clear lake ice.”

For Hawley, a takeaway is that especially now, weather and ice can be unpredictable, so caution is critical.

“It would probably be best for people to be safe and watch the ice conditions before they go on the ice on the rivers,” he said.

Foster wonders how much a changing climate may have affected the Wulik to cause such an unexpected ice formation. After all, it has been a very warm year, he said, full of strange weather.

“We have no snow. The ice keeps melting,” Foster said. "The weather keeps getting warm and cold, not like how it used to be back then when I was younger.”

So both the fishermen and Johnson hope to have more solid answers in time.

But for now, Kivalina residents — and those in Hailuoto, Finland, no doubt — can enjoy watching a special natural phenomenon as long as it lasts.