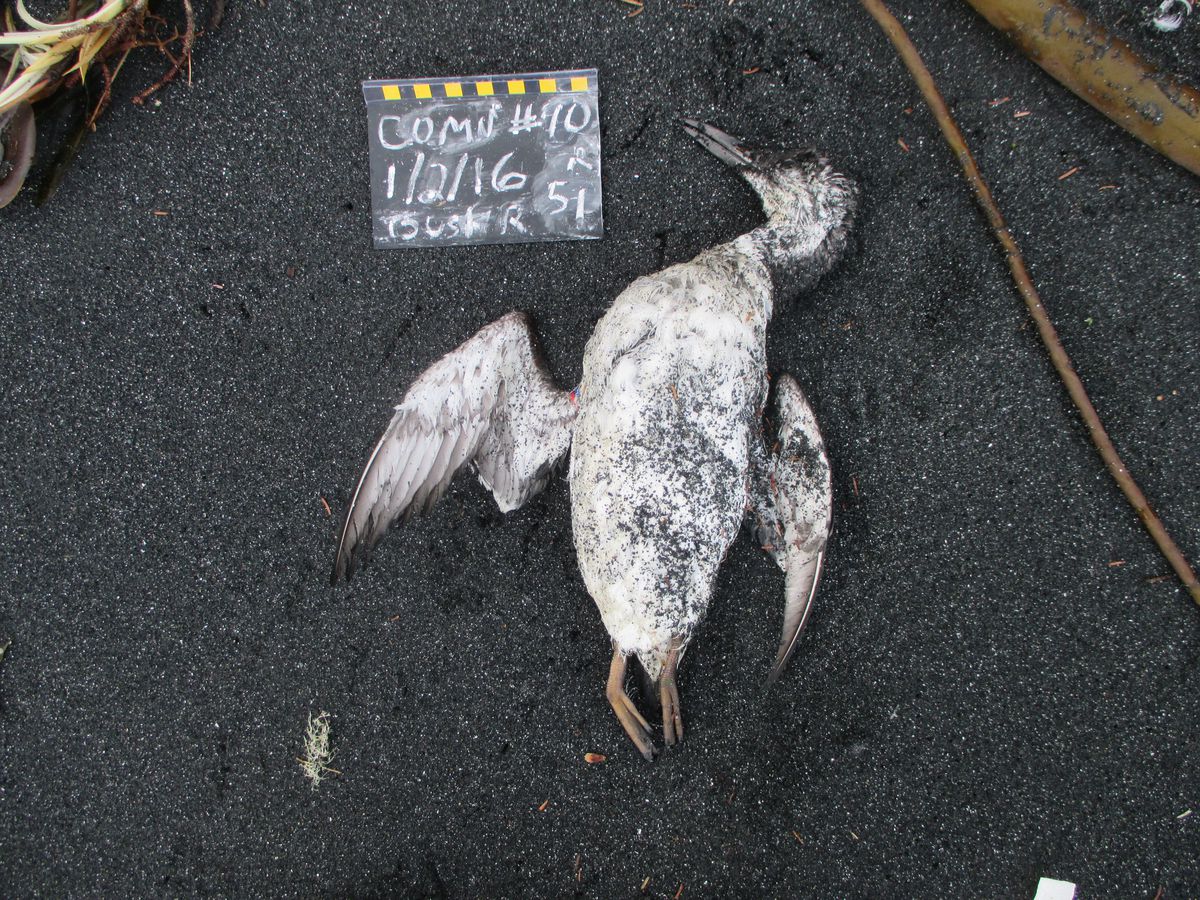 A recently dead common murre found by a citizen scientist on a routine monthly survey in January 2016. An intact, fresh bird indicates scavengers had not yet arrived. This carcass had probably been on the beach only a few hours. (Photo provided by COASST)

A recently dead common murre found by a citizen scientist on a routine monthly survey in January 2016. An intact, fresh bird indicates scavengers had not yet arrived. This carcass had probably been on the beach only a few hours. (Photo provided by COASST)

Scientists say they now better understand how a Pacific Ocean heat wave known as “the blob” contributed to huge numbers of common murres dying across a swath of Alaska’s coastline in 2015 and 2016.

In 2014, the blob spread through waters up and down the Pacific coastline. The warmer water disrupted the seabirds’ food supply, leading to starvation, according to a new study published Wednesday in the journal PLOS One.

In warm water, the small fish that make up the diving bird’s diet suffered, the study reported. The murres also faced more competition with larger fish that eat the same thing, according to John Piatt, lead author of the study and a research biologist with the U.S. Geological Survey and the Alaska Science Center.

During a period of months in 2015 and 2016, scientists documented around 62,000 murres washed up on beaches from Southern California to the Gulf of Alaska.

“That’s more than any other die-off, where the numbers have been tallied, that anybody’s ever observed anywhere for any seabird in the world,” Piatt said.

But that number is just a fraction of what scientists estimate is a half-million to 1.2 million murres that died during the marine heat wave, Piatt said. Some birds never made it ashore, dying and sinking at sea, while others were likely scavenged or covered in sand. Plus, a lot of the birds died in winter, when it’s hard to survey Alaska beaches.

“It was clear that this was a much larger event than any of us had encountered before,” Piatt said.

At the time, it wasn’t clear exactly what was causing it, Piatt said.

The blob seemed to be a likely cause, Piatt said, but how that warmer water led to the bird deaths continued to be a mystery.

Murres must eat a lot to survive — half of their body mass in food every day, Piatt said. If they’re not snarfing down enough fish, according to Piatt, they can start to starve in four days.

Murres “fly” underwater, diving nearly 200 meters deep — as much as two football fields — to catch small fish. They usually eat forage fish like sardines, anchovies and smelt, Piatt said. But those forage fish were sensitive to the change in ocean temperatures.

But the forage fish’s food supply was changing too. There wasn’t as much plankton for them to eat during the heat wave, Piatt said.

And because the blob was massive, close to the size of Canada, it wasn’t possible for forage fish to swim out of it for more food, said Julia Parrish, a marine science professor at the University of Washington who helped author the study.

On top of that, bigger predatory fish swimming in the warm waters ate the forage fish in higher quantities because they needed more food as well, leaving the murres with fewer options, Parrish said.

Finally, because the forage fish were also suffering from the lack of food, they did not satiate the murres as much as they had.

“To make a simplistic analogy, we went from Clif Bars to rice cakes,” Parrish said. “So you could eat the same volume, but you wouldn’t get as much nutrition.”

Parrish also runs the Coastal Observation and Seabird Survey Team, known as COASST, which trains volunteers in California, Washington and Alaska to survey beaches for bird carcasses. The new study used the information COASST and similar organizations collected to better understand how many murres might wash ashore normally and how many did during the die-offs.

Hannah Nevins, seabird program director at the American Bird Conservancy, said she is concerned about what more frequent marine heat waves might mean for seabirds in the long term.

“This study is important because it demonstrates the multiple stressors, top-down and bottom-up, that are at play when the marine ecosystem heats up," Nevins, who was not an author on the study, said over email.

[Why are birds and seals starving in a Bering Sea full of fish?]

Not only did the decline in forage fish lead to a massive die-off, it also meant surviving murres weren’t producing chicks, Piatt said.

The seabirds generally mate for life and live most of their lives at sea except to breed, when they return to rocky shoreline cliffs to lay eggs. One murre parent stays with the chick as another ventures out to sea to find meals for the chick.

When a chick is 3 weeks old, it hops into the waters below, and the father lives with the chick for two months, feeding it until it becomes independent.

After the die-offs began, some murre colonies failed to produce surviving offspring for several years. In Cook Inlet alone, one colony only resumed producing chicks in 2019, while another still hasn’t, Piatt said.

When murres are unable to support a chick, that means there isn’t enough food for them within a 100-mile radius of their colony, Piatt said. There were dozens of colonies along the Pacific coast after the blob began that couldn’t find enough food to raise chicks, Piatt said.

“That’s mind blowing. That, to me, is astonishing,” Piatt said. “There’s just never been anything like that in the past.”