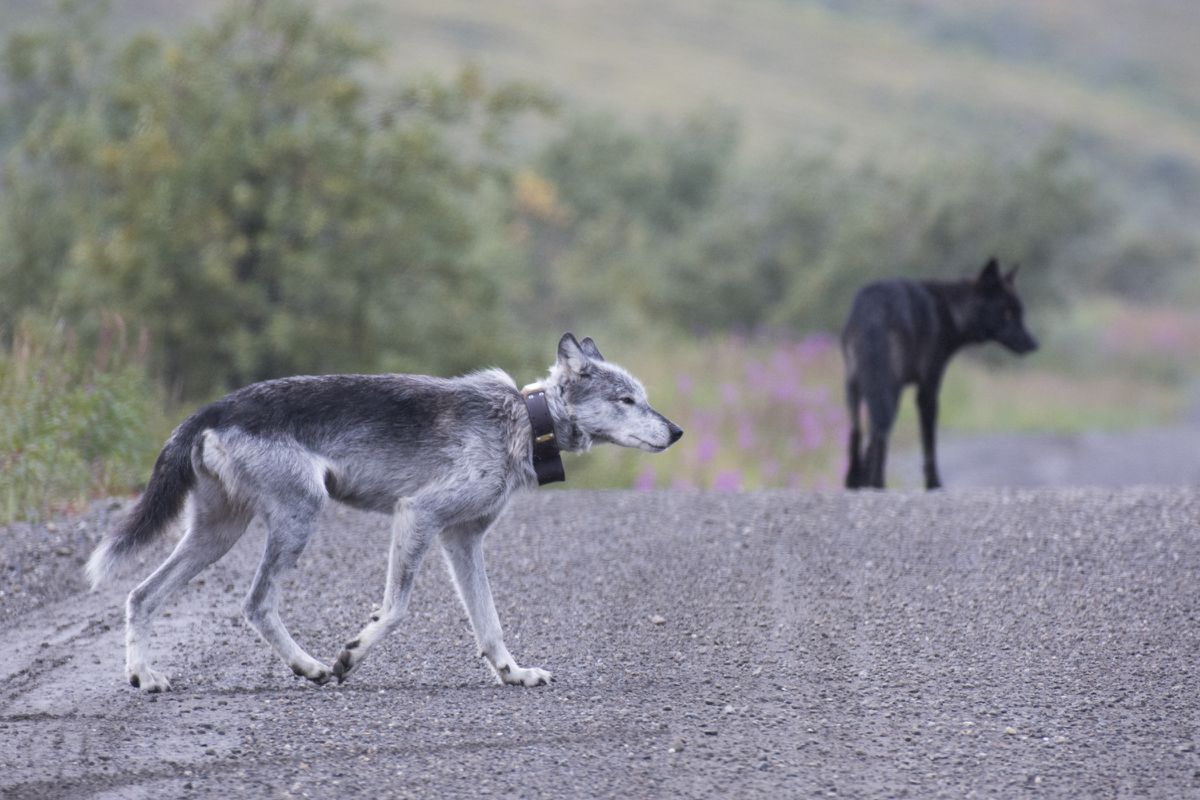 Riley the wolf on the Denali Park Road with one of her packmates in 2017. (National Park Service photo)

Riley the wolf on the Denali Park Road with one of her packmates in 2017. (National Park Service photo)

Riley the wolf has died. She lived in the wild until almost the age of 11, which biologists call a remarkable feat. Wolves are lucky to live to 6.

The female wolf, former leader of the once-mighty Riley Creek pack in Denali National Park and Preserve, drowned in an open lead of the Nenana River on March 9.

I wrote about Riley in February 2019, when I noticed her bobbing through the snow on the side of the Parks Highway not far from Healy and Denali National Park. The female wolf with the leather satellite-tracking collar surprised me by not running away or otherwise seeming to notice my car, idling 30 feet away. Then, she disappeared into roadside brush.

The next day, I drove to the headquarters of Denali National Park and met wildlife technician Kaija Klauder and wolf biologist Bridget Borg. Right away, they both knew the wolf. They called her 1202. I used the name Riley for my column.

The biologists knew a lot about the wolf, such as the location of the spruce tree Riley was born beneath in May 2009. They knew her mother, a dominant creature that led the East Fork pack for 10 years and had given birth to dozens of pups.

They knew Riley’s history, and personality, a lot better starting in March 2012, when park biologists darted her and fitted her with a satellite collar. The biologist who fired the dart wrote this note: “Aggressive to helicopter.”

Rather than living life as a passive member of her mother’s East Fork pack, Riley took the most extreme risk a wolf can — she split from the pack.

Defying the odds for lone wolves, which are at great risk of being killed by other wolves, Riley found a mate and then chose a den site close to the park road.

As Riley’s mother’s pack had shifted a bit north, Denali Park biologists declared hers its own group: the Riley Creek pack.

There began Riley’s upward arc. When she was 6, Riley gave birth to five pups in the same burrow in which she was born. The next summer, she used a different den, from which eight more of her pups survived.

The Riley Creek pack was up to 14 animals. And, led by Riley, they were fierce.

The Riley Creek pack scrapped with wolves from the Grant Creek pack, which hunted neighboring lands to the west and south. When the decisive battle ended, biologists found the dominant Grant Creek female dead, along with another female. Both dead wolves were missing a front leg, leading Klauder to say that the life of a wolf is “very Game of Thrones.”

Riley’s peak continued in the summer of 2017, when the wolf was 8 and silver-haired, and gave birth to five surviving pups. The pack was up to 17 wolves. (Wolf packs vary in number from two to 20, with an average of eight.)

The next winter, Riley’s mate died on state land bordering the Stampede Trail. The last location from the male black wolf’s collar was along a known trapline. After that wolf’s disappearance, the pack started to dwindle. By February 2018, the Riley Creek pack was down to seven or fewer.

In March 2018, Borg recaptured Riley and fitted her with a new collar. She weighed Riley in at 98 pounds, and noted her belly was round with meat.

Riley gave birth to pups in spring of that year, as a trail camera showed the 9-year-old wolf with pups that were playing together. A pilot reported seeing Riley that August, but he did not see any young wolves with her.

Recently, Klauder filled me in on what she knew of Riley’s life after I saw the wolf along the highway one year ago, when Riley seemed in rough shape.

“She spent last year associating with other wolves in her regular territory,” Klauder wrote by email. “The group did not den, and she continued avoiding use of her right rear leg.”

When I saw Riley, the wolf held its right rear leg in the air, not using it at all. That’s because it was broken, Klauder said after reading the necropsy report.

“Her leg injury was a fracture of both the tibia and fibula, which had ‘healed’ into a large bony mass,” she said. “On a human this would be equivalent to breaking both leg bones just below the knee. These injuries would have required substantial force, such as being pummeled by a moose or hit by a car.

“It's incredible to me that she went over a year with these injuries, maintaining a semi-normal wolf lifestyle — traveling long distances with her packmates, participating in hunts (though she did a lot of scavenging, and we assume she relied heavily on the healthy wolves to actually bring down large game).”

The wildlife veterinarian also found evidence of a very tough, long life. Riley’s teeth were worn; many were broken and infected. She had scars on the inside — her chest wall, lungs and liver — maybe from the same trauma during which her leg was broken. Riley had bone spurs and severe arthritis. She had placental scars from her many litters of pups.

Later in her life, starting about the time I saw her in spring 2019, Riley had started hanging out with two or three wolves in what the biologists still call the Riley Creek Pack. The Denali scientists recently collared two of them, both males.

“We don’t know if any of them are related to her, although we are in the early stages of a new genetic study, so someday we might know,” Klauder said. “But whether they are or not, it's likely that they benefited from her detailed knowledge of her territory.”

The biologists had an unusual opportunity with Riley, a wolf they knew since birth and one they saw often. Reading the necropsy report gave them even more appreciation for the silver wolf, said Borg.

“While people who saw her, like you, limping along the road, might have felt a pang of pity for her, even though her injuries were severe, she proved that she was a resilient and tough wolf until the very end.”