In Fairbanks, the state virology lab remains busy during a quiet time of pandemic 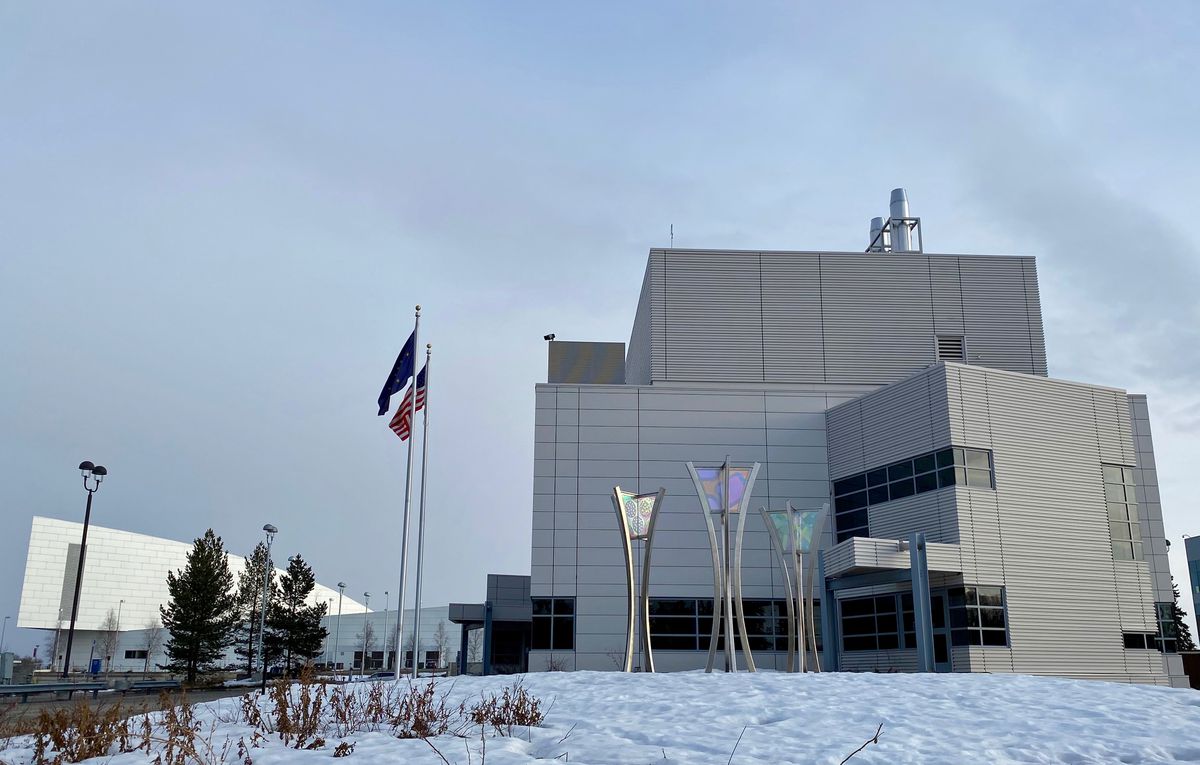 The Alaska State Virology Laboratory on the UAF campus. (Photo by Anna Rozell)

The Alaska State Virology Laboratory on the UAF campus. (Photo by Anna Rozell)

On these wet, mushy April days, as returning ducks set their wings for landing at Creamer’s Field in Fairbanks, spring breakup is proceeding as it always has. This year is different, though, noticed in the striking quiet of places that would usually be hopping.

One of those is the campus of the University of Alaska Fairbanks, where spring semester stopped in mid-March. Buildings there are locked and dark, with only the occasional person in possession of a key card walking in or out.

One exception to this is the Alaska State Virology Laboratory. Inside the building, people are busy testing swabs for COVID-19, the unseen entity that has taken over 2020.

For onlookers, this tidy structure off on its own is a bit of a mystery. The operators probably want it that way; inside, they process about 85,000 tests each year for HIV, hepatitis, the rabies virus, mumps, influenza and many other viral infectious diseases.

For the last month, workers in the lab have taken on COVID-19 testing. Workers there are now accepting courier-truck deliveries of long-handled swabs encased in plastic. Those swabs, from all over Alaska, have been deep within the nostrils of people who might have the SARS-CoV-2 virus.

Among the eight people confirming or denying the presence of the virus is Kyle Dilliplaine, a UAF research technician.

Dilliplaine is not an expert on viruses that affect humans; his degree work was on tiny creatures that live within the pore spaces of sea ice, and how they react to a crude-oil spill. (Thesis spoiler: They don’t like it.)

But he also has a skill that people at the lab needed: He is able to run diagnostic tests for COVID-19, using technical ability he developed at the Institute of Arctic Biology Genomics Core Laboratory. There, he runs a DNA sequencer. That sophisticated machine helps researchers find, for example, what gene an arctic ground squirrel expresses when it hibernates and lowers its body temperature below that of an ice cube.

When his supervisor, microbiologist Mary Beth Leigh, asked if Dilliplaine might help with COVID-19 tests in the virology lab, he said yes.

“I’m happy I can help,” Dilliplaine said in a recent phone interview. “It’s so busy over there, I feel bad for those people — they’re putting in so many hours.”

Jayme Parker manages the lab, including the dozen volunteers, some from UAF and others from Fairbanks Memorial Hospital.

“They have doubled our staff,” she said by email. “We couldn’t have done this without them.”

What they have done is detect more than 100 cases of COVID-19 from Alaska. Other labs around the state are doing the same, but most results are now coming from the Fairbanks virology lab.

People are working at the campus lab most nights until 10. The hours are longer, Parker said, but “we deal in outbreaks every year, so this seems somewhat normal.”

These days are not normal for Dilliplaine, who passes through two security doors to walk into the lab. He also has to outfit himself in a room-specific lab coat, gloves, eye protection and face mask for some tasks.

Dilliplaine could be at home watching Netflix and readying his master’s thesis for publication — and he is doing those things, as well as writing grant proposals for possible Ph.D. work — but he savors the structure he gets from working at the lab.

“I’m really happy to be working there and keeping active,” he said. “It’s nice to go and work X-number of hours.”

In addition to giving doctors results on COVID-19 tests, lab workers have been able to track where Alaska cases of the virus originated.

“Based on our viral genome analysis, Alaska COVID-19 were from various places, but mainly from the East Coast (of the U.S.)”, wrote Jack Chen, deputy director of the lab. “There were also at least two community transmissions.”

Parker, who remembers last year’s flu tests relating to a school shutdown in Southeast and an “enormous” mumps outbreak in Alaska the year before, said this year is different.

“This is the first time in human history that we’ve had a global pandemic lead to restricting this much human movement,” she wrote in an email. “We’ve seen decreases in specimens testing positive for other viruses. We suspect this is because of social distancing and extra precautions being taken at grocery stores and other public places. Shutting down schools has certainly helped with the spread of other viruses.”

These unprecedented actions are all because of the SARS-CoV-2 virus, which everyone knows about, but few people can picture. Dilliplaine tried to explain this tiny presence that has changed all our lives.

“It’s not a microbe,” he said. “It’s just this particle that, once it contacts your cells, it forces you to make copies of itself. It’s not reproducing outside of you. It’s just waiting for you.

“Every five to 10 years, we get some kind of new virus,” Dilliplaine said. “This one is really good at spreading.”

Where this all ends is anyone’s guess, but Dilliplaine will remember this unique work for the rest of his life.