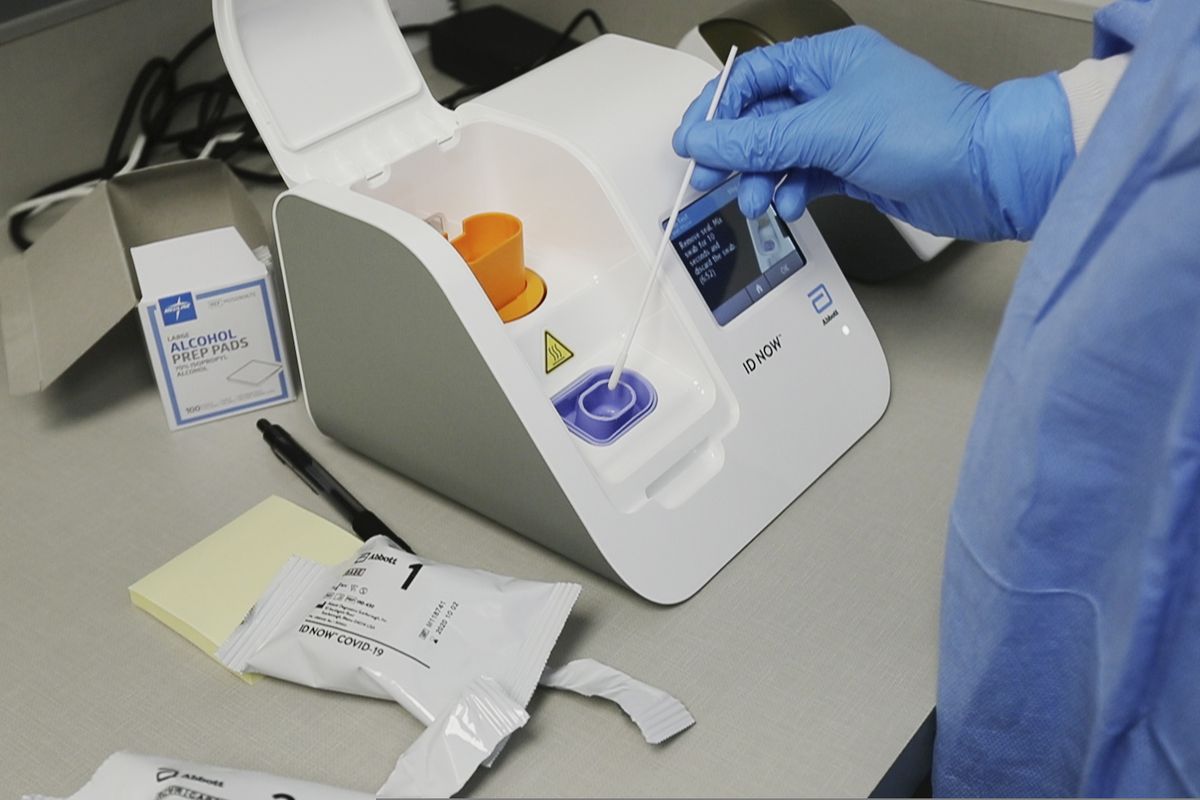 In this April 10, 2020, file image made from video, a lab technician dips a sample into the Abbott Laboratories ID Now testing machine at the Detroit Health Center in Detroit. Federal health officials are warning about potential accuracy problems with the rapid test for COVID-19 used at thousands of hospitals, clinics and testing sites across the U.S., including the White House. (AP Photo/Carlos Osorio, File)

In this April 10, 2020, file image made from video, a lab technician dips a sample into the Abbott Laboratories ID Now testing machine at the Detroit Health Center in Detroit. Federal health officials are warning about potential accuracy problems with the rapid test for COVID-19 used at thousands of hospitals, clinics and testing sites across the U.S., including the White House. (AP Photo/Carlos Osorio, File)

The state of Alaska’s public health labs are working to double-check results from rapid COVID-19 testing machines as concerns about their accuracy continue to swirl nationally.

There are 113 Abbott machines in Alaska, according to the state’s health department. Several Abbott ID NOW testing machines were distributed statewide to remote communities that needed faster test results. Previously, it took days or weeks to get results in some places, as samples needed to be flown to other labs.

A false negative — a test that says someone doesn’t have COVID-19 when they actually do — is the main concern. The FDA said it is still investigating some of the potential issues.

The state’s public health labs director, Dr. Bernd Jilly, said he has known about the false negative issues since the testing machines were first deployed. For that reason, they’re still asking that Abbott machine test results get sent to the state labs for follow-up testing.

Through Friday afternoon, out of 360 Abbott test results that the state’s public health lab has double-checked, one negative test ended up coming back positive during confirmatory testing, Jilly said.

“They had a very low viral load so it was right at the limit of detection of the Abbott machine,” Jilly said. “So it was not surprising that it came up negative.”

Through Saturday, 43,507 tests overall had been conducted in Alaska, according to the state health department.

Jilly said there are standard errors that come up in testing, and since the amount of virus in the test sample was so low, the instance didn’t concern him.

A recent pre-print of a study from New York University, which has yet to go through the traditional peer-review process for scientific research, showed high false negative rates in the Abbott machines when testing people in New York.

But in Alaska, where cases are low, “one would expect a negative result just based on the clinical picture of life here,” Jilly said.

In places where the disease is more prevalent, a lot of negatives would be more of a red flag.

Having to send test results to the state labs for confirmation doesn’t defeat the purpose of a rapid test, Jilly said, because if there is a positive result, it can be trusted as a positive right away. Then, public health officials can work to trace close contacts of the person with COVID-19.

“This test can still be used and can correctly identify many positive cases in minutes,” according to a statement from Tim Stenzel, who directs the FDA’s In Vitro Diagnostics and Radiological Health office.

Jilly said the rapid tests should be used if the answer needs to be known immediately, but if the results can be delayed, “the best thing to do is send it to the state lab.”

“We act as every positive is a true positive, because the risk of not doing so is too high,” Forbes said.

Initially, test results from other labs were taking as long as two weeks for some patients, said Dr. Alisa Alexander, acting medical director at Tanana Chiefs Conference, which serves 42 tribes and has clinics in 26 villages.

The advent of the Abbott machine has sped up TCC’s ability to do swift contact tracing and isolate people who have tested positive.

If a negative result turns up for someone who seems like they may have COVID-19 symptoms, traveled recently or has been in contact with a positive case, Alexander said they’ll send the test to a state or commercial lab for confirmation.

If someone is at a high risk for complications from the disease or is potentially interacting with a lot of people in the community, they’d also send in the samples to get reconfirmed, she said.

They might also repeat the test again the next day. But results could vary depending on how much virus someone has in their system, she said.

Some communities, like Tok and Galena, have their own Abbott machines, Alexander said. Other communities don’t have machines, so people are swabbed by a health aide in a clinic instead. Some villages don’t have health aides, so TCC walks individuals through the testing process themselves.

"Those samples will get sent into our clinic by the plane and then run on the Abbott ID NOW analyzer in our clinic in Fairbanks,” Alexander said.

Even if a negative result also comes from the state, Alexander said they’d advise someone who has traveled recently or has been around large groups of people to stay home, wear a mask and call them if they develop symptoms.

“All the tools that we have available to us right now are not perfect," Alexander said. "And there’s still a lot that as a medical community we need to learn about this disease.”

Wearing masks, social distancing, limiting how many people you interact with — those are all critical to protecting communities, Alexander said. Testing is just one part of the overall strategy.