Wildfires are way down this year, but Interior Alaska heat wave expected to bring new blazes 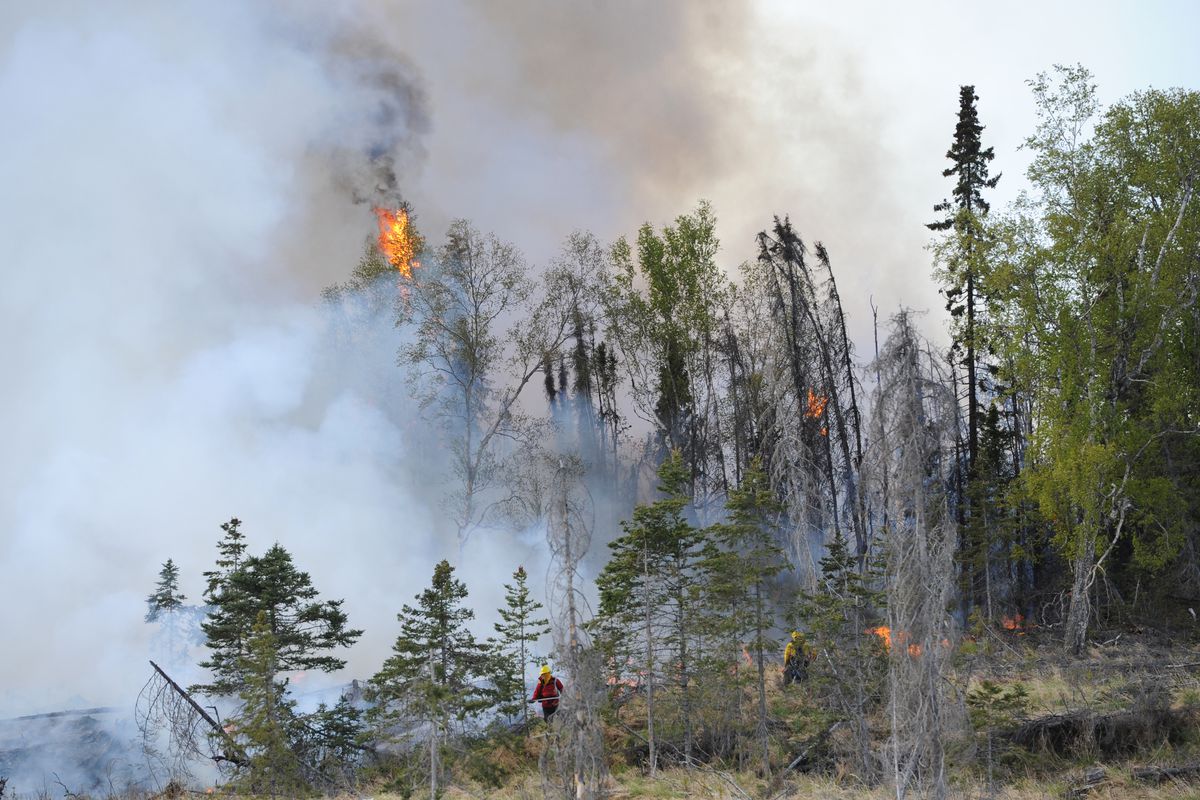 The Sunrise fire near Meadow Lakes in early May is among the wildfires that have sprung up in Alaska in 2016, which so far has seen a much more manageable fire season than the intense summer of 2015. (Bill Roth / Alaska Dispatch News)

The Sunrise fire near Meadow Lakes in early May is among the wildfires that have sprung up in Alaska in 2016, which so far has seen a much more manageable fire season than the intense summer of 2015. (Bill Roth / Alaska Dispatch News)

Officials are anticipating new wildfires this week as near-record temperatures are forecast for Alaska's Interior, amid a fire season that's so far been much more manageable than last year's intense summer.

Christopher Cox, a lead forecaster at the National Weather Service office in Fairbanks, said in a phone interview that Tuesday was just "the first day of this heat wave."

"Temperatures are going to be into the 80s over a large part of the Interior today, and we expect that to continue into Friday," Cox said. "It'll be near-record-breaking for a lot of locations throughout the Interior."

Conditions during the week, including a dip in humidity, will lead to "relatively increased fire concerns," Cox said, although thunderstorms — a key natural cause of wildfires — will likely be limited to the eastern and southern Interior.

Beth Ipsen, a spokeswoman with the federal Bureau of Land Management's Alaska Fire Service, said Tuesday that officials were expecting some lightning-caused wildfires over the rest of the week. Conditions have been much less conducive to fire, however, with much of the state seeing rain and relatively few areas seeing prolonged dry periods.

"We'll see some starts, but they won't get out of hand because they won't spread quickly and we've seen sporadic cloud cover," Ipsen said.

Ipsen said the conditions have led to dramatically better Alaska fire statistics this year than last year, including 134,000 acres burned statewide as of Tuesday. By July 12, 2015, officials had tracked 4.18 million acres burned, in a year which included the devastating Sockeye and Card Street fires near Willow and Kenai respectively.

A relative lack of lightning has been behind much of the change, which has left fire crews fighting three fires statewide as of Monday versus 28 on the same day a year ago. This year, Ipsen said Alaska has seen 103 lightning-caused wildfires versus 368 last year.

"They're the ones that typically burn a lot of acres, because they strike in remote areas and we tend to let them burn," Ipsen said.

Crews are being removed this week from the Alatna Complex fires near Alatna and Allakaket, Ipsen said, and firefighters are working with villagers to mop up a fire at the dump in Mountain Village. A dozen firefighters are protecting cabins from the Iniakuk Lake fire about 42 miles northwest of Bettles.

Smokejumpers have been prepositioned in Galena to respond to any new wildfires in Western Alaska, where Ipsen said officials have seen some prolonged dryness.

"We're gonna have a bit of an uptick, but it's going to be manageable," Ipsen said.

In other good news for fire conditions, this week's Interior heat wave isn't expected to stretch on for long.

According to Cox, prevailing conditions over the Interior will give way to a mass of cold air arriving over the Brooks Range from the north. Projections of how far south those cooler conditions might move, or how cold temperatures might get, still weren't solid Tuesday.

"We have a large, upper-level high-pressure system that's building in over the state from the south and the southwest, and that's what causing the high temperatures," Cox said. "We are expecting a low-pressure loft to move in from the high Arctic over the weekend, and we'll swing to significantly below normal (temperatures)."