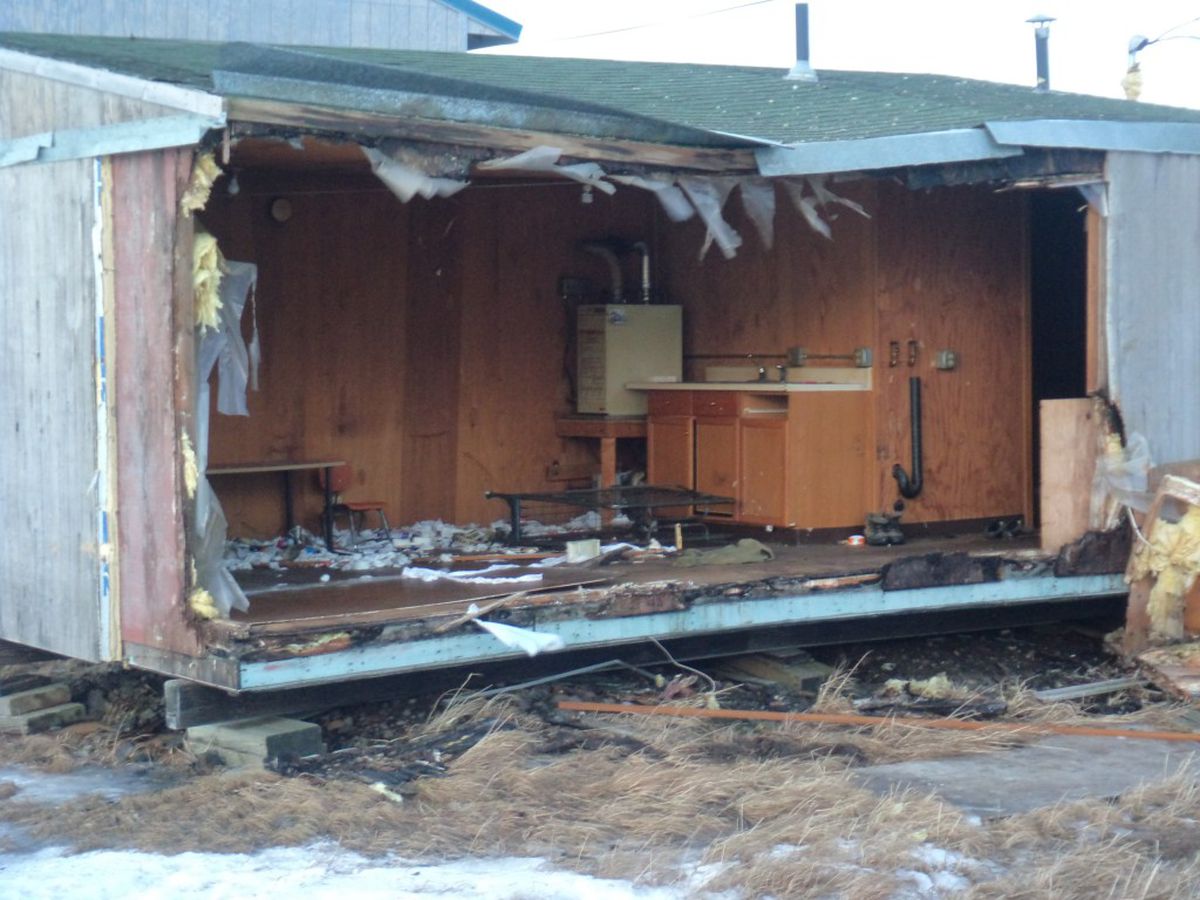 State officials say about 30 homes in Savoonga, on St. Lawrence Island in the Bering Sea, were damaged, including lost roofs, during a pair of winter storms that swept through Western Alaska during the final week of 2016. (Courtesy City of Savoonga via DHSEM)

State officials say about 30 homes in Savoonga, on St. Lawrence Island in the Bering Sea, were damaged, including lost roofs, during a pair of winter storms that swept through Western Alaska during the final week of 2016. (Courtesy City of Savoonga via DHSEM)

Alaska officials are traveling to the Bering Sea village of Savoonga to assess widespread damage done by hurricane-force winds during successive winter storms at the close of 2016, one of the initial steps in a potential state disaster declaration.

Jeremy Zidek, a spokesman for the state Division of Homeland Security and Emergency Management, said two emergency managers will travel Thursday to the St. Lawrence Island community of about 725 people, roughly 165 miles west of Nome. Their visit, expected to last until Sunday, comes in response to a "verbal disaster declaration" Zidek said was issued by local authorities over the New Year's weekend.

"What we've heard from the community is that there were about 30 homes that were damaged by high winds," Zidek said. "Some of them have had some roofing material, whether that's rubber roofs or metal roofs, torn off. We've seen a photo of a building that had part of the roof and one wall torn off as well."

Savoonga's city hall and a local church also suffered roof damage during the storms, Zidek said. About half a dozen homes had lost power by Tuesday, prompting the Alaska Village Electric Cooperative to send two linemen for repairs.

"So far, the reports we've gotten is that Savoonga was the hardest hit," Zidek said. "Usually with these storms, one hits and people have time to recover."

Savoonga resident Denny Akeya was resting in his home on the night of New Year's Eve when he heard a loud bang from outside, where powerful winds were wreaking havoc, he said.

Akeya went to check for damage, and as he predicted, the winds had torn the metal sheeting off the top of his house. His radio antenna also had been "snapped like a twig," he said.

The roofing material appeared to have tumbled between neighboring homes and did not cause any other damage. Akeya and a relative rolled up the sheeting and secured it, he said.

Elsewhere in town, plywood with the nails still attached had been ripped from homes and tossed onto the streets; one board went through someone's window, he said.

Several families took shelter in the local school but otherwise people stayed put, Akeya said. When the winds died down, everyone started picking up the pieces.

"Everyone is pitching in and helping out," he said. "That's why I love living in this town."

Don Aycock, a meteorologist at the National Weather Service office in Fairbanks, said reports from Savoonga of 80 mph winds and local buildings "losing roofs" came in Saturday, during the second storm. The first storm system, which went on to blanket Fairbanks with about a foot of snow overnight Thursday, hit Savoonga on Dec. 28 – but there were far fewer local reports of damage from it.

[ Anchorage misses worst of snowfall from storm passing over Alaska ]

"The situation was not as bad as on Friday and Saturday," Aycock said.

The Red Cross will also send representatives to Savoonga in the coming days and help assess logistics in the wake of the storms, Zidek said.

During the visit, the state officials will be gathering information and preparing a fact sheet for Gov. Bill Walker and his cabinet as they consider whether to issue a state disaster declaration unlocking state assistance. A state declaration would in turn make possible a federal disaster declaration by the president, allowing the Federal Emergency Management Agency to step in.

On Tuesday, the division activated its State Emergency Operations Center in Anchorage. Zidek said staff members have been encountering widespread communications issues across the storm area as they try to check in with communities.

FEMA officials have been briefed on the situation and the Homeland Security team has been in touch with Kingeekuk, the Savoonga mayor, as he coordinates the city's disaster response.

"He is probably the busiest man in Alaska right now," Zidek said.