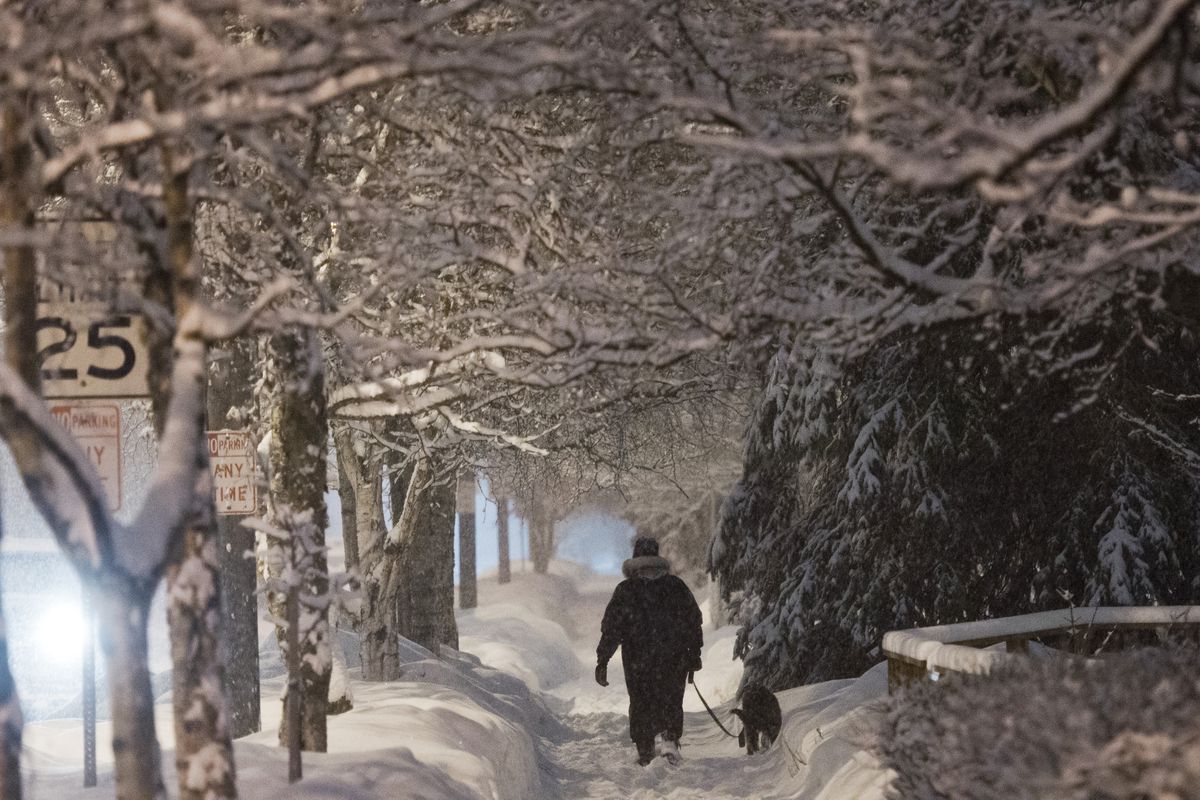 A dog gets walked on the snowy sidewalk along G Street near downtown Anchorage on Wednesday. Several inches of snow fell overnight, causing the Anchorage School District to close schools due to road conditions. (Marc Lester / Alaska Dispatch News)

A dog gets walked on the snowy sidewalk along G Street near downtown Anchorage on Wednesday. Several inches of snow fell overnight, causing the Anchorage School District to close schools due to road conditions. (Marc Lester / Alaska Dispatch News)

Anchorage's dreams of an early spring were dashed Wednesday as a relentless late-season snowfall pummeled the city, closing schools and causing more than 100 crashes along suddenly icy streets that just days earlier had been clear and dry.

Anchorage police dispatchers had received reports of dozens of vehicles in distress and accidents around the city by early Wednesday afternoon, according to police spokeswoman Renee Oistad.

"It's really flat light conditions," she said. "You can't tell where the road ends, the ditch begins — it all looks like one surface."

By Wednesday night, the totals for vehicles in distress, non-injury and injury vehicle wrecks had climbed to 110, 108 and 13, respectively, Oistad said. None of the accidents involving injuries were serious, she said.

And later in the day, crashes shut down roads on the Anchorage Hillside, police said.

The winter weather prompted staffers at Anchorage schools to start checking the roads in the early morning hours, ultimately leading to the superintendent's call for closure.

Tom Roth, the Anchorage School District's chief operating officer, said the school district follows a specific plan when winter weather rolls in. This time the plan started Tuesday with a call to the National Weather Service office for an in-depth forecast.

Roth said the district's transportation director organized a safety team to drive around the municipality starting around 3 a.m. or 4 a.m. Wednesday, traversing roads from Chugiak to Girdwood. They reported rain falling on ice in Girdwood and snowfall throughout Anchorage, with uncleared roads.

The team's reports were consolidated, including information gathered from calls to Anchorage police and the state Department of Transportation. The transportation director called Roth, who then called Superintendent Deena Bishop at 5 a.m. Wednesday with a recommendation: Close the schools.

"There is a science to it," Roth said of the district's process, "but at the end of the day, it really comes down to using your best judgment on what is going to be safe, not just for the bus and students, but for the motoring public, too."

He said the district often faces pushback regardless of the ultimate decision. Any prior public criticism about not closing schools did not impact Wednesday's decision, he said, nor did that fact that certain grades were scheduled to take the statewide standardized test

"These are consequential decisions that we don't take lightly," he said of the decisions to close schools or keep them opened. "Our underlying motivation is, and will always be, the safety of our kids, our drivers and the broader public."

Heidi Embley, school district spokeswoman, said students will have time to make up the missed day of testing.

Around 4 p.m., between 8 and 12 inches of snow had been reported across Anchorage, Weather Service meteorologist Rebecca Duell said.

Meteorologist Sam Albanese said the snowfall was stopping around 8:30 p.m. Less than an inch was predicted to fall overnight, he said.

Warmer temperatures were forecast for the remainder of the week, Albanese said.

"It's going to be warming up Thursday, into the mid-30s, and then by Friday we'll enter a (dry and warm winds) type of event, with temperatures into the mid-40s," Albanese said.