Alaska’s weird, warm fall: a boon for farmers, but ‘really scary’ for people who depend on Arctic ice 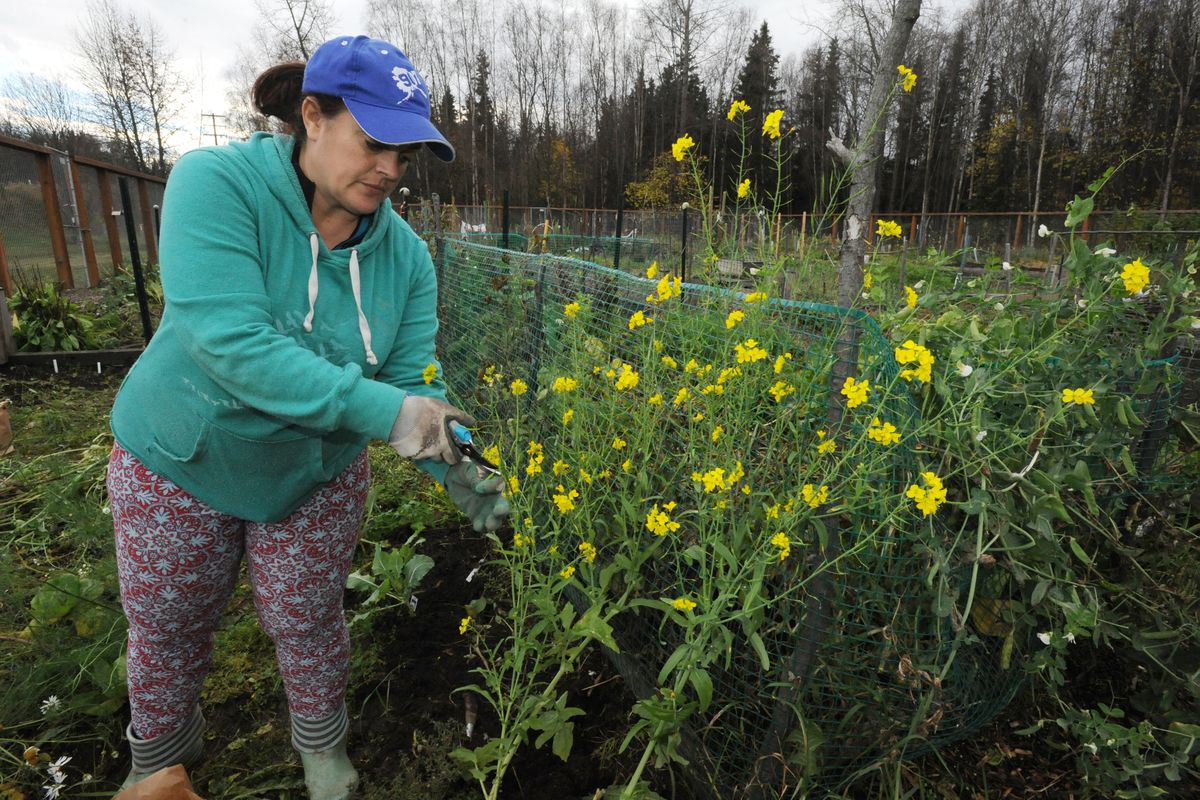 Kristi Trimmer spent the afternoon harvesting seed pods and vegetables at her plot in the C Street Community Garden on Sunday, Oct. 21, 2018. Because of the late fall weather Trimmer said she was able to harvest radish pods, carrots, beets, parsley, thyme, chamomile and spinach seeds for an additional three weeks. (Bill Roth / ADN)

Kristi Trimmer spent the afternoon harvesting seed pods and vegetables at her plot in the C Street Community Garden on Sunday, Oct. 21, 2018. Because of the late fall weather Trimmer said she was able to harvest radish pods, carrots, beets, parsley, thyme, chamomile and spinach seeds for an additional three weeks. (Bill Roth / ADN)

Berries still fresh on the tundra in Nome.

Several weeks into October, there was no ice at all in the St. Lawrence Island village of Savoonga, where the Siberian Yupik word for the month translates to "freezing-up time."

"It's not freezing up," said Delbert Pungowiyi, Savoonga tribal president. "Normally, we'd be able to cross the rivers and lakes."

For some, the weirdly warm weather is a novelty — an extended season for leisurely walks and frost-free windshields, where usually there are two weeks of yellow leaves and mild temperatures before the icy grip of winter descends.

But for others, the lack of subfreezing temperatures and no snow as Alaskans head into the normally brisk Halloween season is unsettling.

Nome was 13 degrees above normal for the first half of October.

Longtime resident Sue Steinacher was still picking cranberries and crowberries on the tundra days ago. There's been no hard frost to deflate them.

But she wonders what that bodes for winter.

"For me the biggest concern is the ice and how lack of ice so badly impacts our villages, both in terms of shoreline erosion and being able to hunt safely," Steinacher said. "Without ice, then you have to travel much further and you're at risk of being caught in rough seas because there isn't the ice to hold the seas down."

This fall in Alaska is strangely normal — for the Lower 48.

Actually, it's colder down there.

[Support local journalism in Alaska. Subscribe to the Anchorage Daily News and adn.com]

Climatologist Brian Brettschneider compiled a graphic showing weather stations across North America with temperatures lower than Anchorage's: The map shows a dense web of blue dots all the way down to central Texas.

The lowest temperature in Anchorage, Alaska, through October 15th is 38°F. Here's a map of places that have seen a lower temperature than Anchorage (37°F or colder). #akwx @AlaskaWx @DaveSnider @NWSAnchorage pic.twitter.com/rv5Iy7BlMh

Alaska, meanwhile, is accumulating a series of stunning weather factoids related to the absence of cold.

Anchorage is setting record high temperatures and is already days past the record for latest freeze of the year. Fairbanks is experiencing its latest snow-free fall. Kotzebue set a record for days without frost in mid-October.

Forecasters warn that Alaska's "freakishly nice" fall weather has resurrected the warm-water "Blob" in the North Pacific Ocean, leading to the possibility of stormy wintry weather for the Lower 48 if it persists.

Most of the state is "running way above normal" this month, said climatologist Rick Thoman. A massive high-pressure system camped out over the Bering Sea last month gave way to a low-pressure system that dumped heavy rains on the Gulf of Alaska and brought more mild weather to much of the state.

The record-breaking warmth is part of a much longer trend that started five years ago, Thoman said.

"Not every month, but the vast majority since June 2013 have been warm," he said.

For Arctic coastal residents eager for the annual fall formation of sea ice to carry hunters and protect erosion-prone shorelines, the weather is a grim reminder that a changing climate may be here to stay.

Sea-surface temperatures in the Chukchi and Bering seas are "exceptionally warm," Thoman said. On the Bering, what ice there is is going to be thinner, and more vulnerable to breakup. A very late freeze-up is likely on the Chukchi.

"Our way of life is literally melting right before our eyes," said Pungowiyi, who is headed to a London international maritime conference this month to report on climate change from the front lines.

He pointed to a recent National Oceanic and Atmospheric Administration survey that showed what the Nome Nugget newspaper described as a "shocking" loss of the cold pool of water off St. Lawrence Island that normally holds cod to warmer waters in the southern Bering Sea.

No snow in the Golden Heart City

Snow finally fell in Fairbanks this weekend. The National Weather Service recorded about a tenth of an inch at the airport on Saturday — enough to count as "measurable snowfall" — and about a half-inch in North Pole. Temperatures just above freezing melted most of what fell.

That marked the latest snowfall on record for the Interior city that usually gets about 10 inches of snow in October.

The snow-free terrain marked a disturbing milestone for Carl Benson, a professor emeritus in geology and geophysics at the University of Alaska Fairbanks Geophysical Institute, where he's taught since 1960. In earlier years, he'd be doing research in the real thing outside.

"In the past we used to have a pretty good snow cover by now," Benson said. "We had research projects that certainly would be started by October."

The balmy fall season in much of the state isn't just a warm day or a warm month, he said. "When you piece all these together, things have changed."

Utqiagvik was 9 degrees above normal for the first half of the month.

Photographer Bill Hess lives in Wasilla but for decades has made frequent trips to Utqiagvik. He was there this month when a whaling captain and crew member died in an accident towing a bowhead home and returned for their memorial services.

Hess said people even in their grief were talking about how warm it was.

"When I first started hanging out regularly in Barrow over 32 years ago, by the third week of September the ground was always covered in snow that would stay till May or even June," he wrote in a message Thursday. "Subzero temps by now."

Anchorage set a record for the latest first freeze on Oct. 16. The municipality was 9 degrees above normal for the month through mid-October.

Residents in Anchorage and Mat-Su still have green grass growing on lawns and flowers outside.

Anchorage gardeners report lilacs blooming not once but twice this unseemly long fall. They're wondering when to pick the peas and carrots.

The past years of warmer temperatures make for a growing season that's three weeks longer than when VanderWeele planted his first seeds decades ago.

"They said you have to have all your crops out the first of September," he said. "You get the north winds and it never thaws again."

"What's weird about it?" he joked. "One thing Alaska has always done, it's got a mind of its own. It's gonna do what it's gonna do."

Cramer said he doesn't start looking at the weather forecast to see when snow-making can start until Halloween. That's when he starts expecting at least a little snow.

Until then, he's making the best of the warm weather.

"And everybody's going to be telling me come that 20-below day that it's too cold out," he said.