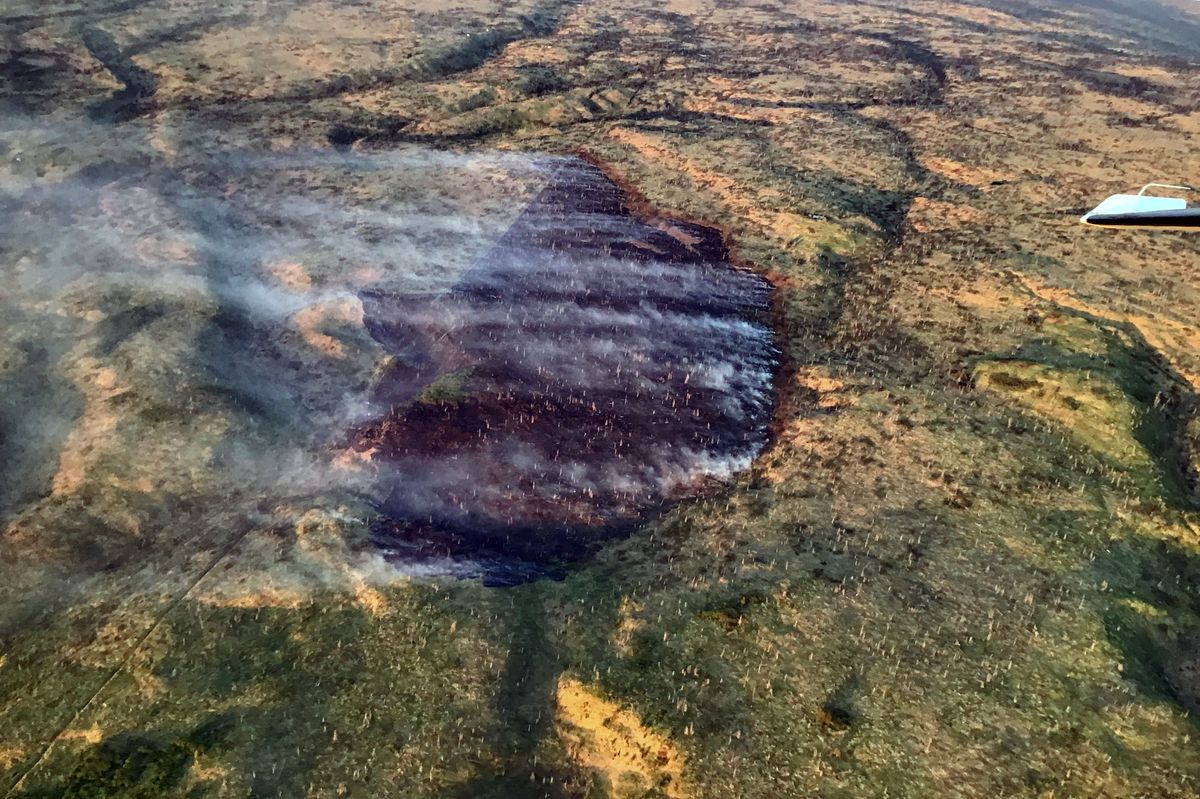 A lightning strike ignited a forest fire 10 miles south of Tustumena Lake on the Kenai Peninsula on Wednesday. Within two days, the fire had spread to consume 126 acres. (Photo courtesy Alaska Division of Forestry)

A lightning strike ignited a forest fire 10 miles south of Tustumena Lake on the Kenai Peninsula on Wednesday. Within two days, the fire had spread to consume 126 acres. (Photo courtesy Alaska Division of Forestry)

Four wildfires of varying size burned throughout the Kenai Peninsula this week, though there’s no danger at this point to anyone living or recreating in the region, a forestry official said.

Meanwhile in Anchorage, residents were seeing smoke from the largest of those fires filter in starting Friday evening and continuing into Saturday.

The Swan Lake Fire in the Kenai National Wildlife Refuge northeast of Sterling grew from 200 acres Thursday to more than 470 acres by Friday evening, according to Beth Ipsen, a spokeswoman for the Alaska Fire Service.

Smoke from that fire drifted into the Anchorage area over the weekend. The Anchorage Fire Department is advising people not to call 911 unless they see an active fire or smoke. (Smoke predictions around the state can be found at the University of Alaska Fairbanks Wildfire Smoke Prediction site.)

Thunderstorms over the Kenai Peninsula earlier this week ignited more lightning-caused wildfires in three days than the region normally sees in a year.

However, none were close enough to roads or population centers to put anyone in danger, including people driving down to the peninsula for recreation over the weekend, said Howie Kent, fire management officer for the state Division of Forestry Kenai Peninsula region.

Kent said out of the roughly 60 fires the peninsula sees annually, only one or two each year are caused by lightning. Fire crews have already knocked down one blaze near Mile 70 of the Sterling Highway, but four more were still burning as of Friday afternoon.

The Swan Lake fire is burning in an area of the Kenai National Wildlife Refuge that’s classified as “limited,” meaning that any fire that ignites there naturally will be allowed to burn without intervention, according to the Division of Forestry.

“We’re anticipating that that fire will continue to move for the unforeseen future,” Kent said.

Right now, the state Division of Forestry and the U.S. Fish and Wildlife Service are monitoring the fire’s spread but won’t intervene unless it begins threatening homes or other infrastructure.

Kent said the fire is unlikely to spread into any populated area, though. To reach the nearest houses, which are 7.5 miles away on the outskirts of Sterling, the fire would have to cross Moose River and a number of other barriers.

Moreover, winds in the area typically blow from the southwest, which make the fire more likely to be pushed away from town, Kent said.

“The fire spread at this point has been from west to east, so it’s going away from where anybody lives,” Kent said.

A column of smoke from the fire was visible throughout the peninsula and as far north as the Anchorage Hillside on Friday.

A separate, much smaller fire is also burning in the wildlife refuge about 4 miles northeast of the Swan Lake fire, roughly 12 miles from Sterling. By Friday morning it was only a tenth of an acre, Kent said. Firefighters weren’t intervening in that fire at this point, either.

Farther south on the peninsula, about 50 firefighters were battling a fire that’s consumed 126 acres about 10 miles south of Tustumena Lake. That fire has been completely contained and was expected to be fully extinguished over the weekend.

Although there are some cabins within a few miles of the fire’s perimeter, none of them were immediately threatened by the blaze, Kent said.

About 6 miles north of that, another much smaller fire spanning just over an acre was burning near Kolomin Lake. Six people were battling that blaze Friday, and Kent said he expected it to be contained by the end of their shift.

There are no burn restrictions in place at this point, but he cautioned anyone making a fire to ensure it’s completely extinguished.

“We don’t need any more fire on the ground than we already have out there," he said.