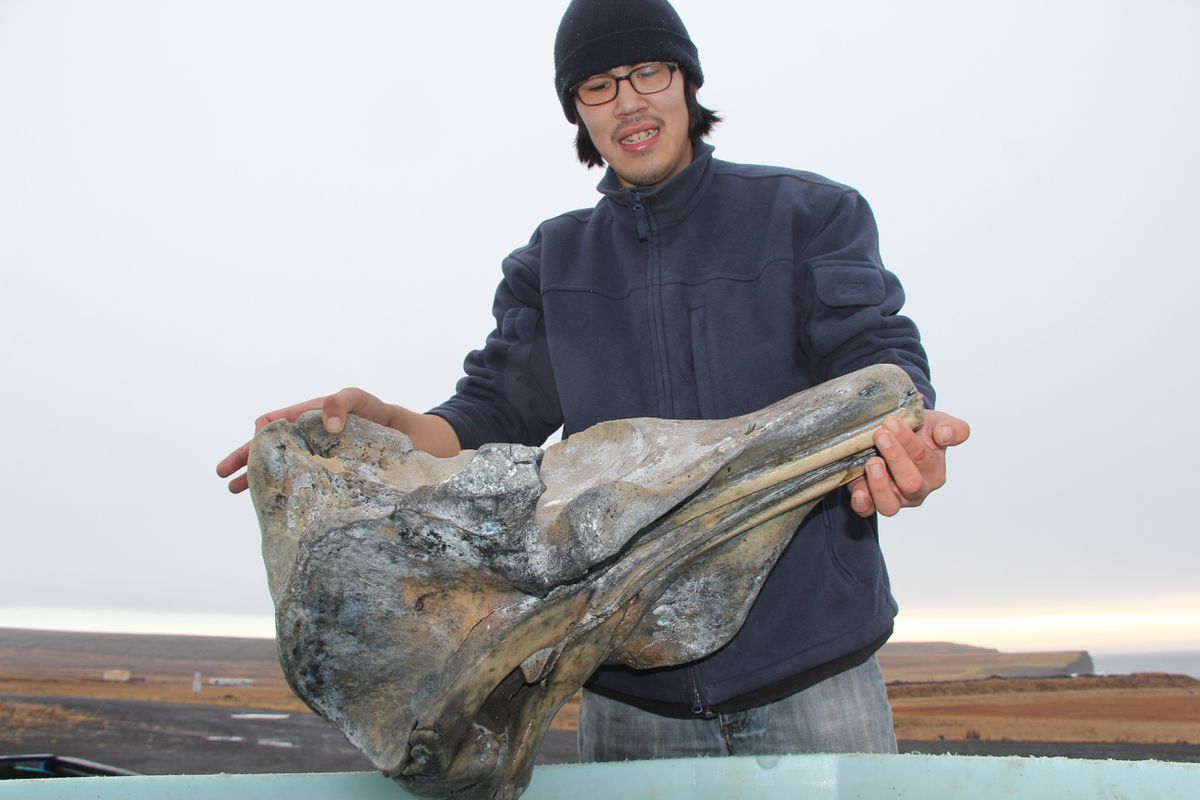 A stroll on the beach of a remote Bering Sea island two years ago has produced a scientific breakthrough — the discovery of a previously unidentified species of beaked whale that dwells in the deep waters of the North Pacific Ocean.

The conclusion, described in a study published in the journal Marine Mammal Science of the California-based Society for Marine Mammalogy, stems from the 2014 discovery of a beached whale carcass by a local monitoring organization, program called St. George Traditional Council Sentinel Program, part of a regional network. Karin Holser, a teacher on St. George Island in the Pribilofs, and others alerted authorities, and Michelle Ridgway, a Juneau-based biologist involved with a Pribilof science camp, responded quickly.

"She was the one who said, 'This looks like a Baird's beaked whale, but it doesn't,'" said Phillip Morin, a research molecular geneticist with the National Oceanic and Atmospheric Administration and lead author of the new study.

The whale was about two-thirds the size of a Baird's beaked whale, which typically grows to 35 or 40 feet, Morin said. It was clearly not a juvenile, as its teeth were worn and yellow, "so they were not baby teeth," he said. Its skull had a distinct slope and its dorsal fin was different from that of the typical Baird's beaked whale.

Tissue samples were sent to the Marine Mammal and Turtle Division of NOAA Fisheries' Southwest Fisheries Science Center in California, where Morin works and where the world's most extensive collection of cetacean tissues is kept. The whale's skull was sent to the Smithsonian Institution in Washington — and students from the Pribilofs visited the lab there to take part in the examination.

DNA analysis showed it was a species different from the 22 previously known species of beaked whales in the world and the two known to swim in the North Pacific.

Beaked whales, which have teeth and distinctively elongated beaks, are fairly mysterious, Morin said. "The thing about beaked whales is they're very elusive," he said. They spend a lot of time underwater, swim deeper than 3,000 feet and feed on squid and other deep-dwelling animals, he said. They do not jump around or spray noticeably when they rise out of the water, he said.

"They're hard to see when they come to the surface," he said. "They're very cryptic."

This newly identified species, with an official name yet to be bestowed, is even more mysterious and extremely rare, he said. It probably lives off the continental shelf, he said. It might travel to the tropics, as the carcass found on the coast of St. George had distinctive body wounds that appeared to be made by cookiecutter, or cigar, sharks, creatures that dwell in the tropics and subtropics. "Aside from that, we don't really know," he said.

But in a way, it was hiding in plain sight.

A whale skeleton hanging in Unalaska High School turns out to be a member of this newfound species. That skeleton was from a whale carcass found on a nearby beach in 2004. At the time, it was believed to be a small Baird's beaked whale.

Another whale skeleton, now in the Smithsonian, also turns out to be a member of the newly discovered species, Morin said. That skeleton is from a dead animal found in Unalaska in 1948, he said.

And of the 178 beaked whale tissue samples in the NOAA lab, eight matched the new species.

Even before Holser came across the dead whale at St. George, there was speculation in Japan there was something different about the smaller, darker beaked whale found in the region. Scientists examining eight tissue specimens, from three dead whales found off Hokkaido and from whales found in the Aleutians, discovered a genetic pattern that suggested a possible distinct species, not just a DNA variation. Their findings were contained in a study published in 2013 in Marine Mammal Science.

Japanese experts, St. George locals like Holser and students on the neighboring island of St. Paul, along with Morin, Ridgway and the other 14 co-authors of the new paper were among the crowd of people involved in positively identifying the new and unnamed beaked whale. They included experts from Britain, Russia and France, making it an international effort. "I would conservatively say probably over 100 people were involved in one way or another with this," Morin said.

The new species has yet to be formally named. In Japan, there is informal use of the name karasu – meaning "raven" – for the smaller, darker whales that had previously been thought to be part of the Baird's beaked whale population. In Alaska, Ridgway has come up with a suggested name, Beradius beringiae, in honor of the Bering Sea discovery site.

This is not the only recent biological discovery in the Pribilof region — and not even the only one in which local students played a role.

The youths in the science camp have discovered a rare form of kelp and made some findings about the life history of king crab in the region.

More discoveries are likely in the future, Morin said.

"There's still a lot that we don't know in the ocean, but especially in the Pribilofs where you've got these very deep canyons, a lot of habitat and not a lot of human activity in much of the year," he said.

Correction: An earlier version of this story stated that Karin Holser discovered the whale carcass. The carcass was found by a local monitoring group and reported to NOAA by Holser.